Accessibility links
Amish Forgive School Shooter, Struggle with Grief A tragic school shooting left an Amish community devastated, but not resentful. But the ability to forgive doesn't mean that the families have been able to quickly get over their grief. 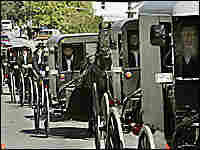 A funeral procession for one of the victims of the Amish school shooting makes its way through the town of Nickel Mines, Pa., Oct. 5, 2006. Timothy A. Clary/AFP/Getty Images hide caption 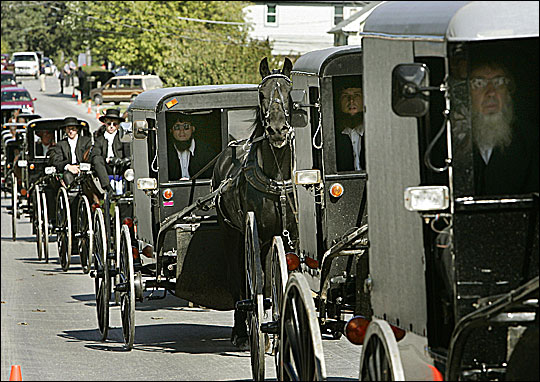 A funeral procession for one of the victims of the Amish school shooting makes its way through the town of Nickel Mines, Pa., Oct. 5, 2006. 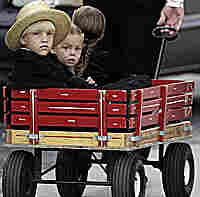 Amish children arrive in town to attend the funeral of one of the school shooting victims in 2006. Timothy A. Clary/AFP/Getty Images hide caption 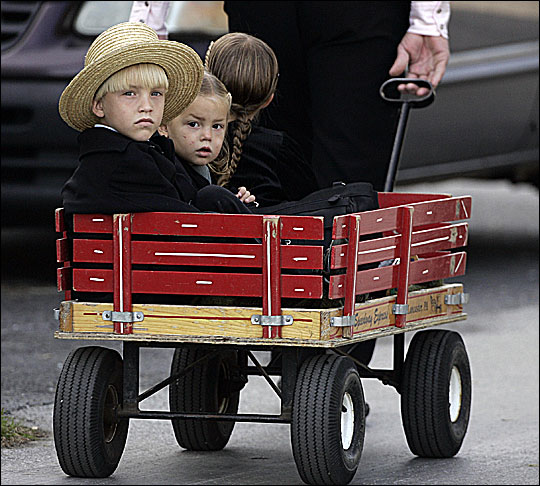 Amish children arrive in town to attend the funeral of one of the school shooting victims in 2006.

It's been a week for quiet reflection in the Amish communities around Nickel Mines, Pa., which one year ago experienced tragedy.

It was in the tiny community that a man stormed into a one-room schoolhouse and shot 10 young girls, killing five. He then killed himself. That old school has since been demolished. The new school was closed on the one-year anniversary and families met privately in prayer.

Since the tragedy, people around the world have been inspired by the way the Amish expressed forgiveness toward the killer and his family. But while their acts of forgiveness were inspiring, they also caused a misperception that the Amish had quickly gotten over the tragedy.

Charles Roberts wasn't Amish, but Amish families knew him as the milk truck driver who made deliveries. Last month, it was announced that the Amish community had donated money to the killer's widow and her three young children.

It was one more gesture of forgiveness, gestures that began soon after the shooting.

Donald Kraybill, is a sociologist at nearby Elizabethtown College and co-author of Amish Grace: How Forgiveness Transcended Tragedy.

"I think the most powerful demonstration of the depth of Amish forgiveness was when members of the Amish community went to the killer's burial service at the cemetery," Kraybill says. "Several families, Amish families who had buried their own daughters just the day before were in attendance and they hugged the widow, and hugged other members of the killer's family."

The misperception that the Amish had quickly gotten over the tragedy was one of many about the community, according to Jonas Beiler, the founder of the Family Resource and Counseling Center.

Beiler says there's another myth about the Amish: that they don't use electricity or drive cars, and that they don't seek mental health therapy. Beiler's is one of the handful of counseling centers that have been used by local Amish.

Beiler and his therapists have counseled many people in the Amish community in the wake of the school shooting. A year later, some family members are still startled by the sound of a helicopter overhead. Survivors, including some of the older boys who were let go by the killer, now wonder if somehow they could have stopped the massacre.

"We've talked to these people," says Beiler. "And they're all dealing with this one day at a time, the best they can. There are still nightmares. Some of the schoolchildren are dealing with what we would call, emotional instabilities, and this will go on for several years yet."

Beiler says that over the last generation, Amish have become more open to getting therapy. He and his wife Anne are examples. Thirty years ago, their infant daughter was killed. The Beilers, like many people in the Amish community at that time, kept their grief hidden, even from each other. Only when they started attending counseling several years later, was their marriage saved.

A Commitment to Help Others

Beiler became such a believer in therapy that he set out to be a marriage and family counselor himself.

"Obviously that didn't help put a lot of groceries on the table because I was busy studying and counseling at the same time," he recalls.

To make ends meet, Anne started an Amish food stand at the farmer's market. The hand-rolled, soft pretzels she made were very popular. In fact, they were so popular that the Beilers built a nationwide business selling them. If you've been in an American airport, you probably know Auntie Anne's Pretzels.

This business success allowed Beiler to help popularize counseling among the Amish.

"Tragedy changes you. You can't stay the same," Beiler says. "Where that lands you don't always know. But what I found out in my own experience if you bring what little pieces you have left to God, he somehow helps you make good out of it. And I see that happening in this school shooting as well. One just simple thing that the whole world got to see was this simple message of forgiveness."

Beiler says that because the Amish can express that forgiveness, and because they hold no grudges, they are better able to concentrate on the work of their own healing.