Accessibility links
County Apologizes to Emmett Till Family In the courthouse where the accused murderers of Emmett Till were tried and acquitted more than 50 years ago, Tallahatchie County, Miss., holds a memorial service for him, apologizes to his family, and unveils a historical marker. 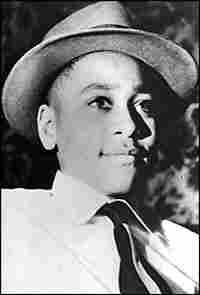 Emmett Till was 14 when he was tortured and killed in 1955. Two white men were acquitted of the crime, though the later confessed in an article published in a national magazine. FBI hide caption

More than 50 years ago, Emmett Till, a black teenager from Chicago, was kidnapped and murdered by two white men in the Mississippi community where he'd been visiting family. The killers were acquitted by an all-white jury at the Tallahatchie County courthouse. And it was at that courthouse on Tuesday that community leaders in the rural town of Sumner apologized to Till's family.

Till's mother, his killers and many of the people involved have long since died. But it is clear that his case still hangs over the community.

The events surrounding the Till case "defined to the world who we are in Tallahatchie County," said local bank president O.T. Sherman.

Till was a 14-year-old black Chicago teenager kidnapped from a relative's home in Money, Miss., in August 1955. He was snatched from his bed, beaten, tortured and killed, allegedly for having whistled at the white shopkeeper's wife in a local grocery store a few days earlier. Federal officials declined his family's pleas to get involved.

After they were acquitted for the murder, Roy Bryant and J.W. Milam, both white, confessed to the killing in an article published in a national magazine. They have long since died — as free men.

Till's cousin, Simeon Wright, 64, was there the night Till was kidnapped. He praised the county's efforts at reconciliation.

"We want to thank you all today for what you are doing here. You are doing what you could. If you could do more, you would," Wright said.

Efforts by the FBI, the Justice Department and the local district attorney this past year to revive the case and bring new prosecutions came up empty-handed.

The probe into the murder of Emmett Till is now officially closed. But the lessons learned from the reinvestigation of his case have inspired authorities to review more than 100 cold case files from the civil rights era.

More on the Emmett Till Case