Accessibility links
Restoring a Campus-Full of Frank Lloyd Wright Florida Southern College is home to the largest collection on a single site of buildings designed by architect Frank Lloyd Wright. But the 12 buildings and covered walkways are crumbling, and the college has embarked on a long and expensive project to save them. 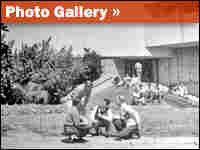 Gallery: Tour the Wright Buildings on the Florida Southern Campus 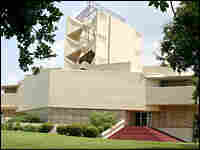 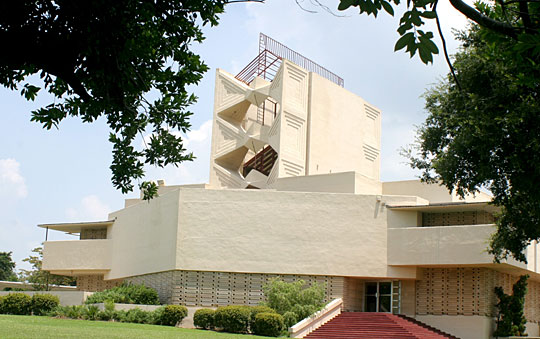 The Annie Pfeiffer Chapel was the first of Frank Lloyd Wright's buildings at Florida Southern College to be constructed. Speaking at the chapel in 1949, Wright said the school "may never be more than a freshwater college," but its architecture will cause it to become "a beacon of light."

Hear Wright Talk About Architecture at Florida Southern in 1950.

Among Florida's many distinctions, here's one you probably didn't know: It's home to the largest collection of buildings designed by acclaimed architect Frank Lloyd Wright on a single site. But time and the Florida elements have not been kind to the 12 Wright buildings, located on the campus of Florida Southern College.

So the college has begun restoration of the buildings, which Wright designed and built over a 20-year period, from the 1930s to the '50s, on its campus in Lakeland.

Even before Wright began work at Florida Southern, its grounds were beautiful. The private Methodist college 35 miles east of Tampa was situated in an orange grove overlooking a picturesque lake.

It also had something more — a president with a vision. In 1938, Dr. Ludd Spivey sent a telegram to America's foremost architect. It read, "Desire conference with you concerning plans for great education temple in Florida."

Wright embraced the challenge and drew up a master plan. He designed a complex of 18 buildings built around a central spectacular fountain and connected by a network of covered walkways called esplanades.

Today, there are still orange trees scattered across the Florida Southern campus. And, once again, the bucolic scene is interrupted by the sound of construction.

Architect Jeff Baker, who specializes in restoring historic buildings, is preparing a plan for the restoration of all of the Wright buildings at Florida Southern, including elements that never really fulfilled Wright's vision.

For example, workers are fixing the basin of a huge fountain that Wright called the "water dome." The fountain, completed in 1948, is a perfect circle, 160 feet across. Around its perimeter are high-pressure water nozzles that will shoot water 45 feet into the air to create a "dome" of water.

The dome effect has never really worked as designed, due to a lack of water pressure. Now, after installing new plumbing and pumps and restoring the fountain, Baker said the fountain will finally operate as Wright envisioned.

"I think it's the largest dome of water anywhere in the world, and it's just going to be mind-blowing," Baker said.

Just next to the water dome is another set of Wright buildings called "the seminar." These buildings, which were completed in 1941, and some others designed by Wright, were largely built by Florida Southern students, many of whom worked as laborers in lieu of tuition.

Because of that sometimes-erratic workmanship — and Wright's brilliant but not always practical design — the buildings have not aged well, Baker said. On one seminar building, many of the three-foot-long cast concrete "textile" blocks are crumbling.

"They're almost nonexistent in many parts," Baker said.

The uniqueness of the Wright collection of buildings at Florida Southern, and their deteriorating state, recently drew the attention of the World Monument Fund. The fund — which monitors important architectural and cultural sites around the world — put the college's Wright buildings on its list of the world's 100 most-endangered sites.

Florida Southern President Anne Kerr hopes the recognition will help the college in its drive to restore the Wright buildings, which is expected to cost about $50 million.

"That's a very big number," she said. "But when you think that the greatest American-born architect's work is here — and that this is an invaluable treasure, not only for our nation but the world — then $50 million comes into better perspective."

Florida Southern has already received grants from the state of Florida and the Getty Foundation. The grants have already allowed the college to restore the 1.5 mile-long walkways, a major component of Wright's design.

According to Baker, the structure is just as impressive as the buildings.

"Frank Lloyd Wright described this campus, at one point, as a series of esplanades that occasionally become buildings," Baker said. "The whole notion was these esplanades would be slicing through the orange groves and eventually, you'd just come upon a building."

In all, 12 structures were built here by the time of Wright's death in 1959. Drawings exist for six additional buildings that were never undertaken.

'Thanks for the Widow's Mite'

Jim Rogers, a professor of art and architecture history at Florida Southern, said that after Wright died and Spivey retired, ill will between Wright's estate and the new college administration over money ended the decades-long building project.

Rogers said the campus was the product of a vision shared by Wright and Spivey. Letters between the two men show that many details, including billing, were handled personally.

Roger describes that in one letter, "Wright is writing back to Spivey, who sent him $500, and says, 'Thanks for the widow's mite.'"

In another letter, Spivey sends $250 to Wright and says, "'You keep demanding money. This is all I could get, and I took this out of the faculty salary pool.'"

In the years after they were completed, Florida Southern made changes to the Wright buildings dictated by the college's needs and the changing times. Air conditioning was added, and the old library was converted into offices. The science building was modernized; now, big ventilation ducts dominate the old roofline.

Baker said Florida Southern has tough decisions ahead about how much of Wright's original vision it can still accommodate. Baker has done similar work on other historic campuses, including The College of William & Mary and the University of Virginia.

Over time, Florida Southern's campus will be seen in the same light as Thomas Jefferson's design for the University of Virginia, Baker said.

"This will be considered one of our most precious sites," Baker said. "Frank Lloyd Wright was a genius who comes around maybe once in 500 years, a mind like that."

College officials say restoring Wright's legacy at Florida Southern could take a decade or more. The college will celebrate the first phase — the premiere of Wright's water dome — on the campus in Lakeland later this month.