ANUCHA BROWNE SANDERS: I guess really the only statement I want to make is what I did here, I did for every working woman in America. And that includes everyone who gets up and goes to work in the morning, everyone that aspires to be in a corporate environment.

MARTIN: That was Anucha Browne Sanders commenting after the jury verdict. The team's owner also was found liable for retaliating against her when she complained and ordered to pay her $11.6 million in punitive damages.

I'm joined now by Georgetown law professor Emma Coleman Jordan to talk about this case. Professor, welcome. Thanks for joining us.

MARTIN: And I think that it would be important to note that you've been studying the issue of sexual harassment for a very long time that you provided counsel to Anita Hill, for example, when she testified to the Senate Judiciary Committee about her experiences with Clarence Thomas during his confirmation hearing, a very emotional, very intense experience.

In contrast to that, how do you feel that this trial unfolded? There was a lot of - it was - obviously, very riveting, particularly if you live in New York. But do you think that the temperature has changed? Do you think the way these issues are discussed has changed since then?

COLEMAN JORDAN: Some things have changed and some have not. One of the things that has changed that was very dramatic in this case was the verdict. We had a jury verdict that was unanimous for liability. And the only question was who was going to pay the punitive damages. And Coach Thomas was not assessed punitive damages because they couldn't come to an agreement but the entity - the Madison Square Garden and the owner - were assessed punitive damages of $11.6 million.

So that's really important because in 1991, when we represented Anita, the question of whether or not this was an offense to use words in an offensive way in the workplace. Anita's case was different in that she didn't allege any touching. This is a case that involved both words and touching.

So what has changed is the climate of understanding that we have a better understanding. And this jury clearly understood that an executive who is vice president for marketing who's a $260,000 employee is not a person - or even if she'd been a secretary really doesn't matter - her status. But the climate in which she worked was one in which she had a reasonable expectation of being free, of being called the B-word and the W-word, we could translate it to the H-word, on a daily basis for being touched, embraced. So there are differences in understanding, and you can take that in the jury verdict.

MARTIN: And I think it is important to note that the law at the time that Anita Hill was summoned before the Senate Judiciary Committee to give her account of her dealings with Thomas, the law was clear then...

MARTIN: ...that this kind of language was not appropriate to the workplace.

COLEMAN JORDAN: Yeah. You know, it's a cultural...

MARTIN: But the law hasn't changed.

COLEMAN JORDAN: Absolutely. It's not the law. It's a cultural understanding. And, you know, when you translate the law into results in the form of a verdict or a popular opinion - in Anita's case, it was the opinion surveys that were done - polls. You could see that the question of whether this was truly actionable was something that people really hadn't understood, and they had to struggle with. So I think the understanding that this is unacceptable - so popular opinion has caught up with the law. But it's...

MARTIN: But it's important to note that I have not yet seen a lot of reaction to this on kind of the blogs and the sports radio programs and so forth. I imagine that that will come. But I do think it's interesting to note that one of the key pieces of testimony that I think a lot of people became aware of is that Isiah Thomas making the distinction between whether a white person used the B-word in connection with a black female, and whether an African-American man used the B-word in connection with an African-American female.

Now, he later tried to clean it up and publicly said, yeah, I don't endorse this. But I do wonder whether that does represent an opinion that's out there, that either there's a racial difference or there really isn't that big of a deal. You know, that the B-word is just not that big of a deal. And if you're going to work in an environment like a sports environment, which is predominantly men, you should be a little thicker-skinned.

COLEMAN JORDAN: Well, there are two pieces of this. One piece is the cultural defense to sexual harassment. That's old. I remember during the time of the hearings, we had a New York Times op-ed from a very distinguished sociologist at Harvard, Orlando Patterson, who used as the core of his argument in that op- ed piece that Anita was just being supersensitive to what he called down-home courting. That this is how black men court black women. And in 1991, we thought that was extremely insensitive because, in our experience, we didn't have this view.

MARTIN: Well, it's also at variance with Mr. Thomas' recollection because his insistence was that he was never trying to date her. So that's at variance with his point of view on the whole situation.

COLEMAN JORDAN: Well, what I wanted to capture really was a distinguished sociologist who did this research. Actually, it turns out it was not based on research, and he since changed his view about this and has written in a very different way about this issue. But the point that I'm making is one thing that is the same in this case is this cultural defense. You're right, according to the transcript and the video of the deposition, Isiah Thomas said it's okay - not so bad for a black man to use the word. So that's one piece of it, which is the sense of entitlement that it's just a sister and that she really ought to be immune to feeling offended by this kind of language, that you ought to expect that a black man is going to talk this way. So that part there or elements of continuity there.

Second element that will be important to think about is the assertion that if you work in an academic setting or if you work in a corporate setting, one set of rules apply, but if you work in Madison Square Garden and in the sports setting or - dare I name a corporation - a distinguished black cable network where, you know, the language barriers are really quite lower and quite different that you ought to - you're coming to the nuisance, so to speak, that you're coming to a place where this discourse is the norm.

And so what we're getting from this verdict is that the jury said, I don't think so. I don't think that a sports arena, that a team should be given a pass on the standards of acceptable address for employees. After all, this is not the bedroom of a private - private bedroom of an executive. We're talking about the workplace. So what's changed now with this verdict is the sense that the second piece of it, which is that locker rooms and the executive suite of sports teams are different places in terms of what we should accept.

MARTIN: And you heard, I think, earlier, the clip that we played from Isiah Thomas, adamantly insisting that he is innocent, that he will clear his name, and both he and the executives of Madison Square Garden are insisting that they will appeal. Realistically, how long does it take for matters like this to be resolved? The other plaintiff was fired in February of 2006, so it's already been - I mean, I don't know whether that's - is that a long time or short amount of time in a case like this? So how long is this likely to go on?

COLEMAN JORDAN: Well, it's gotten to trial on a fairly short period of time from 2006. Now, it's not very long for a full-scale trial. And, you know, there are questions about whether this case ought to be settled for - should have been settled for a smaller amount that the plaintiff was willing to accept earlier. I think the newspapers are reporting about $6 million. But I do think the appeal process can take a lot longer - years - and that can be used as a way of essentially punishing the plaintiff because the chances of succeeding on appeal are probably very low, and the question about pursuing an appeal depends upon your pocketbook. If you're very wealthy and have resources, you can drag out an appeal for a very long time. And ultimately, the decision will be the same at the end of the day.

MARTIN: So this is not an easy thing to do?

MARTIN: This is not an easy road to pursue even if someone feels that he or she has been grievously wronged.

MARTIN: All right. Professor Emma Coleman Jordan is a professor of law at Georgetown University. She was kind enough to join us here at our studios in Washington. Professor, thank you so much for speaking with us.

COLEMAN JORDAN: It's been a pleasure, Michel. 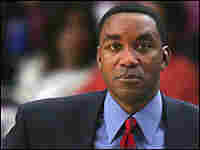 A federal jury has found that a former executive of the New York Knicks was sexually harassed by her bosses, including coach Isiah Thomas. Anucha Browne Sanders will receive $11.6 million dollars in compensatory and punitive damages from Madison Square Garden, her former employer.

Browne Sanders was once the Knicks' vice president of marketing and business operations. She testified that she was repeatedly cursed at and hit on. Thomas denied cursing at Browne Sanders but said he cursed around her. In a deposition, Thomas said that a white man calling a black woman a "bitch" was worse than a black man doing the same. A season ticket holder testified that he saw Thomas put his arm around Browne Sanders and compliment her appearance, causing Sanders to grow uncomfortable.

Thomas was not found liable for punitive damages after the trial, but the jury decided that he had harassed Browne Sanders, herself a former college basketball star.

"I'm innocent, I'm very innocent, and I did not do the things she has accused me in this courtroom of doing," Thomas said after the decision. "I'm extremely disappointed that the jury did not see the facts in this case."

Browne Sanders said hers was a victory for all working women.

The case has reflected rather disastrously on James Dolan, the billionaire CEO of Cablevision, which owns the Knicks. In a videotaped deposition that was played at the trial, Dolan sat slumped in a chair wearing a black crewneck shirt with the sleeves pushed up. His demeanor and answers may have seemed flippant to the jurors.

Laughing off this case may have been Madison Square Garden's undoing. Cablevision is valued by the stock market to be worth more than $10 billion. When Browne Sanders left the Garden, she offered to drop her suit for $6 million. She was rebuffed.

The Knicks haven't had a winning record in seven years, but the loss they suffered Tuesday can't be undone with draft picks or clever trades, though the Garden does vow to appeal.