Accessibility links
FDA to Weigh In on New Label for Cough Medicines A petition before the Food and Drug Administration could change the way parents care for children with colds. Many pediatricians cite a lack of evidence that cough medicines are safe or effective for young people.

Listen
FDA to Weigh In on New Label for Cough Medicines 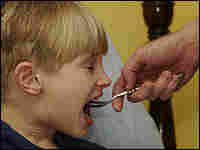 A lot of parents continue to use cough and cold medicines, even though many pediatricians say these medicines should not be given to children. iStockphoto.com hide caption

There are ways to treat a child's cold without cough medicine.

A petition before the Food and Drug Administration could change the way parents are advised to use cold and cough medicines. The issue is not new. Back in 1997, the American Academy of Pediatrics issued its first policy statement on cough medicines. The nation's leading group of pediatricians said that cough medicines should not be given to children because there is a lack of evidence demonstrating their safety and effectiveness.

The issue gained traction earlier this year when Baltimore's Commissioner of Health sent a petition to the Food and Drug Administration asking for a new warning label for over-the-counter anti-tussives, expectorants, nasal decongestants, antihistamines and combination cough-and-cold products. The petition was signed by a prominent group of Baltimore pediatricians, and it asks for a strongly worded statement telling parents that the products should not be used for treatment of cough and cold in children under 6 years of age.

A lot of parents continue to use cough and cold medicines, which are a $2 billion-a-year industry. Mother Robin Wilner of the Washington, D.C., area says she turns to cough syrups in the evenings when her children are sick. "It certainly helps them getting to sleep," Wilner says.

Research, however, suggests the benefits that parents perceive is really nothing more than the placebo effect.

When cold and cough medicines were approved for over-the-counter use in children back in the 1970s, manufacturers were not required to conduct studies to document their safety or their effectiveness.

This left Dr. Paul wondering about their effects, especially because he was constantly having to advise parents on using them. So, he and a group of colleagues conducted their own, small study. They recruited the parents of 100 sick children and had them administer a single, bedtime dose of medicine. Some children got the real thing, a combination of dextromethorphan, a standard cough suppressant, along with the antihistamine Benadryl. Other children, unbeknownst to them and their parents, were given a placebo syrup.

"Parents found there was no difference between the two medicines or the placebo in how much their child coughed or how well they slept," Paul says.

Discouraging the Use of Cough and Cold Medicines

Paul advises all of his patients not to use cough and cold medicines. In addition to his research, which was published in the journal Pediatrics in 2004, there has been more research showing that neither decongestants nor antihistamines are effective in treating kids' cold-related symptoms.

When parents insist upon using cold and cough medications for their children, Paul tries to offer advice. "I go through how to read the labels closely, how to follow the dosing instruction," Paul says. He advises parents to never use the medicines in children younger than 2, because there are no dosing instructions.

Each year, about three children die from unintentional overdose of cold and cough medicines. In 2005, accidental misdosings led to more than 100,000 calls to U.S. Poison Centers.

Baltimore City Health Commissioner Joshua Sharfstein, a pediatrician by training, says it's easy to get confused about how much medicine a child has taken.

"Sometimes the parent and the grandparent are both giving doses, or the mom and dad," Sharfstein says. And sometimes parents give two combination products, and Shafstein says they don't realize they're doubling up on the same ingredient.

Sharfstein says these risks of overdosing should not be tolerated, because there is evidence showing that cold and cough medicines don't help kids feel better.

"There's no proven benefit," Sharfstein says, so kids under 6 shouldn't be taking them at all.

The first step toward any policy action will come Oct. 18 when a group of advisers to the FDA meet to discuss the petition.

Doctors Ian Paul of Penn State and Danny Benjamin of Duke University say there are ways to treat a cold without using medicine.

Here are their recommendations for simple steps that may help, and surely won't hurt, a sick child:

- Always encourage a child by telling him or her that colds are usually short-lived, and that they will feel better in a few days.

- Saline nose drops or warm steam from a shower can help ease decongestion. Of decongestants and cough medicines on the market, Benjamin says, "There is not anything out there that is effective."

- If the child is not getting better or is getting worse, reevaluate his or her condition.

- Both doctors emphasize the importance of reassuring the child by providing affection, comfort, and understanding. Benjamin says, "In our household we use a lot of tender loving care."