Accessibility links
Rilo Kiley and the Joy of Liberation For a band prone to sad confessionals, Rilo Kiley sounds downright gleeful on "Breakin' Up." Granted, it's a kiss-off song that practically fetishizes rationalization. But there's something uplifting about hearing singer Jenny Lewis "wash the blues away," for once.

Rilo Kiley and the Joy of Liberation

Rilo Kiley and the Joy of Liberation 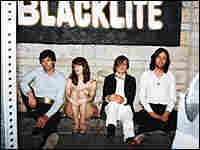 If there's a unifying thread in Jenny Lewis' assorted projects — leading Rilo Kiley, singing in The Postal Service, breaking out as a solo singer last year — it's the way she wears her emotions with a kind of fearless vulnerability. Even on a brash, nervy rock song like 2004's "Portions for Foxes," in which she snarls about being "bad news," Lewis finds room for a heartbreaking confessional: "I know I'm alone if I'm with or without you / but just being around you offers me another form of release."

Under the Blacklight has divided Rilo Kiley's longtime fans, many of whom lament its reliance on slinky pop ringers. But what really marks the album as a departure is the comparative sunniness of Lewis' mood on key tracks. For all the sonic shocks in "Breakin' Up" — a spangly dance-pop number that hits every disco signifier short of a Vocoder — it's hardest to fathom its tone of almost unhinged celebration. When Lewis coos, "Ooh, it feels good to be free," the effect feels almost comically jarring. (Maybe it's the cowbell.)

Naturally, Lewis lets a hint of darkness slip into the corners of "Breakin' Up" — it is, after all, a kiss-off song that practically fetishizes rationalization. ("Here's to all the pretty words we will never speak / Here's to all the pretty girls you're gonna meet.") But there's something oddly uplifting about hearing a perpetually sad singer "wash the blues away," for once. It's appropriate that, in light of the subject matter, Lewis sounds liberated in every sense of the word.