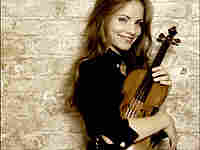 At 24, Julia Fischer has captured the prestigious Artist of the Year award from Classic FM Gramophone in Europe. hide caption

The young violinist talks about her career.

German violinist Julia Fischer was named Artist of the Year at the 2007 Classic FM Gramophone Awards ceremony, held Wednesday at London's Dorchester Hotel. The awards are considered among the most important worldwide for classical musicians. (See below for a complete list of winners.)

At 24, Fischer has already been hailed as "one of the great violinists of the 21st century," and last year the BBC Music Magazine gave her the Best Newcomer award.

At the awards ceremony, Fischer said she was happy to have been recognized by her fans, especially in England.

"I am very happy to receive this award, especially in the U.K., where I began my career by winning my first competition when I was 11 years old," Fischer said. "I deeply appreciate the belief of everyone who voted for me."

Indeed, many people did vote for Fischer. The awards are based on listener votes from 15 classical radio networks in 13 countries, with a combined audience reported at near 14 million people. This type of voting procedure marks a departure from the Gramophone Awards in years past, which relied solely on Gramophone Magazine critics.

Fischer began playing both the violin and the piano at age 3, taking lessons from her mother. Her first love was for the piano, but since her mother felt there were already too many keyboardists in the family, she encouraged her daughter to take up the violin.

Fischer says her dreams of becoming a musician began to solidify at age 6, when she saw the acclaimed violinist Anne-Sophie Mutter on television.

Now Fischer, like her idol Mutter, makes her living playing violin with the world's great orchestras and in recital. The Bach performance heard here finds Fischer in concert at Union College in Schenectady, N.Y.

Thanks to NPR member station WMHT, in Schenectady.

Artist of the Year

Label of the Year

Gramophone and New York-based radio station 96.3 WQXR-FM honor Gustavo Dudamel and the Simón Bolívar Youth Orchestra of Venezuela with the second annual WQXR Gramophone Special Recognition Award. Dudamel and his orchestra were chosen for their outstanding contribution to the world of classical music and the example they give of what music can do to transform people's lives.

Record of the Year (and winner of the Concerto category)