Accessibility links
Biden's Road to Senate Took Tragic Turn Joe Biden was just 29 when, in 1972, he was elected as a senator from Delaware in an astounding upset. But his triumph turned to tragedy a few weeks later, when his wife and daughter were killed in a car accident. 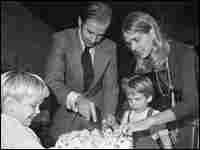 Joseph Biden celebrates his 30th birthday at a party in Wilmington, shortly after he was elected as senator from Delaware. He's pictured with his first wife, Neilia, and their sons, Beau (foreground) and Hunter. Shortly after, Neilia and his daughter, Amy, were killed in a car crash. Bettmann/Corbis hide caption 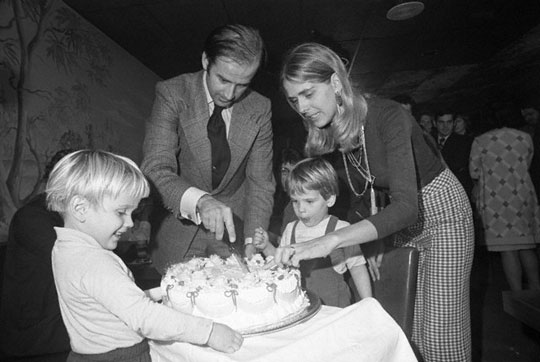 Joseph Biden celebrates his 30th birthday at a party in Wilmington, shortly after he was elected as senator from Delaware. He's pictured with his first wife, Neilia, and their sons, Beau (foreground) and Hunter. Shortly after, Neilia and his daughter, Amy, were killed in a car crash.

Biden’s 1972 Senate campaign had little cash to pay for ads. Its few radio ads consisted mostly of a staffer recording comments from voters with a simple microphone.

Hear a Campaign Ad Recorded at a Shopping Mall 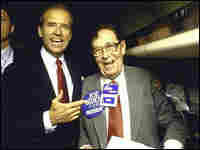 Biden talks to a supporter on a train after announcing his candidacy for the Democratic presidential nomination in 1987. Biden dropped out of the race in September 1987. Cynthia Johnson/Time Life Pictures/Getty Images hide caption

Read a Profile of Biden

Read about Joe Biden's political career and his prospects as a presidential candidate.

From the very beginning, it was a family affair, says Valerie Biden Owens, Joe Biden's sister — who was then, as now, her big brother's campaign manager.

"I was the campaign manager because I was the only one who took him seriously," Owens said. "My mom was the coffee chairman, my brother Jimmy Biden was the finance chair, my brother Frankie Biden was the volunteer coordinator. Everyone thought my dad was the candidate, because he was very distinguished looking," she recalls.

Back in 1972, Joe Biden lacked the senatorial stature he has now, but he made up for it in energy and ambition. He was a member of the New Castle, Del., county council when he decided to take on Boggs — a Delaware institution who had served in the Senate, the House and as governor.

Ted Kaufman worked for the DuPont Co. and was active in Democratic politics when Biden asked him to help out his campaign.

"I said I would, but I said, 'Joe, I've got to be honest with you; I really don't think you have much of a chance to win this race,' " Kaufman recalls.

But Kauffman says Biden convinced him.

"His basic theory was Sen. Boggs was beloved, but these were changing times. People were looking for answers to some of these big questions," Kauffman says. "The way he used to express it [is]: 'If Sen. Boggs and I could just go down to the football stadium at the University of Delaware and people saw the two of us, they'd pick me.' "

Kaufman says that was "pretty much the essence" of how Biden won.

In 1972, the Vietnam War was raging, and Biden said it was time for the U.S. to withdraw. He talked about the environment and civil rights and about change.

Cash-Strapped But 'On Fire'

The campaign had no money to speak of. It relied on position papers on newsprint and a few radio ads. Valerie Biden Owens fondly remembers, "Our radio ad was a guy on our staff with a portable tape recorder, putting the microphone in the face of our mailman." At one point, the ads included "an anonymous person at the mall."

But the main way Biden's message got out was through position papers that the campaign hand-delivered. John Marttila, one of Biden's few paid consultants in 1972, says Biden won because he had "the hardest-working campaign I've ever been part of. There were thousands of people distributing material every single weekend." Marttila says the campaign "was just on fire for the last month."

Valerie Biden Owens calls that first campaign a children's crusade because of its many youthful volunteers.

"Neilia, Joe's late wife, taught school and I taught high school, and these kids got up on weekends at 6 o'clock, and we hand-delivered these newspapers six weeks in a row."

On Election Day, as Republican President Nixon carried Delaware in a landslide, Democrat Joe Biden beat Boggs by 3,162 votes — by all accounts, an improbable upset. Kaufman remembers what he felt at the victory party that night.

"I can remember the thought as if it was yesterday," he says. "I will never again think of something as impossible."

But the joy Biden and his family and friends felt that night was short lived.

Weeks later, his wife Neilia and his infant daughter were killed in a car crash. Biden thought about resigning the seat he had just won. Instead, he resolved to return home to Delaware after each night's Senate session to spend time with his sons — a two-hour commute he conducts to this day.

The energy and ambition that Biden had in surplus as a 29-year-old also remain as, at age 64, he campaigns in the backyards of Iowa, in his second run for president, as the candidate of experience.