Accessibility links
Teen's Female Performances Draw Him a Crowd Whether he plays a man or a woman, Taichi Saotome draws fans from all over Japan to his theater for the masses performances. 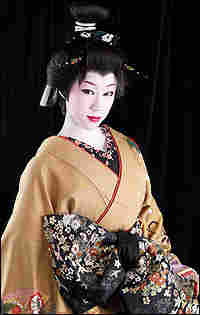 Taichi Saotome, the 16-year-old star of Japan's Taishu Engeki, or theater for the masses, has drawn enthusiastic audiences to see him perform dressed as a man and women in traditional geisha costumes. Courtesy of Saito Entertainment Inc. hide caption 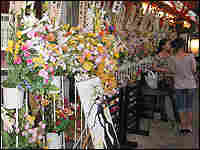 Taichi Saotome is a young Japanese actor who performs a sort of Japanese vaudeville known as "theater for the masses." He plays women's roles — and he has both men and women in the audience swooning over his charms.

He's only 16 years old, and already he has almost a dozen years of acting experience.

Theater for the Masses

People pack the house at the Great Victory Theater in Tokyo's Asakusa district. They're there to watch Taishu Engeki or theater for the masses — a distant cousin of the better-known and more formal Kabuki Theater.

Taishu Engeki is to Tokyo's old Asakusa entertainment district as musicals are to Broadway.

But in Tokyo, tickets are cheap enough for many locals to come several times a week. The theater has a low stage, and one wing juts out into the audience. The audience sits on legless chairs on the floor, snacking on rice crackers and dried squid. It looks like they're watching TV in their own living room.

The show begins with a play. The star, Taichi Saotome, plays the role of a young outlaw samurai. He's on the run from his old posse, and he's searching for his parents from whom he was separated during childhood.

He finds his mother and convinces her that he's her long-lost son.

But he eventually leaves her sobbing. He has to go and face his outlaw past in a sword fighting showdown.

It's a soap opera plot that leaves many of the middle-aged women in the audience in tears.

After the play, there's a comedy routine. Then the troupe hawks Saotome T-shirts, fans and other merchandise. And in the meantime, Saotome puts on his female geisha outfit and prepares for the dance numbers.

Saotome began his acting career at four years old. He and his parents are part of a troupe, composed of around a dozen performers. Like most Taishu Engeki troupes, they spend much of the year on the road, performing at theaters, bathhouses and spas.

"Simply put, he's a genius," Fujioka says. "There are plenty of good dancers, but Taichi attracts people just by standing there. He has this incredible aura."

Speaking before the show, Saotome seemed unsure of why his female characters have such appeal to audiences.

"Why? ... Why," Saotome asks. "I'm not really sure why. But I do think it's a good thing that people of all ages like to watch my performances."

But Saotome says he's eager to expand into new roles.

A 70-year-old Mrs. Mizukoshi, an Asakusa resident who gives only her last name, sits near the stage. She snacks on rice balls, and she says she has watched Saotome's stage skills improve over the years.

"You must notice that he has great sex appeal for a 15 year old," Mizukoshi says. "The way he moves and walks — it's all so graceful. I've learned a lot from him about dancing."

Suddenly, blue and red lights flash, a dry-ice fog billows up and a blizzard of confetti flutters down. Saotome flits and twirls across the stage in white makeup and an elaborate hairdo.

The music comes in all styles. It's campy; it's schmaltzy; it's way over the top. One minute he's a he, and the next minute he's a she. In any language and in either gender, Saotome is a consummate showman. The audience is enthralled and entertained out of their socks.

The theater managers thank members of the audience as they exit onto the street, giddy after 3 1/2 hours of sensory overload. Outside, an elderly woman in white, who identifies herself as Mrs. Okada, appears to be in a blissful trance.

"Saotome seems like more than a human being. He's like a goddess," says Mrs. Okada. "Every time I come to see his performances, I feel purified. I come out of the theater feeling lighter."

Her wallet is a bit lighter too — after giving Saotome a gift worth the equivalent of about $6,000. Members of the audience stuff cash in Saotome's kimono and give gifts of flowers, food and drinks.

Saotome comes out of the theater and is surrounded by his adoring fans. This is his last show before the theater closes down for renovation, which includes adding chairs with legs to the new theater. Recently turned 16 years old, Saotome's moving on to do more screen roles.

Audiences will remember this time as a turning point for a rising star. It's a rare moment in this age of TV and the Internet when theater creates such an intimate bond between actors and audiences. But Saotome says he's committed to continuing Taishu Engeki performances, at least part of the time.

And to add to his repertoire, he's learning tap dancing.