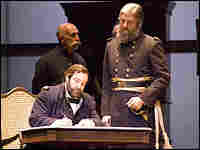 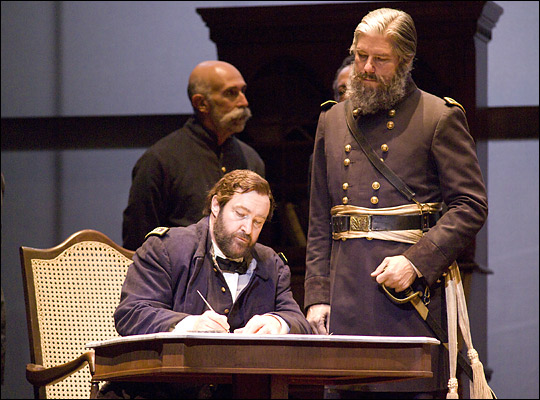 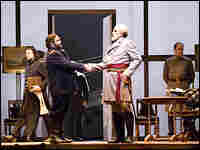 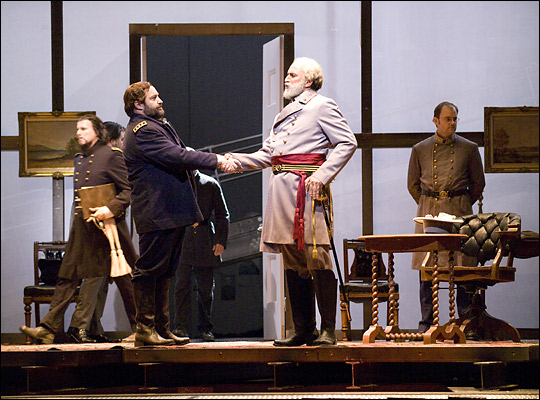 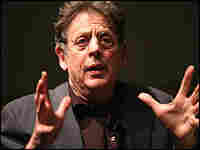 Hear commentary from Dennis Russell Davies, the conductor of 'Appomattox.'

The language of Glass

Words of the Civil War

Philip Glass is among the most prolific and influential modern composers. He's written symphonies, trios, a few dozen film scores and more than 20 operas, and he shows no sign of slowing down this year, now that he's 70.

This month, San Francisco audiences are enjoying a festival of Glass works, including the world premiere of his newest Opera, Appomattox. It's about the Civil War and the leaders who brought that bitter and bloody struggle to an end.

Staging History in the Opera House

Glass has composed a trilogy of operas about great men of the past: Einstein, Gandhi and the Egyptian pharaoh Akhnaten. Glass can call it a quartet now that he's written Appomattox, featuring Ulysses S. Grant, Robert E. Lee and Abraham Lincoln.

I began thinking about leaders of that character," Glass says. "Of tremendous moral dimension and moral stamina and principles, the likes of which we do not see in public life today. And I mean not just in the United States, but worldwide. That statesmanship is hard to find."

At one point in the new work, Lincoln speaks to Grant, laying out themes that dominate the opera: "Why must we end the war with senseless slaughter? How will we ever reunite our people?"

Glass embraces the idea that an artist's work is always autobiographical. He grew up in Baltimore, a segregated city, so Appomattox, he says, is also about race and its role in current events.

"In fact, the war never ended," Glass says. "We're talking about a conflict of culture, a conflict of history, and it was not going to be signed away in one afternoon."

Toward its end, the opera jumps forward through time, from the peace Lee and Grant forged at Appomattox Courthouse to the civil-rights struggles of the 1960s.

Glass also shapes the opera, he says, around his experience as a boy during WWII.

"I had lived in a home in which every adult male was in the army—every one," Glass recalls. "This was a Jewish family, and the Jewish community in Baltimore knew what was happening in Germany. And so my memories of the Second World War are the memories of the anxiety and fear that the women experienced."

Over the years, Glass has developed a loyal team of artistic collaborators, including Christopher Hampton, who wrote the libretto for Appomattox. Hampton worked to distill the letters and memoirs of Grant and Lee, their wives and their aides, turning their words into a kind of free verse without changing any of the ideas.

Some music needed little polishing, such as a song Davies suggested to Glass, "Tenting on the Old Campground." It's familiar to many summer campers, and was popular among Civil War soldiers on both sides of the battle line. "Tenting" seems to celebrate the fellowship and romance of war. But the full lyric carries a more somber message. Davies characterizes it as a "terribly moving, very expressive and incredibly sad song."

Glass arranges "Tenting" so that it seems of a piece with his own music. At other times in Appomattox, he takes traditional material and writes something new, as in his setting of Psalm 47, sung by slaves freed after the Union Army seized Richmond, Va.

One thing no one should expect from Glass is that Appomattox will mark the closing of his career. At 70, Glass is raising two young children in New York with his fourth wife, and he's writing new music at a fast clip—music for two plays, a new opera based on the life of Kepler, symphonies number 9 and 10.

Glass says he's flattered by the fuss over his birthday, but it also makes him a bit wary.

"I remember when John Cage was turning 79," Glass recalls. "And he dreaded his 80th year. I remember that because I knew him at the time. Well, he never quite lived to be 80. He died before his birthday, and I don't doubt that maybe he was just ducking out of all the parties."

Glass will be in San Francisco for a lot of parties and lectures in the next few days. Among other events, he's speaking at Stanford University to introduce The Book of Longing, a new song cycle he's written for the poems of Leonard Cohen. Later this month, Glass will be in London and the Netherlands for two more festivals of his work.