Accessibility links
Paul Has Long Drawn Support from Unlikely Places GOP presidential candidate Ron Paul has become an unlikely Internet celebrity. But it's not the first time Paul has run with an unusual source of grass-roots support: In 1976, he won a House race thanks, in part, to the moms whose babies he'd delivered. 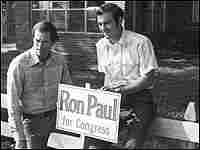 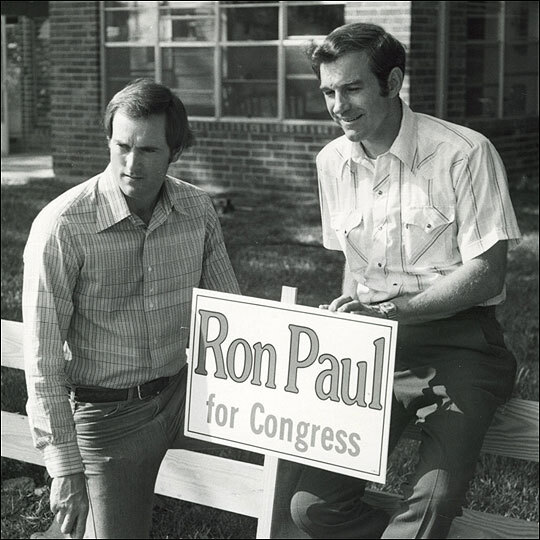 Ron Paul holds a campaign sign during his 1976 run for Congress. 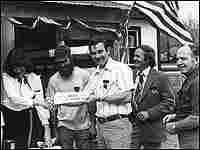 Paul, seen third from left, was a practicing obstetrician in his Texas county, and he had a close relationship with local voters. Courtesy of Ron Paul hide caption 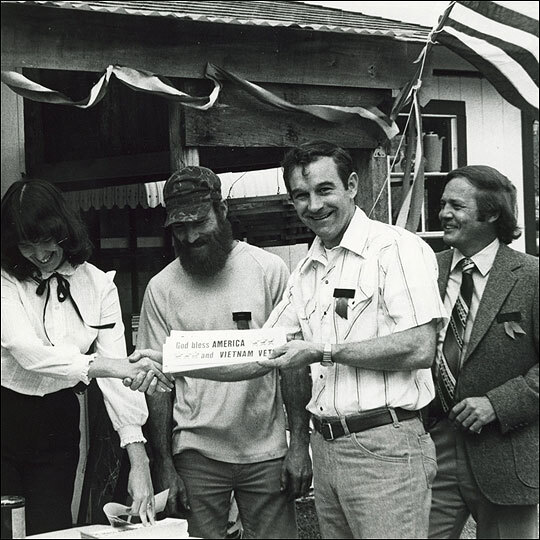 Paul, seen third from left, was a practicing obstetrician in his Texas county, and he had a close relationship with local voters.

Read a Profile of Paul

Read about Ron Paul's political career and his prospects as a presidential candidate.

For tens of thousands of U.S. voters, Ron Paul is one of America's unique political heroes.

The obstetrician-turned- congressman from southeast Texas has become an unlikely celebrity in the 2008 presidential campaign. He strongly opposes the war in Iraq — an unusual position for a Republican — and he has become an Internet phenomenon, with thousands of followers in the blogosphere.

In the past three months, Paul's campaign raised $5 million — on par with Sen. John McCain's (R-AZ) fundraising last quarter. His newfound celebrity is not what one would have expected three decades ago, when Paul first won a seat in Congress. But while the celebrity may have changed, the philosophy has not.

"He was always pretty consistent. I used to say it doesn't make any difference what the issue is, someway or another, Ron will always get it back to the Gold Standard," says Bob Gammage, referring to Paul's stance against government-issued paper currency not backed by gold – a hallmark of Paul's economic philosophy.

Gammage ran against Paul in 1976, in a special election to fill the House seat of Bob Casey, a Democrat who resigned in the middle of his term to become a Maritime commissioner. Gammage thought he would hold the seat for the Democrats.

At the time, the country was coming out of the Watergate scandal. President Nixon had resigned, and Democrats were looking to make big gains in Congress. But the Paul campaign took them by surprise, Gammage says.

"A lot of people did not take him seriously," Gammage says. "He snuck up on them."

Gammage himself learned the hard way not to underestimate Paul, an obstetrician from Brazoria County.

On the morning of the runoff election, Gammage got an early dose of a tactic that, 30 years later, would become known as "swift boating." Gammage says he was jolted out of bed by a radio ad from the Paul campaign that featured a blood-curdling scream.

"The next thing I heard was this sweet girl's little voice saying, 'I hope my daddy and mommy don't vote for Bob Gammage, 'cause he wants to turn the rapists and murders loose to attack us in our beds. I hope my mommy and daddy vote for Ron Paul. He wants to put them in jail where they belong,'" Gammage recalls with a laugh.

It wasn't just the radio ads that gave Gammage fits, but also Paul's intimate relationship to so many voters in a sizable chunk of the congressional district. Especially the mothers.

"I had real difficulty down in Brazoria County, where he practiced, because he'd delivered half the babies in the county," Gammage says. "There were only two obstetricians in the county, and the other one was his partner."

Paul won the House seat, though he was defeated a few months afterward in the general election. He won back the seat two years later. Throughout his on-again, off-again career in Congress, Paul's core beliefs have stayed with him: namely, a libertarian ideal of limited government.

A descendant of German immigrants, Paul grew up in Green Tree, Pa. His father ran a small dairy company. Paul adopted his economic theories in the 1960s from the Austrian School of economic thought, which argued that expanding the money supply — printing paper money not backed by gold — eventually ruins economies.

Paul decided to run for office because he thought that this economic "message should be heard," he says. "I thought, well, I'll just let the chips fall where they may. And, of course, it's led me to a much longer political career than I had ever anticipated."

It's also led to stronger support for Paul's presidential candidacy than many political observers had anticipated. At a recent campaign stop in Manchester N.H., supporters came from all over New England to cheer on their man. To his small but growing band of believers, his integrity has made him a modern political hero.

"Some people have labeled this a revolution, and I would say this is a grand day for a revolution!" Paul said over a growing chorus of "Ron Paul! Ron Paul!"