Accessibility links
Opening Doors and Hearts at the Plaza Hotel The Plaza first opened its doors at the foot of Central Park 100 years ago this week. For 45 of those years, doorman Ed Trinka has greeted hotel guests and passers-by with a smile and a "Good morning!"

Listen
Opening Doors and Hearts at the Plaza Hotel 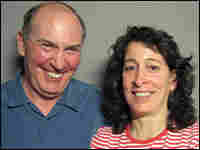 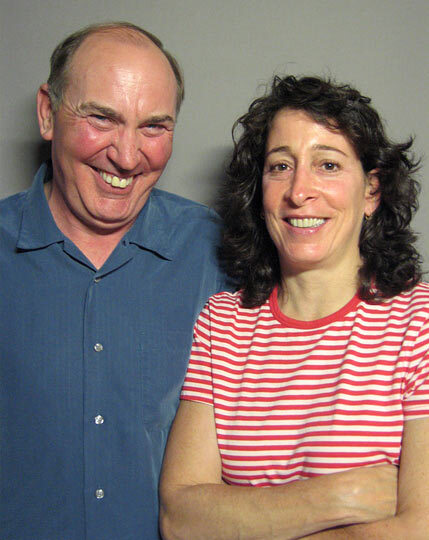 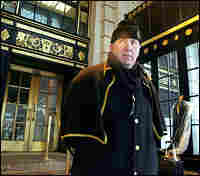 Ed Trinka, on duty as a doorman of the Plaza Hotel. Neville Elder/Corbis hide caption 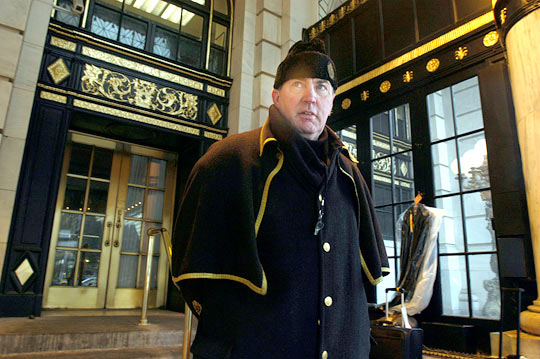 Ed Trinka, on duty as a doorman of the Plaza Hotel.

The Plaza Hotel first opened its doors at the foot of Central Park 100 years ago this week. For 45 of those years, Plaza doorman Ed Trinka has greeted hotel guests and passers-by.

That's how Debra Goodman met him. They struck up a friendship, and she brought him to StoryCorps to talk about working at one of New York's iconic landmarks for nearly half a century.

When Trinka graduated from high school, his father, who was a garage manager at the hotel, told him, "There's a nice job for you over there. Just go over and talk to somebody."

Trinka remembers getting his first day at work. "One of the doormen was sick and they put the hat and coat on me, which fit very well. And they put me on the door right away. I got outside and started working. That was my first job and it was great."

The job had its rewards. Only some of them were financial.

"I always tell a story about Jackie Gleason. For Christmastime, he says to me, 'What was the biggest tip you ever got?'"

The famous comedian handed the doorman $150 and wished him a merry Christmas.

"By the way, who was the one that gave you the hundred?" Gleason asked.

"That was you last year," Trinka said.

Trinka is always ready with a smile and a "Good morning!" for passers-by.

"That's what it's all about, being in front there and smiling and just making everybody happy. That's the whole thing of it."

"You know, anybody that comes in there is a VIP. And when they tell me, 'Treat them like a VIP,' I say, 'I already do.'"

A guest came in one day at 6:30 a.m. looking for a place to get his shoes shined before an important meeting.

The hotel barber shop, where shoes were shined, wouldn't open until 8 a.m. So Trinka took the man's shoes, ran to his locker and grabbed his shoe-shine kit. A few minutes later, he delivered a shiny pair of shoes to the grateful guest.

"He's one of my best friends," Trinka says. "Matter of fact, he comes back to the Plaza all the time."

"You know, my father told me years ago ... 'Be such a man and live such a life that if everybody lived a life like yours, this would be God's paradise.' And I go by that."

Produced for Morning Edition by Katie Simon and Michael Garofalo.