Accessibility links
Marion Jones Admits Using Steroids Olympic champion sprinter Marion Jones has admitted using steroids in preparation for the 2000 Sydney Games and plans to plead guilty on Friday to lying about her drug use.

Olympic champion sprinter Marion Jones has admitted using steroids in preparation for the 2000 Sydney Games and plans to plead guilty on Friday to lying about her drug use.

Jones made the admission in a letter she sent to close family and friends. 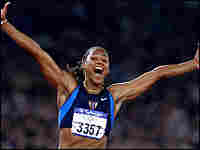 Marion Jones crosses the finish line to win the gold medal at the Olympics in Sydney, Australia, on Sept. 23, 2000. Jones admitted she used steroids before the games in a recent letter to family and friends, The Washington Post reported Thursday. Kevin Frayer/AP/The Canadian Press hide caption 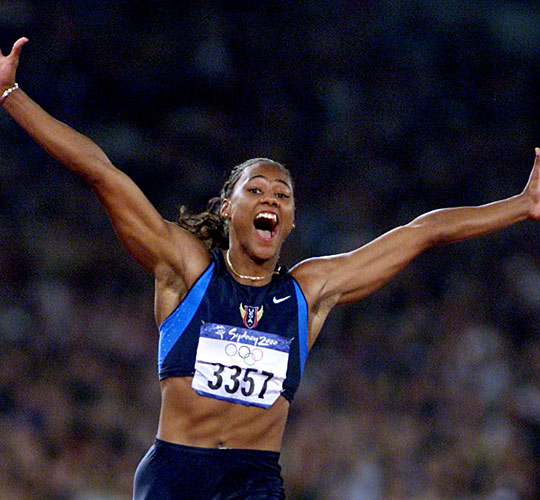 Marion Jones crosses the finish line to win the gold medal at the Olympics in Sydney, Australia, on Sept. 23, 2000. Jones admitted she used steroids before the games in a recent letter to family and friends, The Washington Post reported Thursday.

A 1995 Interview with Jones

Robert Siegel interviewed Marion Jones on All Things Considered in 1995.

Jones: 'I've known sprinters who have been faster than me'

In Depth: Cheating in Sports

Tilting the Level Playing Field? It's Nothing New

The U.S. Olympic Team once dubbed Marion Jones "the world's fastest mom," but she could not run fast enough to escape the doping charges that have plagued her since she won five medals at the 2000 Olympics.

The three-time gold medal winner has now pleaded guilty Friday to charges connected to steroid use in a federal court in White Plains, N.Y. — after persistently denying that she ever used performance-enhancing drugs.

Jones acknowledged using steroids before the 2000 Olympic games in Sydney, Australia, in a letter to her family and friends, according to a story in The Washington Post.

"I want to apologize for all of this. I am sorry for disappointing you all in so many ways," the Post reported Jones said in the letter.

Early Success on the Track

It is an unexpected turn in the career of the Los Angeles, Calif., native, who has been a track and field star since high school in the early 1990s. Jones won the California state championship as a sprinter four years in a row, representing Rio Mesa and Thousand Oaks high schools.

After high school, she played basketball for the University of North Carolina. She was as much of a stand-out on the basketball court as she was in track and field, walking away with a NCAA title in her freshman season and a game average of 17.1 points in her sophomore year.

But Jones' passion was sprinting, and before the beginning of her junior year, she decided to leave the Tar Heels to concentrate on track and field. Four months later, Jones won the 100-meter at the 1997 World Championships in Athens, sprinting her way to victory in just 10.83 seconds.

Two years later, Jones won the gold medal in the 100-meter and the bronze medal in the long jump at the 1999 World Championship.

Her crowning athletic achievement was at the 2000 Olympics in Sydney, where she won three gold medals and two bronze medals.

But Jones passed another milestone three years later. On June 28, 2003, she and her then-boyfriend, Olympic sprinter Tim Montgomery, gave birth to a son.

The pregnancy and child birth did not slow her down. Jones said she worked out on the treadmill up until two days before she gave birth and was back in her running shoes by October.

Less than a year after her first child was born, Jones took the 100-meter Home Depot Invitational in Los Angeles – winning it in 10.99 seconds.

Jones, who turns 32 next week, is married to Olympic sprinter Obadele Thompson of Barbados. The couple live in Austin, Texas.

The content of Jones' letter was a stunning admission for an athlete who has been unequivocal in her denial that she cheated her way to Olympic stardom.

She went on the offensive in 2004, launching a high-profile public relations campaign when the U.S. Anti-Doping Agency began investigating her.

She also filed a $25 million lawsuit against the owner of BALCO, the Bay Area Laboratory Co-operative, who admitted during a grand jury probe that he provided Jones with steroids. That case was later settled.

In the end, Jones and several of her colleagues were among those ensnared in the federal investigation of BALCO.

When a federal grand jury in San Francisco began to hear testimony in 2004, more allegations against Jones surfaced.

BALCO founder Victor Conte maintained he had seen Jones inject herself with steroids, as did her ex-husband.

But in the letter to her family and friends, Jones maintained that she did not know she had used the banned drugs until she stopped training with coach Trevor Graham at the end of 2002.

Jones said she lied to federal agents in 2003 because she panicked when they showed her a sample of a banned substance called "the clear" and realized it was what Graham had given her.

However, a 2004 report in the San Francisco Chronicle said that Jones' ex-husband, shot putting champion C.J. Hunter, admitted he used steroids and told a grand jury that Jones did, too.

Montgomery also testified before the BALCO grand jury and was given a two-year ban from track and field competitions for doping in 2005.

Graham was indicted in the BALCO case last year. He pleaded not guilty to three counts of lying to federal agents and is scheduled for trial Nov. 26.