Accessibility links
Fuels of the Future: How Far Down the Road? Corn-based ethanol, biodiesel, cellulosic ethanol — they're all ways to try to reduce our dependence on oil. But how close are we to growing enough fuel to make a difference? Guests discuss the future of alternative energy and biofuels.

Listen
Fuels of the Future: How Far Down the Road?

Corn-based ethanol, biodiesel, cellulosic ethanol — they're all ways to try to reduce our dependence on oil. But how close are we to growing enough fuel to make a difference? Guests discuss the future of alternative energy and biofuels.

Dan Kammen, co-director, Berkeley Institute of the Environment; professor, Energy and Resources Group at the University of California, Berkeley

Evan Ratliff, journalist; author of "One Molecule Could Cure Our Addiction to Oil," published in Wired Magazine

FAQ: Why Ethanol Stations Are Hard to Find 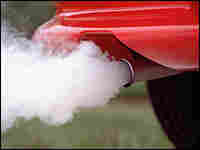 President Bush has seen into our energy future and named it ethanol. In his State of the Union speech last month, he called for alternative fuels to make up 20 percent of the U.S. fuel supply by 2017, and asked for $1.6 billion in a farm bill request to support alternative-fuel research. The fuel that currently shows the most potential is ethanol, which is mostly made from corn in the United States. Here, a look at what someday soon you may be asking for when you say at the pump, "Fill 'er up."

What's the benefit of ethanol over gasoline?

There's a lot of debate on this point. From all quarters of the United States, there's an increasing call to reduce dependence on fossil fuels. When burned, carbon-based fuels such as oil and coal release air pollutants, including the notorious greenhouse gases. Moreover, President Bush has made it a mandate to reduce America's reliance on foreign countries for its energy supply. One way to cut down on oil is to turn to alternative fuels, such as ethanol.

A 2007 Congressional Research Service report says ethanol may slightly reduce greenhouse gases as an alternative to gasoline. But ethanol is a cleaner-burning fuel, but emissions released in the production of ethanol — manufacturing fertilizer for the corn and powering farm equipment and distilleries — have to be factored into the equation.

The CRS says ethanol does have that potential – by replacing gas in vehicles and in part because right now a lot of ethanol production is powered by natural gas or electricity from coal-fired power plants.

How much ethanol is currently being used?

Right now, about 5 billion gallons of ethanol was pumped into vehicles in 2006, a threefold increase since the turn of the century. But it's also a drop in the bucket compared with the amount of gasoline used — about 140 billion gallons in 2006. And only 1 percent of the ethanol used is the E85 blend — 85 percent ethanol, 15 percent gasoline. The other 99 percent contains only 10 percent ethanol, which offers significantly fewer environmental and energy benefits.

How many cars on the road can use ethanol?

The National Ethanol Vehicle Coalition estimates 6 million cars capable of running on E85 are on the road, compared with 230 million gasoline and diesel vehicles. But as of 2004, only 146,000 vehicles were actually using E85.

Why are so few cars using ethanol?

Not enough gas stations carry ethanol. Most stations that do are located in big corn-producing states, which cuts down on shipping costs. Out of the 556 stations nationwide that carry E85, only 118 are located along the East and West coasts. More stations are picking up ethanol, but shipping remains an issue. Ethanol can't be sent through gas pipelines; it has to be transported by truck, rail or barge.

So the benefits of ethanol aren't clear-cut yet. Why is there such a focus on it?

Environmentalists and Bush administration officials agree that corn-based ethanol is not the solution to our energy needs. For one, there isn't enough corn in the United States to make ethanol a significant replacement fuel. When Bush promotes ethanol, what he is banking on is the development of a still-experimental production process that would allow ethanol to be made from a variety of plants. Called "cellulosic ethanol," the process would cut down on the consumer cost of ethanol and use fewer carbon-based fuels to make it, thus reducing greenhouse-gas emissions even more. For instance, fields of prairie grass need much less help from fertilizers and farm equipment to grow.