Accessibility links
Cyrus Chestnut: Reinventing Elvis Jazz pianist Cyrus Chestnut and Elvis Presley aren't a likely pairing: Chestnut is one of the top pianists of a generation born many years after songs like "Love Me Tender" made Presley the king of rock 'n' roll. Hear an interview and performance from Studio 4A. 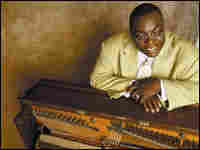 Chestnut in NPR's Studio 4A

Jazz pianist Cyrus Chestnut and pop icon Elvis Presley aren't a likely pairing: Chestnut is one of the top pianists of a generation born many years after songs like "Love Me Tender," "Hound Dog" and "Don't Be Cruel" made Presley the king of rock 'n' roll. But on Chestnut's new CD, Cyrus Plays Elvis, he offers a fresh outlook on Presley.

As a child, Chestnut was more interested in the music composed by Vince Guaraldi on Peanuts cartoons than Presley's hip-shaking antics. It wasn't until he recorded a version of "Love Me Tender" with a Chinese jazz vocalist that the wheels in his head started to turn. Chestnut says that in the moment while playing it, he realized that there was more to the song, so he decided to comb the Internet and track down some songbooks.

"I started listening and what I found out is that there are some similarities," Chestnut says. "Elvis loved blues and gospel. I love blues and gospel, so hence a connection. It was not my intention to re-create Elvis, just give an interpretation."

It was important to Chestnut that his versions would not be "corny" or what he calls "space age," essentially blowing out an interpretation to overly grandiose proportions. Instead, he wanted to "draw water from a dry well."

On a classic like "Heartbreak Hotel," Chestnut reveals a haunting and melancholy side, using the song's words as inspiration.

"Life kind of has a way of throwing you curve balls at any point of given time," Chestnut says. "I thought about heartbreak and I thought about the lyrics: 'Since my baby left me.' The person is distraught because the person who is close to him has left. The ceiling has fallen and the floor has dropped."

Chestnut aims to know as much about the song as possible in order to get inside of it. The words mean just as much to him, if not more than the chord progressions that propel the song. 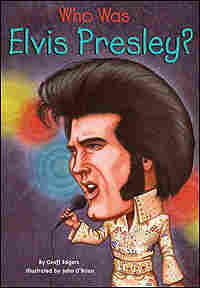 Elvis Presley's fans are all over the map. They come in all colors, shapes and sizes.

But a couple of groups may still need a nudge.

In his new illustrated biography of Presley, author Geoff Edgers targets a group he says under-appreciates "the King" — the 8-to-12-year-old set.

Edgers, a reporter at The Boston Globe, traces Presley's colorful roots to Depression-era Mississippi, then shows children how the singer created a sound all his own. Illustrator John O'Brien brings Presley to life with black-and-white illustrations on nearly every page.

Edgers speaks with guest host James Hattori about why children should know about Presley, and how they respond to his story.