Accessibility links
'Body Farm' Yields Data on Decomposition, Death Pioneering forensic anthropologist Bill Bass has created a revolutionary laboratory dedicated to researching human decomposition. Bass is the author of Beyond the Body Farm; he discusses what decomposing bones can tell police about a crime.

Watch a Science Friday video about the Body Farm

Pioneering forensic anthropologist Bill Bass has created a revolutionary laboratory dedicated to researching human decomposition. Bass is the author of Beyond the Body Farm; he discusses what decomposing bones can tell police about a crime.

Excerpt: 'Beyond the Body Farm' 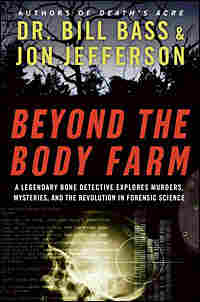 As fans of the television series CSI know, death scenes can capture a wealth of detail about what happens in the instant when human life is snuffed out—even, I can say with certainty, when that instant occurred nearly three thousand years ago.

More than four decades ago and six thousand miles away, I had one of my most memorable experiences in applying the tools of archaeology and anthropology to the questions of forensic science. The death scene lay in the ancient hilltop citadel of Hasanlu, in northwestern Iran, where a fierce army attacked the massive fortress, breached its mighty walls, and brought down its palace and temple in a rain of blood and fire. Hundreds had died in the battle and the blaze, but I was focusing on three of the dead, who were unearthed in a particularly dramatic discovery in the ruins.

Midway through the project, though, I began to fear that a fourth death might soon be involved: my own. As I lay doubled over, delirious for days on end, my circumstances may have been less heroic than those of the ancient warriors whose bones had drawn me here, but the setting—the way of life, the nearness of death, even the practice of medicine—had changed little in the twenty-eight centuries since the fortress fell.

In the summer of 1964, at age thirty-five, I was an eager assistant professor of anthropology at the University of Kansas at Lawrence. Although the ink on my Ph.D. from the University of Pennsylvania had been dry for only three years, by that time I'd excavated more skeletons than almost any other anthropologist in America. Starting in 1957, the summer after I entered graduate school at Penn, I'd worked for the Smithsonian Institution, which was excavating numerous Native American village sites throughout the Missouri River Basin. The Army Corps of Engineers was building a string of dams along the Missouri; the river's waters were rising; and the Smithsonian was racing to unearth and preserve as many relics and bones as possible before the sites were inundated forever. My first summer in the Missouri Basin, my crew and I painstakingly located and excavated several dozen Arikara Indian graves; by 1963, after I'd devised a way to use road-grading equipment to peel back the earth atop the graves without damaging the bones within, we were excavating several hundred each summer. I got so fast and efficient at excavating burial grounds that I eventually earned the label "Indian grave robber number one" from a Native American activist who disapproved of digging up Indian graves. (This chapter in my career is told in more detail in my memoir, Death's Acre, published in 2003.)

So although I was still relatively young in 1964, I'd racked up some unique and extensive experience, and it didn't come as a total surprise when I got a call from Bob Dyson, an up-and-coming archaeologist back at Penn, seeking help excavating ancient graves at Hasanlu. Millions of people are familiar with the work of Egyptologist Howard Carter, the British archaeologist who discovered the tomb of King Tut. Far fewer are acquainted with Bob Dyson's work, and that's a shame, because Bob was the Howard Carter of Hasanlu. Six years before inviting me to Iran, when he was a mere thirty-one years old, Bob made the discovery of a lifetime at Hasanlu. Beneath a mound of rubble and charred embers in the wreckage of an immense two-story palace or temple, he found the skeletal remains of three men trapped—crushed—when the burning roof collapsed and the massive walls toppled. As the debris was carefully brushed from the buried bones, it became clear that the three men had died while at a dead run, literally, their arms and legs frozen in perpetual near-motion. It was a remarkable snapshot of death, preserved for nearly three millennia.

Even more remarkable—and a key reason Bob invited me to Hasanlu—was the object cradled in the arms of the front runner. The object was a bowl (or a vase, or a beaker): a metal vessel measuring about eight inches high, seven inches across the top, and six inches across the base. The falling walls had flattened the bowl, of course, along with the guy carrying it. Even so, the bowl's elaborate ornamentation remained virtually intact and astonishingly detailed. An upper scene, enacted by a band of embossed figures encircling the bowl, showed three young men bringing offerings to the gods—two gods riding in chariots, and a third god wearing a horned headdress. The bowl's lower ring contained a series of smaller scenes and numerous figures, including a nude goddess, a male hunter or warrior, an eagle carrying a woman, another woman riding a lion, and a trio of people—a seated man, a woman, and a child, whom the woman is presenting to the man. The bowl was such an extraordinary find that Life magazine devoted an eleven-page spread to it—the equivalent, back then, of a one-hour television special hosted by Katie Couric or Diane Sawyer.

Despite its relatively small size, the bowl was quite heavy. That's because it was made of solid gold. Today—carefully guarded in a museum in Tehran—the bowl is one of Iran's richest archaeological treasures. Three millennia ago it was equally prized, occupying a sacred place in the citadel's palace or temple—as valuable as a freshly carved or painted masterpiece by Michelangelo would have been to a Renaissance pope or a Medici prince. Three men, at least, had died for the bowl's sake—caught for all time in a dramatic act of desperation.

Excerpted from Beyond the Body Farm by Bill Bass and Jon Jefferson. Copyright (c) HarperCollins Publishers. All rights reserved.