Accessibility links
New Republic: Farewell To Rick, Who Was Not Mitt GOP presidential candidate Rick Santorum suspended his campaign yesterday. Alec MacGillis of The New Republic describes how Santorum shifted the conversation among members of the Republican party not on ideological lines, but on class lines.

New Republic: Farewell To Rick, Who Was Not Mitt

New Republic: Farewell To Rick, Who Was Not Mitt 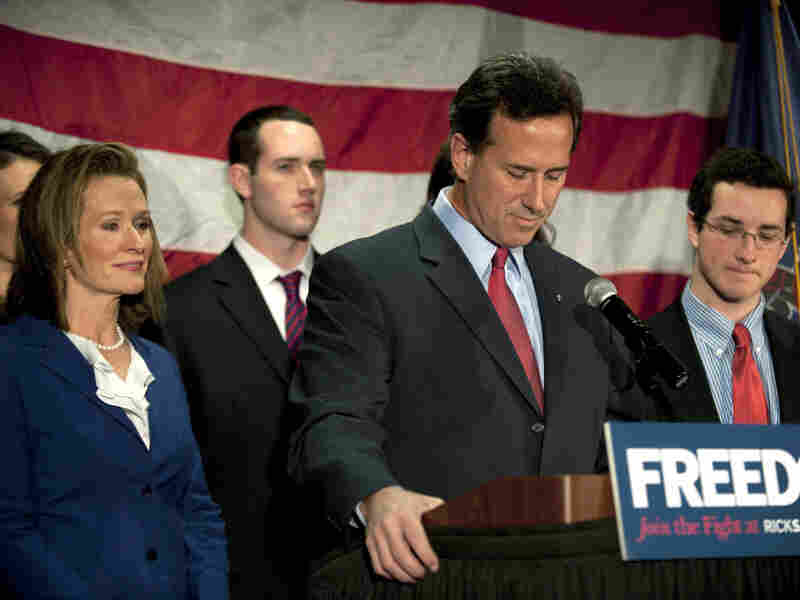 Surrounded by members of his family, Republican presidential candidate Rick Santorum announced he will be suspending his campaign during a press conference at the Gettysburg Hotel on April 10, 2012 in Gettysburg, Pa. Jeff Swensen/Getty Images hide caption 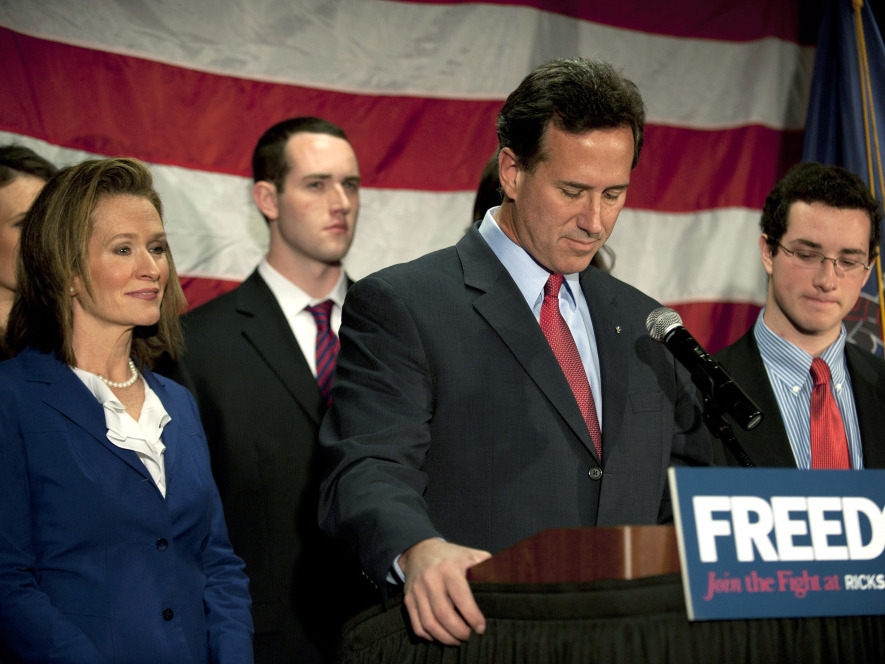 Surrounded by members of his family, Republican presidential candidate Rick Santorum announced he will be suspending his campaign during a press conference at the Gettysburg Hotel on April 10, 2012 in Gettysburg, Pa.

Read Another Opinion On Santorum Suspending His Campaign

Read Another Opinion On How Santorum Changed The GOP Primary

Alec MacGillis is a writer for The New Republic

Right around the time that Rick Santorum was making up his mind to end (or "suspend") his campaign for the Republican nomination, it was reported that Mitt Romney's campaign was pulling a harsh anti-Santorum ad from the Pennsylvania airwaves, out of deference to the fact that Santorum was having to tend to his 3-year-old daughter, Bella, during yet another visit to the hospital for the girl, who was born with the rare chromosomal disorder trisomy 18. But the respite would last only so long: "Once Bella is released from the hospital, the Romney campaign is expected to put the anti-Santorum ad back into its rotation, although that could take a day or two," the New York Times reported. This made one wonder: how, exactly, would this judgment be made? What is the appropriate time-lag between the release of a severely ill young girl and the bludgeoning of her father by a campaign with infinitely more resources? When exactly would the clock start ticking — the moment Bella re-emerged from the hospital, or when she arrived back home in northern Virginia? Would Team Romney consult an ethicist, perhaps?

Well, now the Romney crew is spared this fraught calculation. Santorum is out, and Romney is assuring us that the former Pennsylvania senator was an "able and worthy competitor." (That's not what the pulled Keystone State ad said: "We fired him as senator. Why promote him as president?") Which leaves the rest of us to ask the question that has hung over the Santorum campaign since his late-December surge in Iowa — what the hell was that all about?

Put me squarely in the camp that believed all along that this was not about Rick Santorum, really, but about Mitt Romney. While the talk has been all about Etch-a-Sketch the past few weeks, the real kid's game of the Republican primaries was one of those optical illusion puzzles where you have to discern the two different faces (say, an old woman and a young one) created by the contrast of black and white. Rick Santorum's appeal, to the extent it existed at all, was defined by the absence of Romney's, by the qualities he possessed that Romney lacks: sincerity, self-possession, middleclassness (no matter how much money Santorum has made as a Beltway bandit since leaving the Senate, he exudes an indelible middleclassness of the sort that Mitt Romney could not purchase for all the money in Switzerland. And it's not just the sweater vests.)

But being a foil will only get you so far. Even at the height of the Santorum boomlet in Iowa, it seemed clear that there was something missing in it, an enthusiasm fueling it independent of the context of the lackluster field of candidates. One scene stands out in my memory: Santorum, at the peak of his pre-caucus wave, arriving at a sports bar in Ames to greet Iowans as they watched the third-tier bowl game that Iowa State was playing in. The media horde that followed Santorum around the bar was enormous, but truly, no Iowan in that very crowded bar gave a damn. The loudest shouts from the crowd were angry hollers at the news guys to get their mike booms out of the line of sight to the TVs. Some Iowa caucus voters wanted an alternative to Romney, and we in the bored media pack wanted an alternative to Romney, and Santorum was going to have to suffice. But a mass movement this was not. Its limits were all but defined the night of the caucus itself, when Santorum, hoping to be announced the clear victor, waited way too long before giving his quite compelling televised speech. If anyone in New Hampshire or South Carolina or Florida was going to pick up the energy of his Iowa performance, they'd gone to bed before they had the chance of inspiration.

So what does it mean for the other guy, the guy whose ample deficiencies were brought to life in the paunchy form of Santorum? There will be much chatter now about Romney's coming Etch-a-Sketch shake, the inevitable move to erase the contemporary conservative orthodoxies he's embraced and whether that will cost him on the right. If you ask me, this isn't really the right question. Romney will get the hardcore conservatives, no matter whom they voted for in the primaries, because the hardcore conservatives loathe, or perhaps simply fear, our president. I think of people like Bill Connor, an Army veteran and 2010 candidate for lieutenant governor in South Carolina who is now a practicing attorney there and was a leading Santorum supporter in the state. I checked in with him this afternoon and he was fully ready to back Romney come November. "I am very concerned with the things Barack Obama has done the past few years and am concerned that if he's elected again there will be almost no check on what he would do in pushing us to the left, so I'm motivated to go in and vote for the Republican nominee," Connor said. "I saw Rick Santorum as being more conservative across the board; there was more passion there. But I think as we move toward the general election the passion will be there to get someone more conservative than Barack Obama."

The more pertinent question regards not ideology, but class. Here and there, Romney actually held his own in the primaries among "very conservative" or "Tea Party" voters — presumably because plenty of these voters saw him as the best route toward expelling the man they despise from the White House. But pretty much across the board, he did poorly among, well, poorer and more rural voters. It's been said before but can't be overstated: Romney's chances this fall will hinge largely on whether he can win big among the working-class whites that have become the Republican base. John McCain held an 18-point edge among these voters, but as big a margin as that was, it was smaller than George W. Bush's 23-point margin in 2004. A recent poll had Romney's lead with these voters at 17 points — sizable, yes, but he will need to surpass McCain in this category, a category whose share is shrinking with every passing election. And in the primaries, Santorum was cleaning his clock with these voters. To be sure, the general election is a different ballgame, and across big swaths of the country, working-class whites will flock to whomever is opposing Barack Obama. (Remember this amazing map?) But elections are won and lost on the margins, and in certain states and regions. Yes, most of those ardent Hillary 2008 supporters ended up voting for Obama, but there's no way to look at his performance in certain places (that map, again) and not conclude that there plenty of Hillaryites who stayed home or even went for McCain in places like, say, western Pennsylvania. It just happened that those marginal losses ended up not mattering. For Romney, they will matter. He will need every one of the working-class Republicans and independents I saw at Santorum events in Marshalltown, Iowa and Somersworth, N.H., people who spoke of Santorum less with genuine alacrity than with grudging acceptance — acceptance as someone whom they saw as one of them, and not one of the others guys, the other guys including not just Barack Hussein Obama, half-Kenyan by way of the South Side, but most definitely also Willard Mitt Romney, multimillionaire by way of Bain Capital.