Accessibility links
See-Through Piano Lid Transforms Performances A piano lid with transparent, louvered slats, or "sound mirrors," is changing performances. The Steinway-designed lid makes it easier for pianists to also conduct from the stage, because their view of the orchestra is no longer impeded. 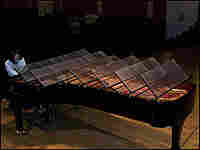 The "Sound Mirrors" piano lid makes it easier for pianists to also conduct from the stage, because their view of the orchestra is no longer impeded. Courtesy of Steinway Austria hide caption 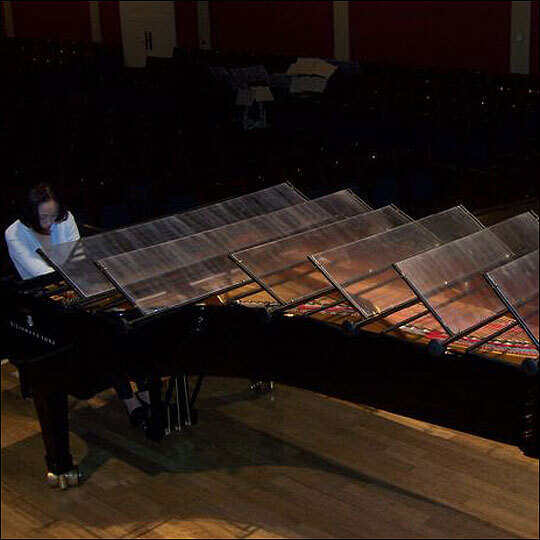 The "Sound Mirrors" piano lid makes it easier for pianists to also conduct from the stage, because their view of the orchestra is no longer impeded.

A traditional piano lid is a massive single piece of wood. It is hinged along the left-hand side, and for concerts it is raised — held up by a stick — so the sound bounces off the wood and is directed into the hall.

For concert pianists who only really need to see the conductor, traditional lids work well. But for pianists who also conduct from the keyboard, traditional lids block their view of half of the orchestra. Removing the lid clears the line of sight, but then the sound is no longer directed toward the audience.

Pianist and conductor Pierre-Laurent Aimard was on tour in Vienna in 2005, when a conversation he had with Steinway piano technician Stefan Knupfer led to a design to solve the problem. The prototype, called "Sound Mirrors," addresses both the sight and sound problems of a conventional lid.

With Sound Mirrors, the single piece of wood is replaced with six transparent louvered slats, like Venetian blinds. They angle the sound back at the soloist, who can still see through and over them. The soloist sits with his or her back to the audience, and while the audience might miss some theatrical flair, Aimard says the music itself is more important.

"If your goal is a certain truth, a certain simplicity, you can also do it showing your back or your face or your side to the audience," Aimard says.

Using Sound Mirrors helps Aimard hear more accurately the balance between the piano and the ensemble. He says the new see-through lid system also gives the piano itself a more spacious, transparent sound, because each of the slats projects a different register of the piano, rather than the concentrated, compact sound of a single lid.

Aimard has already recorded a disc of Mozart Piano Concertos with the Chamber Orchestra of Europe using the Sound Mirrors lid.