Accessibility links
Americans, Briton Share Nobel for Gene Manipulation Americans Mario R. Capecchi and Oliver Smithies and Sir Martin J. Evans of Britain won the 2007 Nobel Prize in medicine on Monday for devising the tools to figure out what individual genes do and how to fix them. The widely used process has helped scientists use mice to study heart disease, diabetes, cancer, cystic fibrosis and other diseases. 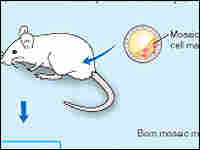 Two American scientists and a British researcher share this year's Nobel Prize in Medicine or Physiology for devising the tools to figure out what individual genes do and how to fix them.

The Nobel Committee says these scientists laid the groundwork for the main work in biology today: figuring out what each of the 30,000 human genes does.

Capecchi invented a way to target single genes and turn them off to see what they do. Smithies used gene targeting to correct defective genes. Evans showed that embryonic stem cells can integrate corrected genes into living animals.

Together, these techniques are a major reason why scientists are so excited about the potential for embryonic stem cell research to cure a wide range of human ailments.

"Gene targeting has pervaded all fields of biomedicine. Its impact on the understanding of gene function and its benefits to mankind will continue to increase over many years to come," said the citation for the $1.54 million prize.

The widely used process has helped scientists use mice to study heart disease, diabetes, cancer, cystic fibrosis and other diseases.

The first mice with genes manipulated in this way were announced in 1989. More than 10,000 different genes in mice have been studied with the technique, the Nobel committee said. That's about half the genes the rodents have.

Steve Brown, director of the mammalian genetics unit at the Medical Research Council in London, said the three researchers have "given us the toolkit to understand how genes function" in mice and so, by extension, in humans. As a result, of their work, he said, "we're on the cusp of having a much better understanding of the relationship between genes and disease."

In a telephone interview from Salt Lake City, Capecchi called the award "a fantastic surprise."

He said he was deep asleep when he got the phone call from the Nobel committee at 3 a.m. local time. "He sounded very serious," Capecchi said, "so the first reaction was, `This must be real."'

Smithies told The Associated Press getting award was "very gratifying." After working on the research for more than 20 years, he said it's "rather enjoyable being recognized at this level."

Smithies said he hopes winning the prize will make it easier to secure funding for other work.

Capecchi's work has uncovered the roles of genes involved in organ development in mammals, the committee said. Evans has developed strains of gene-altered mice to study cystic fibrosis, and Smithies has created strains to study such conditions as high blood pressure and heart disease.

The medicine prize was the first of the six prestigious awards to be announced this year. The others are chemistry, physics, literature, peace and economics.

The prizes are handed out every year on Dec. 10, the anniversary of award founder Alfred Nobel's death in 1896.

Associated Press contributed to this report.