Accessibility links
Thomas Accuser Angela Wright Sticks to Claims Angela Wright worked with Supreme Court Justice Clarence Thomas at the Equal Employment Opportunity Commission before his elevation to the bench. She alleges that Thomas sexually harassed her while they worked together. 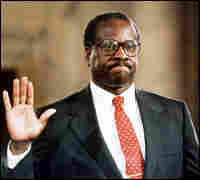 In Supreme Court Justice Clarence Thomas' new memoir, My Grandfather's Son, he addresses the sexual harassment allegations made by Anita Hill that once threatened his appointment to the high court.

Angela Wright also worked with Thomas at the Equal Employment Opportunity Commission and alleged that she, too, was sexually harassed by him. She was later fired. Wright shares her story, including why she did not testify against Thomas during his 1991 Senate confirmation hearings.

The following is an excerpt of our interview with Wright:

First of all, I would like to ask, why didn't you testify? You were subpoenaed to come to Washington. You were interviewed. Your interview was placed in the record, but you were never called. Now, [former] Republican [Senator] Alan Simpson, at the time, said you got cold feet. Did you get cold feet?

No, absolutely not, Michel. I was fully prepared to testify. I realized it was not going to be easy, but I was – once I was there, I was committed to going through with the process. The only reason I didn't testify is because I wasn't called to testify. I was there for three days, waiting with my attorneys for the Judiciary Committee to call me, and it was their decision...

How did your story come to light to begin with about your experience at the EEOC?

There again is another misconception. I worked at the Charlotte Observer at the time ... I had gone home, turned on CNN, and saw Anita Hill standing there ... I didn't know her ... But I knew that Clarence Thomas was capable [of what he stood accused of] because he had made similar remarks to me and in my presence about my body and other women's bodies, and he did – he was very egotistical, and he did pressure me to date him, and he did drop by the house when unannounced.

... I had come into my office one day, and there was this letter in my chair. And when I opened the letter, it simply said, your services are no longer needed ...

Oh really it was terrifying. All of a sudden, I have people quoted, like Senator Orrin Hatch who had never met me, saying things like he was going to hand me my A-S-S on a silver platter. There were people who were calling my home. When I got on the plane there was this man following me on the plane and being rather confrontational.

I know that you read the memoir. You read it after we contacted you. You aren't in the book. I don't know how you feel about that. But I just wondered if you had any reaction to Clarence Thomas' memoir. Is there anything that you learned from the book that changed perhaps the way you view him or what happened between you?

Well, no, I always knew him to be a mean-spirited, nasty, fairly unstable person. It was enlightening to read his account of his childhood, because that did put it in perspective. Actually, my heart went out to the young child Clarence, once I understood he was a child whose father was absent, whose mother sent them away, who was raised by an unemotional grandfather. I finally understood where all his anger and mean-spiritedness came from. I knew it was there.

Hear the full interview by clicking the "Listen" button in the upper left corner of this page, and by clicking on Part II of the exclusive interview with Angela Wright.