Accessibility links
Air Force Plays Smaller Role in Iraq The nature of the Iraq war does not lend itself to the use of heavy airpower, so airmen rarely find themselves flying airplanes. When airplanes are required, they're usually unmanned and controlled by pilots via satellite from the Nevada desert. 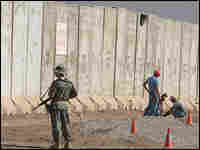 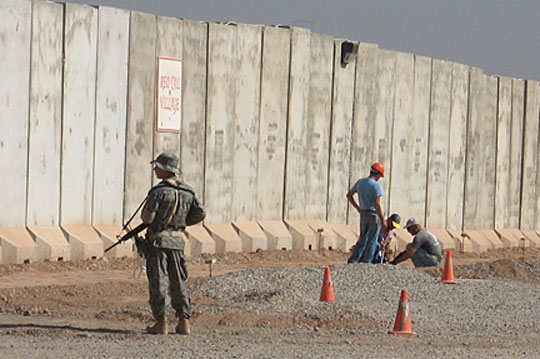 A U.S. airman guards a group of construction workers laying down pipes at Balad Air Base.

Most airmen in Iraq rarely get near an airplane.

That's because the nature of the Iraq war doesn't lend itself to the use of heavy airpower, according to Lt. Gen. Gary North, the regional air commander in Iraq.

And so young airmen like Capt. Brad Bucholz are quickly becoming the face of the U.S. Air Force. Bucholz leads a crew of 17 airmen working traditional construction jobs inside an Army base north of Baghdad.

When airplanes are required in Iraq, more often than not, they're flying without pilots. Most of the fixed-wing flights currently over Iraq are unmanned and are controlled, via satellite, by pilots at an air base in Las Vegas. The exact number of unmanned airplanes flying 24 hours a day over Iraq is classified, but it's estimated that they now account for the overwhelming majority of the reconnaissance flights over the country.

And in a few weeks, the Air Force will deploy its first generation of unmanned bombers. The plane is ominously called the "Reaper," and it carries a payload of munitions similar to that of the F-16 fighter jet. The Reaper will also be controlled by pilots sitting at desks in the deserts of Nevada.

Over the past four years, the Department of the Air Force has been feeling the heat over its comparatively limited role in Iraq.

While the Army and the Marines are now awash in extra funds, the Air Force faces severe cutbacks.

The Air Force is the second-largest service branch, accounting for about one-quarter of all active-duty military. But airmen make up only about 5 percent of the total troop presence in Iraq. And the numbers have prompted Pentagon bean counters to shift Air Force money away to the other service branches.

Because airmen, on average, serve four-month tours of duty (compared with the average Army tour of 15 months), the high rate of turnover can often lead to administrative blunders. One Army officer privately complained that when the new airmen come in every few weeks, it is "hellish, especially when you're trying to coordinate with your Air Force counterparts."

The Air Force has received the message. Top officials are now quietly considering whether to extend Air Force tours of duty from four to six months.

The Army will soon run out of manpower to sustain the large-scale occupation of Iraq. And so the Air Force, with its 340,000-strong active duty component, may begin to fill some of that shortfall.