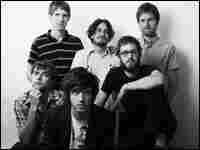 The first incarnation of what would become Okkervil River formed while longtime friends Will Sheff and Seth Warren were still living in their native New Hampshire. Though college took them on separate paths, Warren and Sheff both eventually relocated to Austin, and Okkervil River began in earnest. After a small handful of self-released recordings, the band signed a label deal in time to release 2002's Don't Fall in Love with Everyone You See, which drew praise for its delicate songwriting and thoughtful lyrics. It wasn't until 2003's Down the River of Golden Dreams, however, that Okkervil River fully came into its own.

The songs on the group's new disc, The Stage Names, number among Okkervil River's finest work. On the whole more reflective than previous records, The Stage Names finds the band's devastating wordplay and heartfelt musicianship meshing seamlessly on every song. Consequently, the songs convey a rare depth that contributes to their status as some of the year's best.