Accessibility links
'Surface Chemistry' Nets Nobel Prize for German German researcher Gerhard Ertl has won the 2007 Nobel Prize in chemistry. Ertl developed new methods for studying the "surface chemistry" that is critical to everything from catalytic converters for cleaning up auto exhaust, to the chemical reactions that created the hole in the ozone layer.

This "surface chemistry" is critical to everything from the catalytic converters that clean up auto exhaust to the chemical reactions that created the hole in the ozone layer. 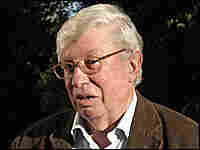 German Gerhard Ertl at the Fritz-Haber-Institute in Berlin after he won the 2007 Nobel Prize in chemistry. Khue Pham for NPR hide caption

German Gerhard Ertl will receive the 2007 Nobel Prize in chemistry for studies of chemical reactions on solid surfaces, which are key to understanding questions like why the ozone layer is thinning.

Ertl's research laid the foundation of modern surface chemistry, which has helped explain how fuel cells work, how catalytic converters clean up car exhaust and even why iron rusts, the Royal Swedish Academy of Sciences said in announcing the prize on Wednesday.

Ertl, who won the prize on his 71st birthday, told reporters that it "is the best birthday present that you can give to somebody."

The academy said Ertl provided a detailed description of how chemical reactions take place on surfaces and studied some of the most fundamental mysteries in that field.

Ertl showed how to obtain reliable results in this difficult area of research, and his findings applied in both academic studies and industrial development, the academy said.

"Surface chemistry can even explain the destruction of the ozone layer as vital steps in the reaction actually take place on the surfaces of small crystals of ice in the stratosphere," the award citation said.

Prizes for literature, peace and economics will be announced through Oct. 15.

The awards — each worth $1.5 million — will be handed out by Sweden's King Carl XVI Gustaf at a ceremony in Stockholm on Dec. 10.