Accessibility links
U.S. Builds Air Base in Iraq for the Long Haul The U.S. military base in Balad, about 60 miles north of Baghdad, is rapidly becoming one of the largest American military installations on foreign soil. The base is one giant construction project, all with an eye toward the next few decades.

Listen
U.S. Builds Air Base in Iraq for the Long Haul 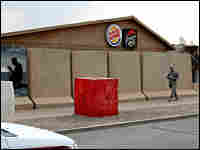 A heavily fortified Burger King and Pizza Hut restaurant in the Balad Air Base is seen next to another sign of permanence: sidewalks. Guy Raz, NPR hide caption 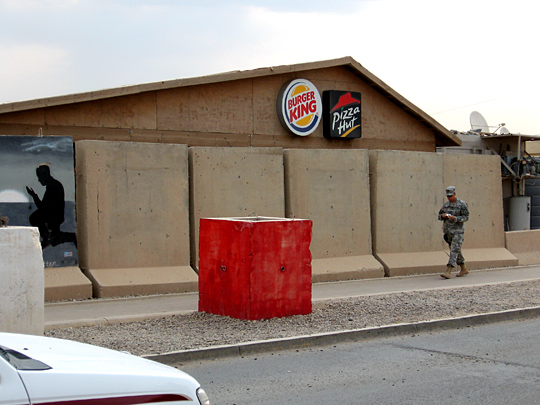 A heavily fortified Burger King and Pizza Hut restaurant in the Balad Air Base is seen next to another sign of permanence: sidewalks.

The U.S. military base in Balad, about 60 miles north of Baghdad, is rapidly becoming one of the largest American military installations on foreign soil.

About 40,000 troops, contractors and Defense Department civilian employees live there.

The base is one giant construction project, with new roads, sidewalks, and structures going up across this 16-square-mile fortress in the center of Iraq, all with an eye toward the next few decades.

Balad Air Base is now the headquarters for an Air Force Expeditionary Wing; billions of dollars are being spent on upgrades at the base.

"The runway has been reworked; it was basically falling apart the last time we were here," said Col. Charles Croft, an F-16 pilot, who has watched the improvements over the years.

And as for the accommodations, Croft said, "Instead of tents we've got modular trailers, which is really nice. I stayed in tents the first couple times I was around here."

The base is so big that there is a regular bus service within its perimeter to ferry around the tens of thousands of troops and contractors who live here. And the services are commensurate with the size of the population.

The Subway sandwich chain is one of several U.S. chains with a foothold here. There are two base exchanges that are about as large as a Target or K-Mart. Consumer items from laptop computers to flat-screen TV's to Harley Davidson motorcycles are available for purchase.

"It's definitely becoming more settled. It's less expeditionary, feeling a lot more like a base back home," Scott said. "We're getting a lot of services here and the food's getting better."

Back in Washington, Pentagon officials say that the U.S. military is in Iraq at the invitation of the Iraqi government, and that it will depart when asked to do so.

But several senior military officials have privately described Balad Air Base, and a few other large installations in Iraq, as future bases of operation for the U.S. military. The term used is "lily pad," a description of the military jumping from base to base without ever touching the ground in between.

And as the base's commander, Air Force Brig. Gen. Burt Field noted, the spot is an ideal staging ground.

"It's centrally located, it's a large facility; we've worked very hard to improve the situation," Field said. "So, I mean, it would certainly be one they should consider if we're going to be a long-term presence here."

Every Thursday, a group of Iraqi merchants arrives on base to sell pirated DVD's and knock-off Saddam Hussein memorabilia. The troops call it the "haji mart."

For many of the Air Force personnel stationed here, like Maj. Jeremy Saunders, it's the only time they will ever meet an Iraqi during their deployment. The vast majority of airmen will never leave the base.

When his family back home asks him what Iraq was like, Saunders says he's not really sure.

"The pictures we see are the same they see," Saunders said. "So really, we don't know much more about it over here than they do over there."

At the base, the sounds of construction and the hum of generators seem to follow visitors everywhere. Seen from the sky at night, the base resembles Las Vegas: While the surrounding Iraqi villages get about 10 hours of electricity a day, the lights never go out at Balad Air Base.