Accessibility links
'Lars and the Real Girl' A 27-year-old loner (Ryan Gosling) orders an anatomically correct silicone doll online and introduces her to his family and friends as Bianca, a friend he met on the Internet. His family consults a doctor who encourages them to go along with Lars' delusion. (Recommended.)

'Lars and the Real Girl'

'Lars and the Real Girl' 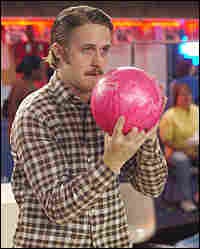 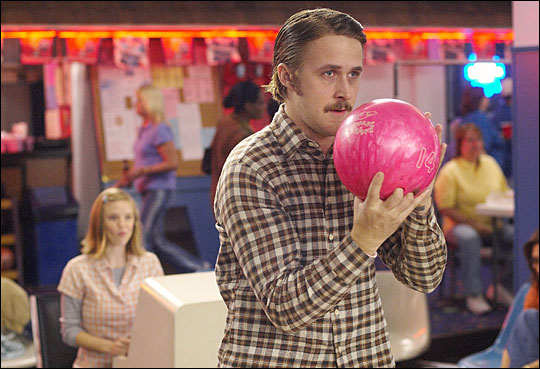 Ryan Gosling stars as Lars Lindstrom in Lars and the Real Girl.

Twenty seven-year-old Lars (Ryan Gosling) is so painfully withdrawn that his sister-in-law must literally tackle him before he'll walk twenty paces to his brother's house for dinner. He's polite, sweet, good-natured, and utterly reclusive — a loner at the office, keeping to himself at church.

Then one day, he orders an anatomically correct silicone doll online, and starts introducing her around as his girlfriend Bianca. Yeah, yeah ... the premise sounds like a one-joke sex comedy — but as Lars' small town rallies to support him in his delusions, the film starts exploring family, psychiatry, community, awkwardness, and it all turns surprisingly touching.

Much of the reason is Gosling, who's been playing wounded a lot of late — a drug-addicted teacher in Half Nelson, an abandoned lover in The Notebook — and whose belief in this guy's quirks makes Lars plausible without turning him precious. His belief makes Bianca plausible too.

I realized at one point, as the camera backed up across the room at a party to watch him as he leaned over to whisper in the doll's ear, that I knew precisely what he was telling her. (Recommended.)