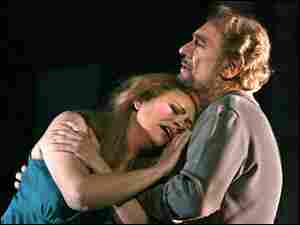 You might think of the music we've got here as another episode in the continuing saga of "The Lords of the Ring." Yes, that's "Lords of the Ring," not Lord of the Rings. In other words, this isn't some exclusive, audio version of J.R.R. Tolkien's epic series of novels, or of the blockbuster film trilogy.

If you're disappointed at not finding Tolkien or Peter Jackson here, you shouldn't be. What we do have is every bit as compelling. It's Die Walkuere, the brilliant second installment in Richard Wagner's spectacular The Ring of the Nibelungen. That four-opera cycle — which lasts even longer than the combined, extended editions of Jackson's movies — tells the story of an all powerful Ring that eventually has several "Lords," none of whom come to a good end. You'll probably find parallels between Tolkien's story and Wagner's, even though Tolkien denied them. And while Wagner's dramas may lack widescreen, digital special effects, they make up for it with music that instantly transports listeners to another world, sight unseen.

On World of Opera, host Lisa Simeone brings us all the action from the The Washington National Opera, in a production of Die Walkuere starring the opera company's general director. But, not to worry — when this administrator steps into the fray, it's not like, say, George Steinbrenner playing shortstop for the Yankees, because this isn't just any General Director. The chief opera admistrator in Washington also happens to be a fairly well-known tenor, Placido Domingo, who takes the heroic role of Siegmund.

The Story of 'Die Walkuere' 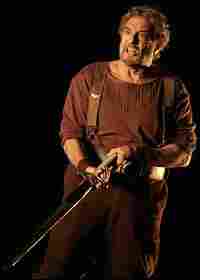 Siegmund, played by Placido Domingo, wields the invincible sword Nothung, left for him by his father Wotan, king of the gods. Karin Cooper hide caption 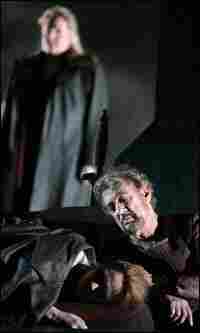 Wotan (bass-baritone Alan Held) knows he must use his powerful spear to assure that his own son, Siegmund, dies in battle. Karin Cooper hide caption 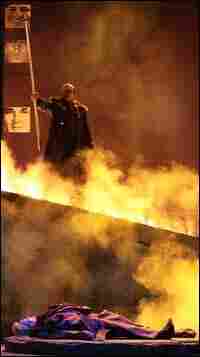 ACT ONE: The drama begins with a violent storm. The setting is a hut deep in the forest, the home of Sieglinde and Hunding. Its roof is supported by the branches of a tree, which rises through the center of the hut.

Sieglinde and her brother, Siegmund, are the children of the god Wotan and a mortal woman. They are also part of a scheme Wotan has concocted to win back the all-powerful Ring, made from gold stolen by the Nibelung Alberich in the first installment of Wagner's Ring cycle, Das Rheingold. But Siegmund and Sieglinde have never known each other, as they were seperated as children. Sieglinde is now married, against her will, to the warrior Hunding.

Siegmund has been wounded in battle, and approaches Sieglinde and Hunding's hut seeking refuge. Sieglinde warily attends to him — at least until the brutish Hunding comes home. When he quizzes Siegmund about his identity, the two discover that their clans are mortal enemies. Hunding says he'll offer his hospitality for one night, but in the morning, the two must fight to the death.

Sensing a connection with Siegmund, Sieglinde slips a sleep-inducing drug into Hunding's nightcap. Alone together, Siegmund and Sieglinde recognize each other as brother and sister. They also fall passionately in love — which will prove inconvenient, to say the least.

The firelight illuminates the handle of a sword protruding from the tree. The sword is called Nothung and it was put there by Wotan, meant for Siegmund in his time of need. Many men have tried to take the sword, but none have had the strength to pull it from the tree. Siegmund grasps the handle, and pulls the sword loose. As the act ends, Siegmund and Sieglinde embrace again, then flee into a moonlit night.

ACT TWO: Wotan tells Brunnhilde to watch over Siegmund, his mortal son. Brunnhilde is Wotan's daughter, fathered with Erda, the all-knowing Earth Goddess. Brunnhilde and her eight sisters are the Valkyries, warrior maidens whose sacred task is to carry fallen heroes from the field of battle to Valhalla, the castle of the gods.

With Brunnhilde gone, Wotan is confronted by Fricka, his wife, who is also the Goddess of Marriage. She's never been pleased about Wotan's various liaisons and their resulting offspring, and she objects to the order he has just given Brunnhilde. She finds it particularly egregious because Wotan has allowed the incestuous relationship between Siegmund and his married sister, Sieglinde. Wotan, grumbling a bit, concedes her point. When Fricka leaves and Brunnhilde returns, he rescinds his previous orders and reluctantly commands her to allow Siegmund to die in combat with Hunding.

Brunnhilde finds Siegmund and Sieglinde alone in the forest. Sieglinde is exhausted by their flight from Hunding, and they stop so she can sleep. Brunnhilde shows herself to Siegmund, saying that he's about to die and will accompany her to Valhalla, where he'll be united with his father and all the fallen warriors. Siegmund asks if Sieglinde will be there, as well. When Brunnhilde says no, he refuses to go with her.

Moved by the couple's love, Brunnhilde can't bring herself to obey Wotan's orders. Hunding arrives with his warriors, determined to take Sieglinde back and kill Siegmund. With Nothung as his seemingly invincible weapon, and Brunnhilde shielding him from harm, Siegmund is on the verge of victory. But Wotan has been observing, and intervenes. The god raises his spear, Nothung shatters and Siegmund is killed. Brunnhilde escapes, taking Sieglinde with her.

Wotan looks sadly at his son's body. He tells Hunding to go, and with that single word, Hunding falls dead. But Wotan still has to deal with his disobedient daughter, who has disappeared with Sieglinde, and he quickly leaves to find her.

ACT THREE: The famous opening of the final act takes place high in the mountains, where the Valkyries are calling to each other from peak to peak. (This same music is featured everywhere from the helicopter attack scene in Apocalypse Now to a recent sneaker commercial, and it's a favorite on concert programs.)

When Brunnhilde arrives, carrying Sieglinde, her sisters are worried about Wotan's anger and are afraid to hide them. Brunnhilde gives Sieglinde the broken pieces of Siegmund's sword, and tells her to hide in the forest.

Wotan appears, calling for Brunnhilde, and the other Valkyries flee. In an emotional exchange, he announces her punishment for disobeying him. She'll be put to sleep on a rock, to be claimed by the first mortal man who finds her there. Brunnhilde begs him to surround her with fire, so that only the bravest hero will dare to approach her. Stricken with grief at losing his daughter, Wotan agrees. The fire god Loge works his magic, and Wotan moves away, sadly, through the flames.