Accessibility links
Turkey Calls Its Envoy Home After 'Genocide' Vote In the wake of a House committee vote to label as genocide the deaths of more than 1 million Armenians at the hands of Ottoman Turks a century ago, Turkey's ambassador to the U.S. was recalled for consultations. He will be gone for a week or 10 days, a foreign ministry official says.

In the wake of a House committee vote to label as genocide the deaths of more than 1 million Armenians at the hands of Ottoman Turks a century ago, Turkey's ambassador to the U.S. is leaving.

According to the Associated Press, Ankara has recalled him for consultations. A spokesman for the Turkish foreign ministry says the ambassador will be gone for a week or 10 days — time to discuss the matter.

In Turkey, reaction to Wednesday's action in the House has been swift and negative. The country's president called it "unacceptable" and "not worthy of the respect of the Turkish people." 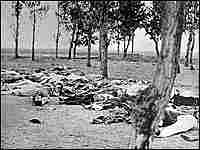 The bodies of dead Armenians lie in a grove of trees in eastern Turkey. The deaths are a result of what is now being called genocide. Bettmann/CORBIS hide caption 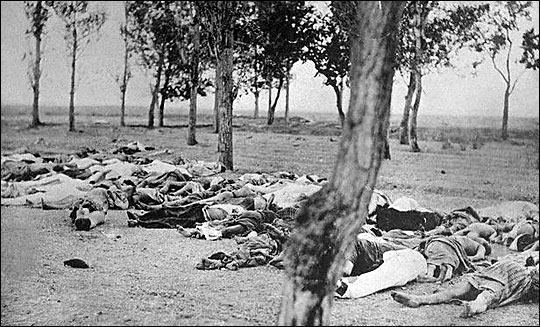 The bodies of dead Armenians lie in a grove of trees in eastern Turkey. The deaths are a result of what is now being called genocide.

The term — from Greek and Latin roots meaning "the massacre of a family, tribe or race" —was coined in 1943 by Raphael Lemkin, a Jewish legal scholar from Poland. In the 1930s, Lemkin sought unsuccessfully to get the League of Nations to recognize such killings as an international crime. As examples, he cited the massacre of Armenians during World War I and the slaughter of Assyrians in Iraq in 1933.

After World War II, Lemkin's idea of genocide as an international crime became one of the legal bases for the Nuremberg trials of Nazi war criminals.

In 1948, the United Nations adopted the modern definition of genocide, listing "acts committed with intent to destroy, in whole or in part, a national, ethnical, racial or religious group." Those acts included:

• killing or causing serious physical or mental harm to members of the group,

• Forcibly preventing births among the group, or forcibly sending its children to be reared by members of another group.

The U.N. convention on genocide didn't become law until 1951, after 20 U.N. members had signed it. The United States was the last of the five permanent members of the U.N. Security Council to sign it – in 1988 – and it didn't begin to be enforced until the 1990s, with prosecutions for genocide in Kosovo and Rwanda. 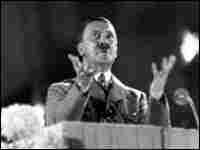 "When the Turkish authorities gave the orders for these deportations, they were merely giving the death warrant to a whole race; they understood this well, and, in their conversations with me, they made no particular attempt to conceal the fact..."

— Henry Morgenthau, Sr., American ambassador to the Ottoman Empire, in a 1919 memoir.

"Who, after all, speaks today of the annihilation of the Armenians?"

— Adolph Hitler in 1939, before the invasion of Poland. He was defending his order to massacre Poles.

"The United States has a compelling historical and moral reason to recognize the Armenian Genocide, which cost a million and a half people their lives, but we also have a powerful contemporary reason as well: How can we take effective action against the genocide in Darfur if we lack the will to condemn genocide whenever and wherever it occurs?"

— Rep. Adam Schiff (D-CA), during the 2007 debate on the Armenian genocide resolution.

Some say it was the first genocide of the 20th century — tens of thousands of Armenian men, women and children killed by Turkish troops, and hundreds of thousands more dead of starvation or exposure to the weather on forced marches and in concentration camps.

Turkey and its supporters say the Armenians were killed in battle or by harsh conditions that both sides suffered equally.

The controversy revived as the House Foreign Relations Committee approved a measure that would officially declare the deaths to be genocide. Here are some of the key questions on the issue:

How many people died?

No one denies that hundreds of thousands of Armenians died in the Ottoman Turkish Empire from 1914 to 1917. The modern Turkish government says about 300,000 Armenians died – mostly, it says, in fighting that was part of World War I. Armenians says the number reached as high as 1.5 million, as part of a deliberate, systematic effort to destroy the Armenian population.

How did it start?

Animosity between Turks and Armenians stretches back over centuries. A key factor is religion: Armenians are mostly Christian, Turks mostly Muslim. During the Ottoman Empire, Christians were treated as second-class citizens, and when the empire began to crumble in the 19th century, an Armenian resistance movement took hold in what is now eastern Turkey. Armenian nationalists sided with Christian Russia during the Russo-Turkish war of 1877 and later formed separatist groups.

Turkish accounts of the situation sound eerily like U.S. military accounts of the insurgency in Iraq. They say the resistance was incited by outsiders, Armenians from the Russian side of the border who wanted to undermine the Ottomans by stirring up unrest.

When Turkey and Russia faced off again during World War I, many Turks saw the Armenians as terrorists and traitors. Turkish accounts of the run-up to the war claim that Armenian guerrillas, armed by Russia, attacked Muslim villages and massacred their inhabitants.

In 1915, the Turkish government passed a law allowing it to deport Armenians from eastern Turkey as a national security risk. Turkish troops killed resisters and herded tens of thousands of Armenians on forced marches to camps in northern Syria and Iraq. Accounts by U.S. and British diplomats of the time say the Turkish troops and paramilitaries robbed, raped and murdered deportees along the way, leaving the survivors to die without food or shelter in the desert. Turks counter that these allegations were wartime propaganda by the countries arrayed against Turkey and its World War I allies, Germany, Austria-Hungary and Bulgaria.

What determines whether an act can be called genocide?

In the eyes of some scholars, the question of genocide comes down not to how many Armenians died, but whether the Turkish government actually set out to annihilate them because of their ethnicity. Bernard Lewis, an emeritus professor of Near Eastern Studies at Princeton, says it may well be likely that a million Armenians died, but he asserts that there's no evidence that the Turkish government made a "deliberate preconceived decision" to carry out massacres. In an interview with the French newspaper Le Monde, Lewis instead called the deaths a "brutal byproduct of war."

A French court later found Lewis guilty of denying the Armenian genocide and fined him a symbolic one franc.

Turks and others who deny that genocide occurred have also used the courts to make symbolic gestures. In 2005, Turkish novelist Orhan Pamuk was charged with "insulting Turkishness" for complaining in an interview that "a million Armenians were killed in these lands and nobody dares to talk about it." The case against the Nobel Prize winner provoked an international outcry from free-speech advocates, and the charges were eventually dropped.

Why is Congress taking this issue up now?

Congressional committees have voted repeatedly on similar resolutions in the past (the last time, in 2005, the vote was 40-to-7 in favor). The reason it's gotten so much attention this time is that the new Democratic leadership in the House promised to bring it to a floor vote if it passed in committee. That's something the former speaker, Republican Dennis Hastert, had refused to do, in order to spare the Bush administration from the awkward position of having to oppose it for the sake of maintaining good relations with Turkey.

House Speaker Nancy Pelosi will determine whether the Foreign Affairs Committee resolution comes to a vote on the House floor. She comes from California, a state with a large Armenian population, and she's on record as favoring the resolution.

President Bush is strongly opposed to the idea of the U.S. proclaiming that there was an Armenian genocide, saying it would hurt U.S. relations with Turkey, and possibly reduce Turkey's cooperation in the war in Iraq. More than 20 countries have officially declared that genocide was practiced against the Armenians, including France, Greece and Russia, which have significant ethnic Armenian populations.