Accessibility links
Pepe Romero and the Art of the Spanish Guitar Pepe Romero is from the distinguished Romero family of guitarists from Spain, called "The Royal Family of the Guitar." In the WGBH studio, Romero plays music from his homeland and recalls waking each morning as a child to the sounds of his father's guitar.

Pepe Romero and the Art of the Spanish Guitar

Pepe Romero and the Art of the Spanish Guitar

Romero plays his own Flamenco tune 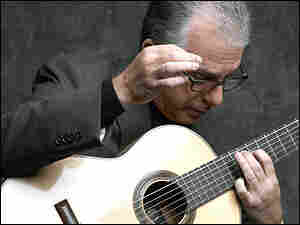 In a strange world renowned for its prima donnas and gnarly characters, I continue to be surprised by a fairly consistent truth: The greatest artists are, generally, the most humble and unaffected. Today, many of the world's most commercially successful musicians are deflective about playing a live gig on radio. They'd rather not, because... they don't have to.

Pepe Romero is a scion of the supreme "Royal Family" of the Spanish guitar. Yet, as an artist, he is both humble and generous. The opportunity to have a casual visit and share the memories and music that was (and still is) important to his family was an honor. He is, truly, a Gentilhombre, though not the same one for whom Rodrigo wrote and named his famous concerto. (That was Segovia.)

Rodrigo wrote a different concerto for Pepe Romero (Concierto para una Fiesta), who speaks of it as an inexplicable gift from a god. For Pepe, it seems, is simply the humble servant selected to channel these great gifts to his extended family: music lovers everywhere.

He spoke of his family and their love for music and for each other as if we knew them and understood. He also played a brief favorite written by his father, Celedonio, the Romero Patriarch. Such easy intimacy is itself a gift. Perhaps it's the easy confidence that comes with a lifetime spent performing with the greats of our day, but somehow Romero knew he was with members of that family here in our WGBH studio, and delighted to play as if in front of sell-out crowd at Carnegie Hall.

Pepe Romero is the best-known member of the distinguished Romero family of guitarists from Spain, often called "The Royal Family of the Guitar." He studied with his father, Celedonio, and made his public debut in Seville, performing with his father at age 7.

Pepe and his brothers Angel and Celin have been knighted by King Juan Carlos of Spain. The family now extends into a third generation, with sons of all three brothers playing guitar. Pepe Jr. has now become a respected luthier, building guitars for his father and others.

Pepe Romero's first recording featured traditional flamenco music of his native Andalucia, and was made when the young guitarist was just 15. Since then, Romero has recorded more than 50 albums, including a best-selling disc of Rodrigo's Concierto de Aranjuez with Sir Neville Marriner and the Academy of St. Martin-in-the-Fields.

Romero has performed with many of the world's greatest orchestras and conductors. His style, incorporating traditions of flamenco and classical, has inspired a number of composers, including Rodrigo, Torroba and Palomo, to write music especially for him.