Accessibility links
NPR Poll: Bush Rating Weighs Down GOP Prospects President Bush's job approval rating remains anemic, creating a big drag on the Republican Party, a new poll for NPR shows. Although the Democratic-controlled Congress is even more unpopular than the president, voters aren't looking at Republicans as the solution. 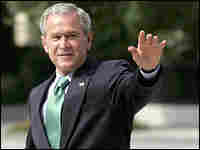 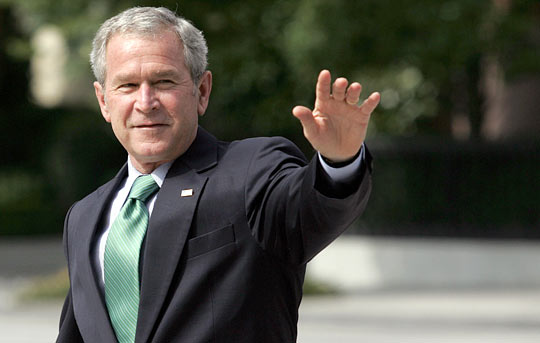 The poll was conducted for NPR between Oct. 4 and Oct. 7, 2007, by Public Opinion Strategies and Greenberg Quinlan Rosner Research. It consisted of a national telephone survey of 800 likely voters. The survey has a margin of error of +/-3.46 percentage points.

President Bush's job approval rating remains anemic, creating a big drag on the Republican Party, a new poll for NPR shows. Although the Democratic Congress is even more unpopular than the president, that's not leading voters to look at Republicans as the solution.

Likely voters have grown even more pessimistic about the direction of the country, according to the bipartisan poll. Sixty-eight percent say the country is on the wrong track, while only 23 percent say it's heading in the right direction.

That's not a good sign for the Republicans as they try to convince voters to give them a third term in the White House, according to Stan Greenberg, the Democratic half of the polling team.

"The overall mood is the bleakest I've ever seen," Greenberg says. "In our polling, it's worse than 1992 when [President Bill] Clinton came in. The country's in a change mood — in a very frustrated, angry change mood."

So how strong is the mood for change?

Greenberg points to the generic presidential ballot question. Among likely voters, 49 percent would select the Democratic candidate and 36 percent the Republican candidate if the election were held today.

But when the names of actual candidates were plugged into the question — in this case the two national frontrunners — the spread narrows dramatically. Democrat Hillary Clinton leads Republican Rudolph Giuliani by 3 percentage points — 47 percent to 44 percent.

"In this political environment, if the Democrats don't win the presidency, they should stop trying," Bolger says, adding that with that close of a margin, they risk losing to the Republicans.

But ironically, strongly negative views of the Democratic-controlled Congress don't seem to be helping the Republicans.

Likely voters are even more negative toward Congress than toward the president — 69 percent disapprove and 25 percent approve of Congress.

The attitudes are not partisan. By big majorities, Republicans, Democrats and independents say they do not like the way the Democratic-controlled Congress is doing its job.

But Greenberg says that those strong feelings do not seem to be leading voters to turn to Republicans.

"The more things play out in Washington, they find themselves leaning more and more to the Democrats," he says.

Not so fast, says Bolger. On the question of Congress, independents are siding with Republicans, he says.

"We lost the 2006 election because of independent voters," he says. "When you look at independents, they don't buy the argument that the Democrats are making. On this message they agree that it's time for a change, it's time to vote against the incumbents regardless of party."