Accessibility links
Iraqi Actors Train U.S. Soldiers for Conditions in Iraq Some 250 Iraqi-Americans have come to Ft. Irwin, Calif., to help U.S. troops adjust to working around Iraqi civilians. The actors work in fake Iraqi villages and play a variety of roles — from civilians to suicide bombers. 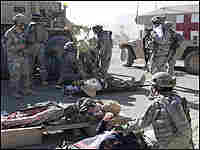 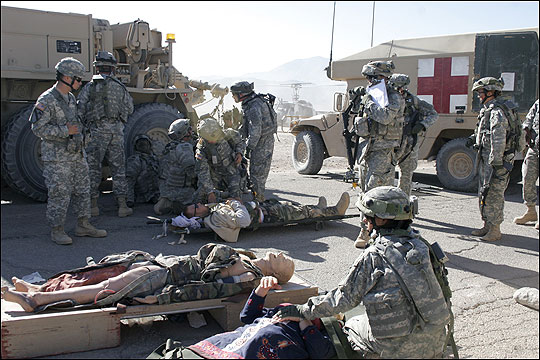 In a dusty desert village, U.S. soldiers walk down a street in full body armor, guns at the ready. Local residents in Arab dress sit in chairs along the sides of the street. They watch the Americans warily.

Suddenly, shots ring out, people scatter and chaos takes over. It sounds like a scene straight from the streets of Baghdad, but the shots are blanks. Even the village is fake — just a jumble of plywood shipping crates and sheds.

The men and women posing as villagers are all native-born Iraqis who now live in the United States. They play a variety of roles — from civilians to suicide bombers. They're among the 250 Iraqi-Americans who've come to Ft. Irwin, Calif. to help U.S. troops get used to working around Iraqi civilians.

Glenn Zorpette, executive editor of IEEE Spectrum magazine, spent three days on the base and came back with the story of an Iraqi-American woman who helps train U.S. soldiers. 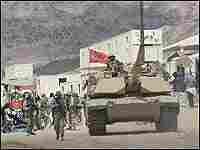 Marines patrol the marketplace in the fictional Iraqi town of Wadi al-Sahara. All of the role players are Iraqi-born. Armando Arorizo hide caption 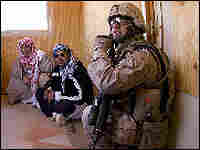 A Marine with Iraqi "villagers" during a gun battle in Wadi al-Sahara. Armando Arorizo hide caption 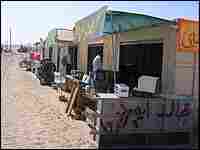 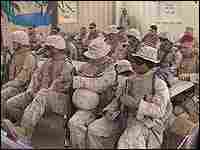 In the vast desert just outside Joshua Tree National Park, in southern California, stands the fictional Iraqi village of Wadi al-Sahara. Every Marine going to Iraq comes here first to participate in a new training mission called Operation Mojave Viper. It is the most extensive simulated-training exercise the U.S. military has to offer.

The most recent group to visit the village is the 3rd Battalion of the 7th Marine Regiment, known as 3-7. This battalion is preparing for its fourth deployment to Iraq. Many of the Marines in the unit are battle-hardened, but this time the training is less about combat and more about how to avoid it.

When a company of Marines arrives in Wadi al-Sahara just after dawn, the souk, or old marketplace, is already open for business. Clusters of men sip tea, as they hawk old refrigerators and tires out of disused shipping containers that have been fashioned into storefronts. The Marines have been instructed to move through the town as gently as possible.

This brand-new training regimen is shaped, in part, by feedback from Marines who served in Iraq, like Cpl. Michael Watts, 21, who has already done one tour there.

"The training has evolved so much," Watts explains. "When we were doing training like this, there never were any role players or anybody to simulate civilians, who are wondering what's going on and looking around and doing everyday things. So when we got there, and there were other people besides the enemy, it kind of threw us on our heels. You know, all we trained for was that the enemy are the only ones on the streets."

There are about 500 role players in the town of Wadi al-Sahara, all of them Iraqi.

Lt. Col. Andrew Kennedy is the counterinsurgency guru at the Marine Corp base in 29 Palms, Calif. He's a big man, fit, barrel-chested and usually chomping on an unlit cigar. His mantra goes something like this: "It's always better to capture than to kill and it's always better to turn than to capture."

Kennedy says if you kill an enemy, you get nothing. If you capture him, you might learn something. But if you win him over, turn him, get him to help you, you get a valuable spy.

Kennedy teaches this lesson in a classroom that is basically a large air-conditioned trailer in the middle of the California desert. His students are Marines on their way to Iraq — often for a second or third time. Kennedy now stresses how not to fight.

"There are going to be times when you need to take a deep breath and not go head to head, "he tells his students. "You need to foresee the opportunity for conflict, and avoid it."

Almost every day, Kennedy works the phone to Iraq. He is an obsessive reader of what are called 'after-action reports', written accounts of each and every mission, large or small, undertaken in Iraq.

"Everything we do here is a direct result of reports that come to us from people who are over there," he explains.

These days, Kennedy is focused on connections. He wants the young Marines who hear him out to think about one word when they're in Iraq: relationships.

"Part of what we try to do is make people aware that you have to have connections," he says. "And maybe there's a shopkeeper that you meet who you can talk a couple words to, and order chai at his place. And you do that a few weeks, a month, two months... This is someone you now have a relationship with, and he'll talk to you about some things."

On the other side of Wadi al-Sahara, a company of Marines listens intently to Ahmed el Adeb. He's a political refugee from Baghdad, and he now teaches small groups of Marines everything from language to cultural sensibility.

He offers simple but practical pointers: Don't use the F-word, especially if women are around. Most Iraqis know what it means. And when you meet a sheikh or tribal leader, look him in the eye.

It's part of training that lasts about a month. For the last two weeks, the Marines live, work and sleep on forward operating bases just outside the village of Wadi al-Sahara. It's a dusty camp almost identical to the place they'll call home for eight months in Anbar province.

The Command Operation Center at the base is a large tent with a half-dozen computers and some radio gear. A dry-erase board tallies the number of daily and weekly attacks in the area of operations.

When a report comes across that shots were fired, a platoon commander is ordered to find out who's shooting in the village. On a recent day, that job fell to Ryan Maloney, 23, a recent graduate of Boston University. Maloney goes outside to brief the 35 Marines under his command.

The platoon is divided into three squads. The first is led by Morgan Ballis, 20, from Tucson. He's already served one tour in Iraq. Ballis is barely old enough to shave, but he's more battle-hardened than many troops twice his age. He takes his squad out to investigate the shooting.

Ballis and the squad enter the outskirts of the village in an AMTRAK, an amphibious tractor that's used as a transport vehicle. The AMTRAK won't enter Wadi-al Sahara; that's too provocative. So the Marines dismount and walk into town on foot. Dismounted patrols are now the most common type carried out by Marines in sectors of Anbar province.

The squad locates a house where they believe a sniper is hidden. They go in and find two men. The men are searched, but the Marines find nothing.

It's a typical encounter the Marines will experience in Iraq, and they're trained to deal with mistakes as best they can. They apologize.

It's a lesson for Ballis, his squad and all the Marines of the 3-7. Being polite is now considered a force-protection priority by top Marine strategists. The fewer enemies you make, the fewer Marines get killed.