Hear NPR's David Greene on What's Next for Gore 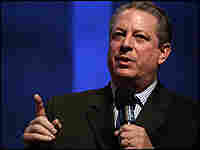 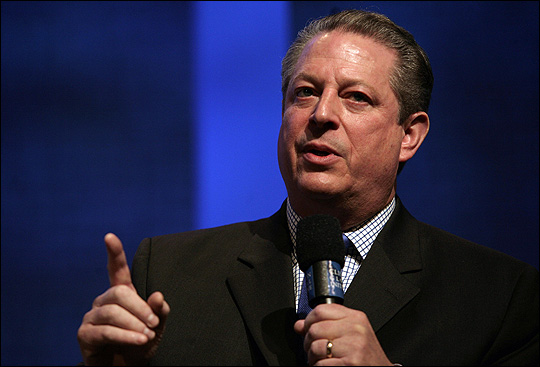 Al Gore, speaking at a New York event in September, has led the charge to combat global change.

Now that he has been awarded the Nobel Peace Prize, Al Gore joins an elite club, one that includes presidents, activists and holy men. It is also a club that is, by some accounts, cursed. Past winners have fallen into ill repute, been assassinated—or simply faded from public view. Read more about the "nobel curse." 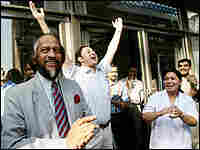 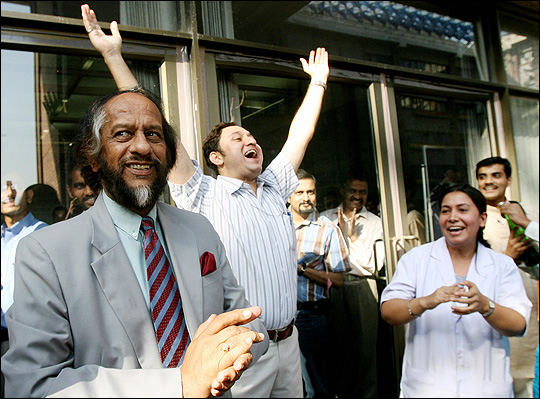 Rajendra Pachauri, chairman of the Intergovernmental Panel on Climate Change (IPCC), celebrates with students and office staff in New Delhi after winning the Nobel Peace Prize.

A History of Climate Change Activism

Gore has been sounding the alarm on climate change for decades. In 1989, for example, while still a U.S. senator representing Tennessee, Gore questioned President George H.W. Bush's commitment to environmental protection when he learned that the administration had tampered with testimony on global warming from a leading scientist.

Listen to a 1989 Report on the Controversy, from NPR's Cokie Roberts

Former Vice President Al Gore and the U.N.'s Intergovernmental Panel on Climate Change were awarded the 2007 Nobel Peace Prize Friday for their efforts to spread awareness of man-made climate change and lay the foundations for counteracting it.

"I am deeply honored to receive the Nobel Peace Prize," Gore said. "We face a true planetary emergency. The climate crisis is not a political issue, it is a moral and spiritual challenge to all of humanity."

Gore's film An Inconvenient Truth, a documentary on global warming, won an Academy Award this year and he had been widely expected to win the prize.

In awarding him the prize, the Nobel Committee citation said that Gore "is probably the single individual who has done most to create greater worldwide understanding of the measures that need to be adopted."

The U.N. Intergovernmental Panel on Climate Change is less well known. It's a global network of 2,000 scientists who have labored for years on reports and plans to counter global warming.

Ralph Cicerone, president of the National Academy of Sciences, said that the IPCC released its first report on the global environment in 1990, after being formed in the late '80s.

Since then, the group has published comprehensive reports every five years or so — its latest came out this year.

The IPCC is broken into three main groups, Cicerone said: one on the scientific basis of climate change; a second on the impact, adaptation and vulnerability of climate; and another on mitigation and adaptation to changes.

"And they also involve hundreds of scientists and reviewers from all around the world," Cicerone said.

In recent years, the Nobel Committee has broadened the interpretation of the concept of peacemaking. On Friday, it said global warming is creating greater competition for the Earth's resources, which it warned could lead to an increased danger of violent conflicts and wars.

Global warming, the committee said, "may induce large-scale migration," which could "place particularly heavy burdens on the world's most vulnerable countries."

Gore said he would donate his share of the $1.5 million that accompanies the prize to the Alliance for Climate Protection, a bipartisan nonprofit organization devoted to conveying the urgency of solving the climate crisis.

"His strong commitment, reflected in political activity, lectures, films and books, has strengthened the struggle against climate change," the Nobel citation said.

Gore supporters have been raising hundreds of thousands of dollars for petition drives and advertising in an effort to lure him into the Democratic presidential primaries.

NPR's Washington Editor Ron Elving said that winning the Nobel will do little to ease the calls for Gore to enter the 2008 race.

One group, Draftgore.com, ran a full-page open letter to Gore in Wednesday's New York Times, imploring him to get into the race.

Gore, 59, has said repeatedly that he's not running for the Democratic presidential nomination in 2008, without ever closing that door completely. But Gore isn't likely to make a late entry, Elving said.

Still, Elving said he believes that Gore has decided that he has one last chance for the presidency in his political future, "and he did not want to spend that one more good run at it running against Hillary Clinton," Elving said. "That would divide the Clinton base, the Clinton organization, the Clinton money sources. It didn't make sense."

Instead, Elving said, Gore will likely use his recent accolades as another tool to ensure that climate change is part of the conversation in the 2008 election campaign.

"I want this prize to have everyone ... every human being, asking what they should do," Mjoes said. "What he [Gore] decides to do from here is his personal decision."

The last American to win the prize or share it was former President Carter in 2002.

The Nobel Committee cited the Panel on Climate Change for two decades of scientific reports that have "created an ever-broader informed consensus about the connection between human activities and global warming."

Members of the panel were surprised that it was chosen to share the honor with Gore, a spokeswoman said.

"We would have been happy even if he had received it alone because it is a recognition of the importance of this issue," spokeswoman Carola Traverso Saibante said.

The panel forecasted this year that all regions of the world will be affected by climate warming and that a third of the Earth's species will vanish if global temperatures continue to rise until they are 3.6 degrees above the average temperature in the 1980s and '90s.

"Decisive action in the next decade can still avoid some of the most catastrophic scenarios the IPCC has forecast," said Yvo de Boer, the U.N.'s top climate official.

He urged consensus among the United States and other countries on attacking the problem.

Climate change has moved high on the international agenda this year. The U.N. climate panel has been releasing reports, talks on a replacement for the 1997 Kyoto Protocol on climate are set to resume and on Europe's northern fringe, where the awards committee works, there is growing concern about the melting Arctic.

Two of the past three prizes have been untraditional, with the 2004 award to Kenya environmentalist Wangari Maathai and last year's award to Bangladeshi economist Muhammad Yunus and his Grameen Bank, which makes to micro-loans to the country's poor.

Will Gore Fall Prey to the 'Nobel Curse'? 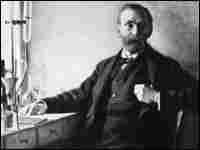 The Nobel Peace Prize was named after Swedish Chemist Alfred Nobel, a man who made his fortune by inventing dynamite — one of the many contradictions of the award. Hulton Archive/Getty Images hide caption

Now that he has been awarded the Nobel Peace Prize, Al Gore joins an elite club, one that includes presidents, activists and holy men. It is also a club that is, by some accounts, cursed. Past winners have fallen into ill repute, been assassinated — and simply faded from public view.

The Nobel Peace Prize was named after a man who made his fortune by inventing dynamite — one of the many contradictions of a prize, arguably the world's most coveted, that was first awarded in 1901.

Mikhail Gorbachev won the prize in 1990, just before the collapse of the country that he was trying to reform. Former U.N. Secretary-General Kofi Annan got the prize in 2001. Shortly afterward, the Iraq "oil-for-food" scandal erupted and Annan's reputation was tarnished, some say irrevocably. Myanmar's Aung San Suu Kyi was the laureate in 1991, and has barely been out of house arrest since.

South Koran leader Kim Dae-Jung won in 2000 for his efforts to hasten reconciliation with North Korea. Those efforts have since faltered. Egyptian president Anwar Sadat was awarded the prize in 1978 (along with Menachem Begin). The next year, he was assassinated. Israeli Prime Minister Yitzhak Rabin was also assassinated a year after being awarded the prize.

Even Mother Teresa, who won in 1979, has seen her saintly reputation take a hit lately. A recent book published private letters that revealed a woman who suffered long periods of religious doubt and spiritual emptiness.

And if Gore thinks winning the prize might bolster his political fortunes, he might stop to consider the case of David Trimble. The Northern Ireland leader was awarded the prize (along with John Hume) in 1998. His political career has since nose-dived. He lost a 2005 bid for re-election to the British Parliament and has been largely overshadowed by a rival politician, Ian Paisley.

"There seems to be some kind of curse on the Peace Prize, or at least on many of its recipients," concludes British commentator Martin Walker.

The Nobel Committee sometimes awards the prize to reward a lifetime of public service, as it did in 2002, with Jimmy Carter. But just as often, it has given the prize to an activist or politician embarking on a difficult mission, the outcome of which remains uncertain. In those cases, the prize is given as an incentive, not a reward.

That was certainly the case in 1994, when the prize went to Rabin, Yasser Arafat and Shimon Peres shortly after they signed the Oslo Peace Accord. Since then, the peace process between Israel and the Palestinians has collapsed. Does that mean the Nobel Committee was wrong to award the prize?

No, says Jon Alterman, a senior fellow with the Center for Strategic and International Studies. "The prize was meant to encourage a precarious process," he says. "And I don't think that's wrong. Sometimes it does achieve that, it does propel something forward."

Indeed, the prize is often awarded to people who are in the midst of monumental, quixotic struggles. The fact that they sometimes fall from grace says more about the heights they reached than it does about a "Nobel Curse."

And, of course, there are great leaders who never received the Peace Prize, yet also met a tragic demise. Mahatma Gandhi, passed over several times for the prize, was assassinated by a Hindu extremist in 1948.