Accessibility links
Finding the Strength to Fight Our Fears As a child growing up in the West Bank city of Ramallah, Terry Ahwal knew terror and violence. Now living in Detroit, she believes we should be fighting against fear and not against people.

Listen
Finding the Strength to Fight Our Fears 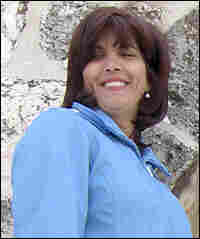 Terry Ahwal was born in the West Bank city of Ramallah, and now lives with her family near Detroit. She is development director for the Rehabilitation Institute of Michigan, and teaches classes in non-violent communication at Madonna University. Photo Courtesy of Terry Ahwal hide caption

I believe in fighting fear.

When I was 11 years old and living under the Israeli occupation, I took a chance and after curfew I ran to visit my grandmother who lived two blocks away from us. On the road, I had to hide under a truck to avoid soldiers who were coming my way. For 20 minutes I lay there in utter fear watching their boots walk back and forth in front of the truck. My heart was pounding so fast and loud that I was afraid one of the soldiers would hear it and I would be killed instantly.

To calm myself, I started begging God to take mercy on me and save me from these men and their guns. I remembered the words of my mother after Israeli soldiers beat my father. She told us to put our fear and anger aside and pray for the poor soldiers, who were also afraid because they were away from their homes in Israel.

I began to feel bad for the soldiers. I wondered: Where do they sleep and are they afraid of little children like me? What kind of food do they eat? Do they have big or small families? Their voices began to remind me of my neighbors. My fear dissipated a bit as I pictured the soldiers as people I knew. Although my 20 minutes under the truck seemed like an eternity, I believe that shedding my fear literally saved my life.

Thirty-six years later I look around and see another kind of devastation created by fear. I saw the collapse of my city, Detroit, when so many white people fled the city out of fear. After Sept. 11, the Arab and Muslim community segregated themselves because of the level of suspicion directed at them from others. Fear of association because of ethnicity led many to retreat within themselves and their community. They stopped socializing with non-Arab/Muslim colleagues and neighbors. Once again, we allow differences to separate us because of fear.

When I was hiding under that truck, if my terror had made me lose control and I had started to cry, the jittery soldiers might have pulled the trigger because of their own fears. Thank God I lived to wonder about this. I understood as a child that fear can be deadly.

I believe it is fear we should be fighting not the "other." We all belong to the same human tribe; that kinship supersedes our differences. We are all soldiers patrolling the road, and we're all little children hiding under the truck.