Accessibility links
Jazz Singer And Pianist Blossom Dearie Dearie has been called "one of the last of the great supper-club singers." In an interview with Terry Gross from 1998, Dearie discusses her process of learning and performing songs, her trademark voice and her techniques for reinventing songs. 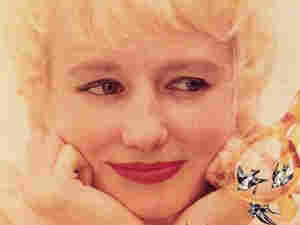 Blossom Dearie, from the cover of her album Once Upon a Summertime. hide caption 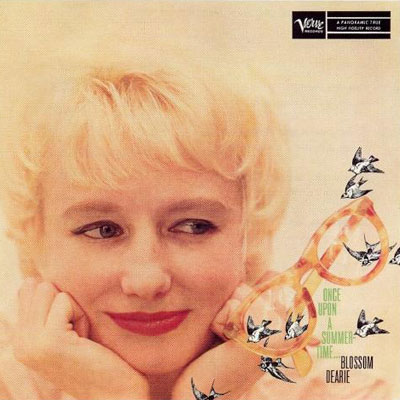 Blossom Dearie, from the cover of her album Once Upon a Summertime.

Back in 1974, New Yorker jazz critic Whitney Balliet placed Blossom Dearie alongside Bobby Short and Mabel Mercer as part of the consummate triumvirate of supper-club singers who rule the upper regions of American popular song.

A great singer with the tiniest of voices, Dearie says that voice coaches have called her trademark sound the result of improper breathing.

"It's very funny to have worked and sung for so many years, and then someone tells you, 'Well, you're not breathing properly.' Also, I do turn to the side, to the right, when I sing [at the piano], and they say that that constricts the vocal cords."

Professionals worry about Dearie's technique and encourage her to sing correctly, from her diaphragm, but she doesn't have any plans to change her technique.

"I think that would probably make my voice more powerful, but at this age, I don't think I'm going to worry about it," she says. "I have never been a singer who could stand up and sing like a theatrical singer. I sit down, and I've always used a microphone. I have a kind of microphone technique."

Because Dearie plays the piano and sings, her process of learning songs can be very complex. Rather than starting with sheet music, Dearie says that her first step is to learn to play the song on the piano. Then she begins to study the lyrics, which she hides on her piano, even while performing.

"You know, the piano part is just about all I can handle for the beginning of the song," she says. "Then I sort of refer to the lyrics now and then. I don't want them shown. It doesn't look very nice, I don't think."

Dearie says that song lyrics are easier for her to memorize when they tell a story.

"It depends on the lyrics," Dearie says. "If there's a story involved, it's easier to memorize the lyrics than just impressions and things. Like 'Peel Me a Grape.' Well, I guess it took me a long time to learn that because there's no story; there's no continuity. I mean, it's just one thing after another. A love song is easier to memorize."