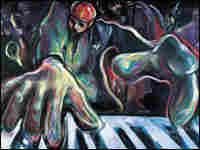 The flyer from the competition. hide caption 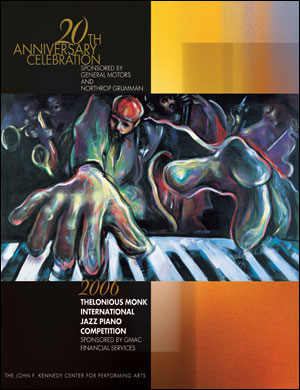 The flyer from the competition.

Half a century ago, before there was jazz education, the Manhattan apartment of pianist and composer Thelonious Monk was more than home to him and his family. It was an all-day and all-night salon for young players and proteges. After his death in 1982, to continue the education and fellowship, the Thelonious Monk Institute of Jazz was born, offering opportunities to promising musicians. The first Monk International Piano Competition took place 20 years ago, and the institute has looked forward ever since.

This week, we're celebrating at the Monk Institute 20th Anniversary Concert at the Kennedy Center. First, we hear two songs from the Piano Competition finals. Runner-up Gerald Clayton from Los Angeles plays a solo "Django" by John Lewis, wrapped in phrases of the "Moonlight Sonata" by Beethoven. Tigran Himasyan from Armenia plays "Cherokee," and wins the $20,000 first prize.

Then stars come out for a birthday party. Stevie Wonder receives the Maria Fisher Award, named for the Washington, D.C., classical music philanthropist who helped to found the Monk Institute. Herbie Hancock and Wayne Shorter improvise a duet to thank President Tom Carter, indefatigable in the growth of all the institute programs. An all-star band plays a triumphant "Four in One" by Thelonious himself. And more. Party with us!