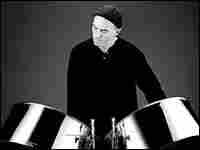 For a JazzSet with built-in sunshine, tune in for Andy Narell and the steel pan orchestra Calypsociation from Paris, at the 2005 Portland Jazz Festival in Oregon.

Decades ago in the Caribbean, ingenious workers hammered paint can covers and oil drum heads into musical instruments. Along with the calypso, the steel pan band became the sound of Trinidad. What started on an island now resounds worldwide, and in recent years, Narell has become a world-traveling Pied Piper of the pan.

This concert was a year in the making. The Portland Festival's Director Bill Royston envisioned Narell and Calypsociation playing in McMenamin's Crystal Ballroom, a grand old dance hall on the edge of downtown. The stage became a sea of silver — bass, cello, tenor and "double second" pans — surrounding a percussion section (the "engine room") that includes a good-sized brake drum, an Afro-Cuban chekere and more. And there are no music stands! Like a choreographer teaching a dance to his troupe, Andy teaches the parts measure for measure to the players in his orchestra.

The Calypsociation orchestra members were Narell's students, many in the U.S. for the first time. They stirred up colorful, shimmering sounds with amazing heart. You can feel the physical work that produces these percussive melodies. Jacques Schwartzbart is special guest on saxophone.

JazzSet thanks the Heads Up label for its support, Dave Love and Jason Linder, and the Portland Jazz Festival, Bill Royston and Sarah Bailen Smith. Also JazzSet affiliate KMHD, 89.1, "for the love of jazz and blues," General Manager Doug Sweet, and Darrell Grant and his fellow faculty at the Portland State University jazz program.

Yujin Cha archived the 1980 Andy Narell interview; her work is supported by a grant from the Grammy Foundation.