Accessibility links
Dalai Lama Draws Strong Reactions on Both Sides While the Dalai Lama is widely admired for advocating peace and nonviolence, he is sometimes reviled for his willingness to accept that Tibet should remain tied to China. 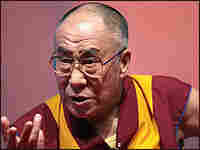 The Dalai Lama's visit to the United States has created some controversy, as China is angered by the U.S. decision to award the Tibetan religious leader the Congressional Gold Medal of Honor. Volker Hartmann/AFP/Getty Images hide caption

The man U.S. lawmakers have chosen to receive the Congressional Gold Medal is as complex as the problem he has spent most of his life trying to resolve – the relationship of China to his homeland, Tibet.

And while he's widely admired for advocating peace and nonviolence, the 14th Dalai Lama is sometimes reviled for his willingness to accept that Tibet should remain tied to China. He has described himself as "half Marxist, half Buddhist."

Tenzin Gyatso was born in an isolated semi-feudal theocracy, in which many people were still serfs on the land belonging to monasteries and big landowners.

In 1937, when he was two years old, the boy was identified by a search party of monks as the reincarnation of the 13th Dalai Lama. The story is that the child chose some of his predecessor's possessions from a pile of other objects and proclaimed them to be "mine." Tenzin came from a family of well-to-do farmers, and his elder brother had already been named as the reincarnation of another important religious figure.

The boy was taken from his family to be reared by monks in Lhasa, the religious center of Tibetan Buddhism, but his education wasn't entirely religious. When he was 11, he met the Austrian mountaineer Heinrich Harrer, a former Nazi storm trooper who had taken refuge in Tibet after escaping from a British prison camp in India. Harrer became one of the young Dalai Lama's tutors, teaching him about the outside world. Harrer later recounted his story in the book Seven Years in Tibet.

In 1950, the 15-year-old Tenzin was formally enthroned as the Tibetan head of state, but his domain was already crumbling. Just a month earlier, an army from the Peoples' Republic of China had invaded eastern Tibet. Within a short time, the Chinese had occupied enough territory to force the Dalai Lama's government to negotiate. In 1951, the Tibetans signed a 17-point agreement that acknowledged Tibet to be part of China, but which also promised that the country's government wouldn't be changed — and that Tibet would be able to exercise autonomy.

Tibetans later charged that China had reneged on the agreement by attempting to assimilate Tibet into the communist system.

In 1959, after a failed Tibetan uprising against the Chinese, the Dalai Lama and tens of thousands of his followers fled Tibet to Dharamsala, India, where they established a government in exile. Nearly 40 years later, the exile administration acknowledged that it had received $1.7 million a year in funding from the American CIA during the 1960s.

The funding was part of the CIA's secret program to undermine communist governments, especially in China and the former Soviet Union. A yearly subsidy of $180,000 was earmarked for the Dalai Lama, but his government denied that he ever personally benefited from the money. The United States cut support for the Tibetans in the early 1970s, and later normalized relations with the Peoples' Republic of China.

During his exile, the Dalai Lama has traveled extensively, campaigning for international support for his vision of a democratic, autonomous Tibet "in association with" China.

He gained enormous popularity in the West, where he is credited with helping the spread of Buddhism and working for understanding with leaders of other faiths. He also attracted a following among Hollywood celebrities, including actor Richard Gere and action-movie star Steven Seagal.

The Dalai Lama has been honored for his commitment to human rights and nonviolence, most notably with the Nobel Peace Prize in 1989. The prize was seen by many as a rebuke to China, which had massacred student protestors in Tiananmen Square that year, and the Dalai Lama criticized Chinese leaders in his acceptance speech.

Critics such as writer Christopher Hitchens have drawn attention to positions taken by the Dalai Lama that are less popular in the West, including his support for nuclear testing by India and his prohibition on the worship of a local, non-Buddhist deity in Tibet. Hitchens also cites the Dalai Lama's one-time association with Shoko Asahara, the leader of a Japanese religious cult that spread poisonous nerve gas in the Tokyo subway system.

Hitchens alleges that the Dalai Lama was influenced by a large donation from Asahara's group.

The 72-year-old Buddhist leader has spoken recently of "retiring" from his political activities, in part by giving more responsibility to the Tibetan parliament-in-exile. A spokesman said he will transfer his political duties "over a period of time." The spokesman added that the Dalai Lama "will inevitably continue to be a spiritual leader."