Accessibility links
Experimental School Gets Rid of Classes, Teachers Minnesota New Country School is not your typical high school. There are no classes, no teachers and no walls. Students work on projects at their own computers. The experiment seems to be working: The school sends 90 percent of its graduates to college.

Questions & Comments: Do you have a high school in your community that is trying something new? Let us know – e-mail NPR's education desk. 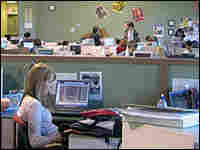 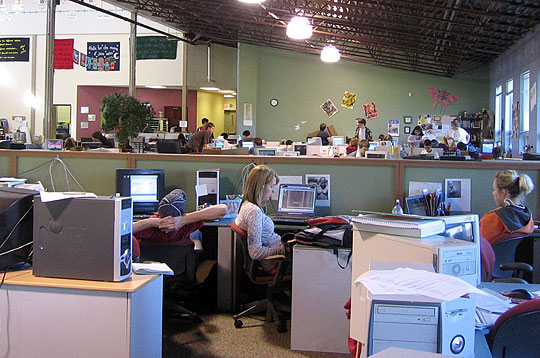 New Country students sit in an open environment that looks a lot like a typical office. 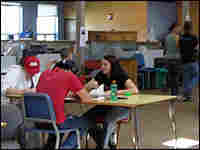 Students and staff meet at tables set out in the school's atrium to critique presentations on their projects. Student work is focused on honing individual projects. Larry Abramson, NPR hide caption 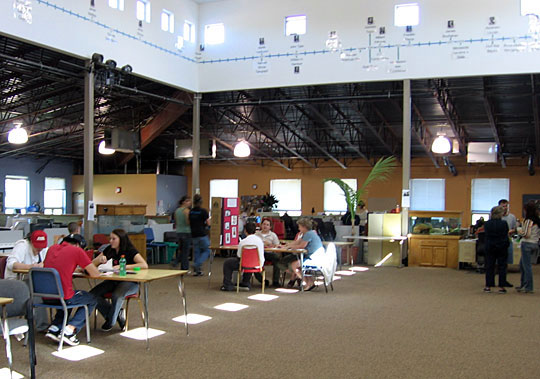 Students and staff meet at tables set out in the school's atrium to critique presentations on their projects. Student work is focused on honing individual projects.

Enter a typical high school, and the first thing you see is the front office. It's the "belly button" of the school, the place where the principal dwells, where grades are stored and where visitors must sign in.

The front office also reinforces familiar hierarchy: principal at the top, teachers in the middle, kids on the bottom, sitting with hands folded at their desks.

Now, imagine a school where the organizational structure is completely flat. At the New Country School in Henderson, Minn., there is no front office. Visitors are immediately embraced by an airy atrium that is the centerpiece of this one-room schoolhouse.

And all around the room, New Country's 124 students sit at desks — real office desks — working at their own personal computers.

The feeling is comfortable. There is a hum of constant conversation, none of the screaming and yelling heard in a traditional school. Kids are free to move about the school, so there's no need for hall passes or for teachers to patrol the hall. And there's no need to send kids to the office.

New Country, a charter school, is the biggest institution in the small town of Henderson (pop. 910), about an hour southwest of Minneapolis. It's not the kind of place you expect to see radical experiments.

A Break from the Past

When Dee Thomas and her colleagues got together 15 years ago to design a new high school, they knew there was one thing that had to go: The bell. Thomas said that everyone agreed that the constant interruption of classes caused huge amounts of strain. Moreover, it's just not natural, Thomas said.

"You don't go into your job in the morning and say, 'OK, for the first 42 minutes of my job, I'm going to do the math part.' And then a buzzer goes off, and you do the social history part of your job. You don't do that," Thomas said.

Students spend most of their day in front of their computers, working on interdisciplinary projects. If they're working on a history project, they have to do enough writing to fulfill the state curriculum requirements. If they don't fulfill the requirements, they have to do another project. They also have to take the same standardized tests as other students statewide.

Many students say that compared to the traditional schools they came from, New Country is a breath of fresh air. Bernie Nichols, a junior, said that at his old school, he kept getting lost. He hated sitting still all day, being forced to pay attention as teachers lectured.

New Country brings out the best in students, Nichols said.

"I hated writing. Well, apparently I can write a very good story, because I made a couple of the advisors tear [up]," Nichols said.

Other students are here to escape a world of pain at traditional schools. Many said they were teased mercilessly by their classmates. One mother says her son would stay in the car and beg his mother not to make him go in.

When she told him he needed to be in school to learn, he said he'd have to spend the day enduring taunts from other students.

The school gives loners, like a boy named Alex, the freedom to work on their own. Alex sits at his computer most of the day, taking occasional breaks to read a book or to do math.

Alex said he knows what he wants to do when he grows up, but he's embarrassed to say. When pressed, he says he wants to be a hospice worker.

"Surprisingly, I found it when I was surfing the Internet on one of those days when you were supposed to be doing an evaluation quiz," Alex said.

Every few weeks, students must present projects they've been working on to the rest of the school community. To prepare for their presentations, they gather at tables in the middle of the school atrium and submit their work to their "advisers."

There are no teachers at New Country. Adults are viewed as guides to learning.

Dee Thomas listens as a student defends the credit she thinks she deserves for the work she's done on a project. Thomas is disappointed that the student hasn't carefully logged the time she invested in the project. The student concedes that was a mistake. But in the course of the critique, advisers agree that the student has learned how to get along with other students, and has made important progress in non-academic areas. She gets the credit she wanted.

Kids at New Country test better than their peers on the state tests and on the pre-college ACT. Special education students at New Country are able to pass the same tests everyone else takes. The school sends 90 percent of its graduates to college.

But that doesn't tell the whole story. New Country struggles to keep its seniors from leaving. The school's senior project is demanding — 300 hours of work. Many students choose to do their senior year at a traditional school, rather than invest the time and energy required for the senior project.

As with many charter schools, there's some tension with the surrounding district. The U.S. Department of Education singled out New Country for its high test scores. But local administrators say you can't compare the performance of students at a small charter with a sprawling school district serving 1,300 students in the surrounding Le Sueur-Henderson school district. They say they admire what New Country is doing, but say the comparison just isn't fair.

Staff and students concede New Country's open structure is not for everybody. The school building can get pretty noisy at times, which students with attention problems say can be challenge.

And there's also concern about math education. Right now, math is the only class that is taught as a separate subject. Students advance at their own pace through lessons. That means that on a given day, each student may be at a different math level. The school admits it does not have enough advisers to cover all those different ability levels.

But for some students, New Country offers a rare alternative, a choice they can't find anywhere else. And the school is constantly visited by educators from around the world looking for new ideas. That's the foundation of efforts to reform American high schools today — that there's a need to experiment with an institution that is failing millions of students.