Christian McBride Band at the Kennedy Center on JazzSet

Christian McBride Band at the Kennedy Center on JazzSet 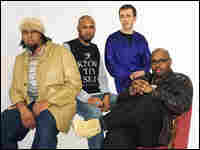 Bassist Christian McBride brings strength to every situation. On September 6, 2006, at the Hollywood Bowl, McBride conducted his hero and the Godfather of Soul, James Brown (1933-2006) and an 18-piece big band in a concert version of a long-out-of-print album, Soul on Top. One month later, Christian put together a tribute to his mentor, bassist Ray Brown, at the Blue Note in New York. Dee Dee Bridgewater was special guest. And this month, he's at Newport with Bruce Hornsby, on the West Coast with Hornsby and with Christian's own band, and on JazzSet.

Immersed in music and sports in his hometown of Philadelphia, young Christian had made a brief stab at the trombone and was playing the electric bass as well as loads of football, and rooting for Dr. J and the Philadelphia 76ers. Then a sharp-eared music teacher steered McBride to the acoustic bass. He studied at the Settlement Music School and the High School for the Creative and Performing Arts (he was a "CAPA Kid"), where hip-hop and neo-soul were already the cutting edge. Soon, Wynton Marsalis came through town, heard McBride, and took him under his jazz wing.

In 1993, JazzSet featured newcomer McBride in a concert from the Boston Globe Festival. His bandmates were Joshua Redman on sax and Geoff Keezer on piano — no drums. It's still a great set!

Off the bandstand, McBride is the Creative Chair for Jazz with the Los Angeles Philharmonic, programming four concerts a year at the Walt Disney Concert Hall. He is Co-Director with tenor saxophonist Loren Schoenberg of the Jazz Museum in Harlem, raising money for a new building. He's in charge of the Jazz Academy at Aspen/Snowmass, coaching lucky young bands in the mountains in the summer. And he teaches there. He's powerful in the classroom, sharing his knowledge and tracks from his vast collection of jazz, soul and fusion from 1970s. He teaches from his iPod.

The McBride Band has been together since the year 2000. Their new album is Live at Tonic from Rope-a-dope. It's a triple-CD set that documents three nights with this band and special guests at Tonic on the Lower East Side of Manhattan.

Thanks to Dr. Billy Taylor, Artistic Advisor for Jazz, Manager Kevin Struthers, and the team at the Kennedy Center; also Greg Hartman and Chris Weal of Big Mo Recording.