Accessibility links
Far-Right German Party Tries to Remake Its Image With its anti-foreigner line, Germany's National Democratic Party has drawn criticism. Now, the party is trying to change its image, portraying its members as victims of intolerance. 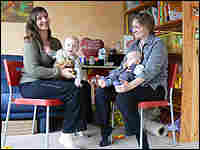 The local newspaper ran this photo of Stella Palau (left) while she was attending an event at a parent-child co-op. A journalist who tracks the far-right recognized her, and alerted the center. Courtesy of Oranienburger Generalanzeiger/Gorzolka hide caption 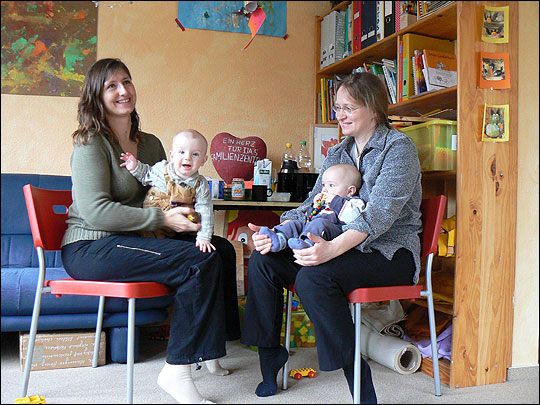 The local newspaper ran this photo of Stella Palau (left) while she was attending an event at a parent-child co-op. A journalist who tracks the far-right recognized her, and alerted the center.

Susanne Mosch (right) and her colleague Nicole Florczak said they feel betrayed that Palau spent a year at the center without mentioning she was a member of an extreme-right political party. Khue Pham, for NPR hide caption 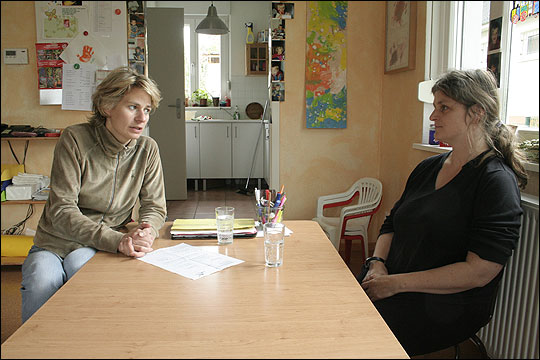 Susanne Mosch (right) and her colleague Nicole Florczak said they feel betrayed that Palau spent a year at the center without mentioning she was a member of an extreme-right political party. 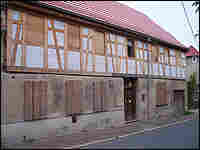 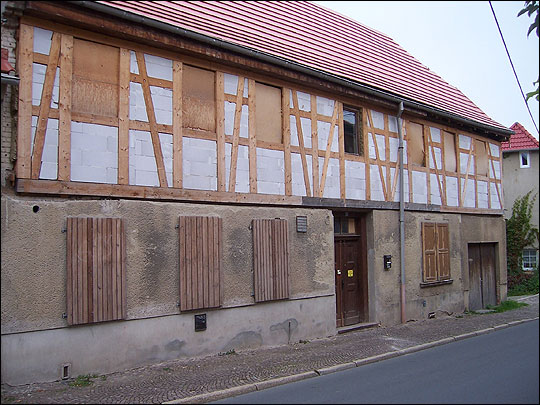 This far-right center in Jena, Germany, is known locally as the "Brown House" – the same name Hitler's Nazi Party headquarters in Munich had.

In most European countries, far-right parties are an accepted part of the political landscape.

Because of its Nazi history, Germany is different. The German government has tried in the past to ban the right-wing National Democratic Party, known as the NPD.

The NPD is controversial in Germany because it takes a hard anti-foreigner line and says it wants to preserve German culture. Although some active party members admit recruiting from extreme organizations, the NPD officially plays down suspected ties to groups that work to overthrow the government or violent groups that beat up foreigners.

They also are aware that it's a problem for their image. The group is now trying to make over its image — even portraying its members as victims of intolerance.

The way Stella Palau sees it, she was unfairly kicked out of a parent-child co-op because of her political beliefs. Palau is a leading member of the NPD's executive committee, but for about a year, no one at the co-op knew that.

"The first thing was a phone call from one of the mothers who said they were really disappointed and didn't want to see me there anymore," Palau says. "I understood because they have a completely wrong image of us."

Palau chats with her daughter and cuddles her 18-month-old son on a park bench at a playground. She told her nearly 4-year-old girl that the children's center has closed. Palau says she didn't try to talk politics with the other moms at the co-op, but she stuck to topics like children's health and nutrition.

Susanne Mosch runs the co-op. She had never met a member of the NPD until Palau brought her daughter in.

"Just like the other mothers, she sat here with us, sang songs with us," Mosch says. "We talked a lot. She was a completely normal mother."

And Mosch was shocked to learn that Palau was a proponent of what Mosch considers dangerous, extreme views. Now Mosch feels abused.

"Of course, no one is here to express their political beliefs, but she intentionally kept back a lot of things," Mosch says.

Academics and officials who study the far right say the NPD is now trying new tactics, organizing volunteer fire brigades in small towns, or putting on children's festivals — anything to be seen as more mainstream. They're up against people like Alexander Froelich, a journalist who specializes in tracking the far right.

"The NPD is just a party," Froelich says, "but it represents a scene in Germany — a radical, violent scene."

Froelich informed the co-op staff that Palau was a leading member of the NPD after seeing her picture in the paper at a co-op event. Even though Palau has no record of criminal activity and belongs to a legal political party, Froelich believes he was right to warn the public.

"I have been the judge, but that's why the press is there," Froelich says. "I'm just based on constitution. And for me the NPD is an enemy. They don't want this constitution."

Palau says she's being tarred with too wide a brush.

"My personal opinion is not being heard; it's generalized," Palau says. "In Germany, everything we call right-wing, or nationalist, is bad. And there's no gradation, no differentiation."

She will not say that she has been discriminated against. But the perception is powerful among far-right sympathizers that Germany's World War II guilt is stifling certain views. Using the anonymity of online chat rooms, they say the Web is the only space where they can voice their opinions without alienating neighbors or losing customers. NPD official Patrick Wieschke says this sense of victimhood helps unite the party.

"The pressure of persecution against the NPD really strengthens the cohesion of party members," Wieschke says. "Because of the fight against us, there's more camaraderie in our group than in other parties."

Germany has long banned certain slogans and symbols associated with Hitler. At the same time, far-right groups have the constitutional right to gather and demonstrate. They are almost always protected by the police.

Responding to the Party's Presence

There was a police presence at last month's Jena Festival, a European nationalist festival in the eastern German town of Jena. Among thousands of counter-demonstrators was mayoral chief of staff Mattias Bettenhaeuser. He says people should confront the NPD on the street and at the ballot box, not try to restrict their speech.

"A democracy, if it's a strong democracy, they should be able to live with these opinions," Bettenhaeuser says. "Like we have in France, for instance, or in the U.S.A. In Germany, I think the German democracy is strong enough, but the laws are as they are at the moment."

Other opponents of the NPD aren't ready to go that far. They say the country where Adolf Hitler took power legally, nearly 75 years ago, still needs certain restrictions. 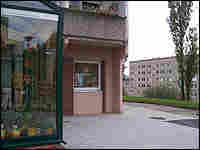 This is the corner where Noora, a teenager from a Kurdish refugee family, was beat up by a known extremist in her neighborhood. Her family apartment is two stories above the flower shop. Khue Pham, for NPR hide caption 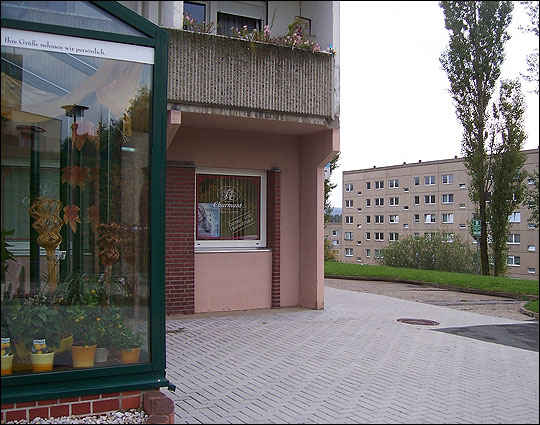 This is the corner where Noora, a teenager from a Kurdish refugee family, was beat up by a known extremist in her neighborhood. Her family apartment is two stories above the flower shop.

Germany's far right political party, the National Democratic Party (NPD), says even the most avid promoters of tolerance in Germany are intolerant of NPD views.

Right wingers complain in anonymous Web chat rooms that German laws banning certain Nazi phrases and symbols stifle their freedom of speech. Some NPD opponents acknowledge an element of truth to those complaints but few would call members of the NPD victims.

That's in part because of murky ties between the NPD and violent right wing groups or individuals who seem to make a sport of beating up foreigners.

Take Noora, a sixteen-year-old girl whose Kurdish family sought asylum from Iraq 10 years ago. She lives with her parents and four siblings in a worn, Communist-era apartment building in Beierfeld, a small town close to Germany's eastern border. The family did not give its last name because they were afraid of publicizing their situation.

Noora has dark hair, bright eyes, and an air of determined confidence. Her mother is more worn. Sitting next to each other on an overstuffed couch, Noora starts the story.

In August, Noora and her mother were beaten up by a neighbor. As Noora tells it, she and a friend, an immigrant from Kosovo, were playing outside just below Noora's apartment. A few young men yelled insults at them and an older woman told the boys to go make the girls shut up.

A male neighbor, who Noora knows and has had trouble with before, started kicking her. Her mother heard her calling for help and ran outside.

"I saw a tall young man and my daughter's head going 'boom, boom, boom' on the ground," Noora's mother Aisha says. "I was screaming. I wanted to get him away from my child. He said, 'Don't touch me. I'll kill you.'"

Aisha says she heard another woman tell the young man to leave the girls alone. Then "suddenly, very fast, I couldn't see," she says. The young man had landed his fist, armed with a ring, right in her eye.

Noora says it was the worst, but not the first time she's been harassed by her neighbor.

"They've been doing it as long as we've been here, doing it for a long time," she says, emphasizing the word long. "I know him. He lives here."

Social workers who track right extremist incidents say this situation is not unusual. The young man is known to police as a troublemaker, but Noora and Aisha aren't confident that the police are on their side.

Much more attention goes to high profile incidents, like when a drunken mob beat up eight men from India in a small eastern Germany town recently. Experts on the far right say alcohol is a crucial ingredient in those situations.

Noora and her siblings have learned to rarely go outside without their parents, certainly not alone. They cannot move from Beierfeld without permission from the immigration authorities. Noora says she hears nasty comments about foreigners frequently at school, but she just lets the insults roll off her back.

Her mother hadn't expected this when her family fled Iraq.

"We thought in Europe [that] things would be more humane," Aisha says. "We haven't found this in Germany."