Accessibility links
Mukasey Vows Independence from White House Attorney General nominee Michael Mukasey tells a Senate panel that, if confirmed, he would keep partisan politics out of the Justice Department. He also denounced a 2002 memo in which the department appears to condone torture. 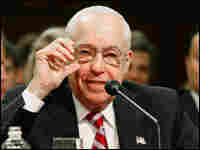 Read past comments from the attorney general nominee:

On the Jose Padilla Case

"Perhaps the world's greatest deliberative body (the Senate) and the people's house (the House of Representatives) could, while we still have the leisure, turn their considerable talents to deliberating how to fix a strained and mismatched legal system, before another cataclysm calls forth from the people demands for hastier and harsher results."— Wall Street Journal Aug. 22, 2007


On The Patriot Act

"I think most people would have been surprised and somewhat dismayed to learn that before the Patriot Act was passed, an FBI agent could apply to a court for a roving wiretap if a drug dealer switched cell phones, as they often do, but not if an identified agent of a foreign terrorist organization did; and could apply for a wiretap to investigate illegal sports betting, but not to investigate a potentially catastrophic computer hacking attack, the killing of U.S. nationals abroad, or the giving of material support to a terrorist organization." — Wall Street Journal May 10, 2004

On Legal Rights of Foreigners in U.S. Custody

Khalid Sheikh Mohammed, the mastermind of the 9/11 attacks, is said to have told his American captors that he wanted a lawyer and would see them in court. If the Supreme Court rules...that foreigners in U.S. custody enjoy the protection of our Constitution regardless of the place or circumstances of their apprehension, this bold joke could become a reality. — Wall Street Journal Aug. 22, 2007

The career of Michael Mukasey, President Bush's pick to succeed Alberto Gonzales as attorney general, is inextricably tied to national security. Read a profile of the judge.

Attorney General-designate Michael Mukasey promised lawmakers on Wednesday that, if confirmed, he would follow the rule of law and take partisan politics out of Justice Department decision-making. At the end of Mukasey's first day of confirmation hearings before the Senate Judiciary Committee, most senators appeared pleased with his answers.

The former judge was grilled extensively about how he would fix many of the problems that have been linked to the last attorney general, Alberto Gonzales, who was accused of following a White House political agenda.

Mukasey promised to be a more independent attorney general and to work closely with Congress. He said he would resign if the president ignored his advice and took an action that Mukasey believed to be unconstitutional.

When asked by New York Democrat Charles Schumer whether he would have the courage "to look squarely in the eyes of the president of the United States and tell him 'no,' if that is your best moral and legal judgment," Mukasey replied with a simple "yes."

Still, the nominee was noncommittal when it came to questions concerning the administration's policies on interrogating terrorism suspects and surveillance of terrorism-related communications.

"I am certainly going to examine the underlying memos and the underlying facts," Mukasey said in response to a question from Committee Chairman Patrick Leahy (D-VT) regarding apparent Justice Department approval of harsh interrogation tactics such as simulated drownings.

Mukasey told lawmakers that he had yet to see classified information and memos related to the interrogation methods. "So I can't say that there's something that's out of line with the law in those programs until I see the programs, and see the memos, and see whether they are in alignment or not," he said.

Distancing Himself from Some Gonzales Policies

Mukasey did criticize a 2002 Justice Department memo that said President Bush had authority as commander in chief to override domestic and international laws prohibiting torture. Mukasey called the memo "worse than a sin." He said, "It was a mistake. It was unnecessary."

When asked by Wisconsin Democrat Herbert Kohl whether he would recommend the shutdown of the detention facility at Guantanamo Bay, Mukasey was more circumspect. "I can't simply say we have to close Guantanamo, because obviously the question then arises what we do with the people who are there. And there is now no easy solution to that."

He said he believes prisoners at Guantanamo are being treated humanely but said their prolonged detention has "given us a black eye."

Several senators told Mukasey that they expected him to rebuild public confidence in the Justice Department and to exert independence from the White House.

"There's a good reason why the rule of law requires that we have an attorney general and not merely a secretary of the Department of Justice," Leahy said. "This is a different kind of Cabinet position. It's distinct from all others. It requires greater independence."

Mukasey said partisan politics plays no part in the bringing of charges or the timing of charges. He also said that, if he's confirmed, only a few top Justice officials would be authorized to take calls from political figures.

Under Gonzales, a number of lower-level officials fielded calls from politicians about particular cases and the work of several U.S. attorneys, who were later fired.

"Legal decisions and the progress of cases are decided by facts and law, not by interests and motives," Mukasey told the committee. "So, too, the Justice Department's mission includes advising the other departments and agencies of government, including the president, on what choices they are free to make and what limits they face. Here, too, the governing standard is what the Constitution and the law permit and require."

There seemed to be little question that lawmakers consider Mukasey qualifed to head the Justice Department. But several noted that the agency is suffering from low morale, and one of his major tasks in the last 14 months of the Bush administration would be to restore the department's credibility.

Mukasey has decades of experience as a federal judge, but most of it has been amassed outside of Washington — and that appears to be working in his favor. He has not been tainted by Washington politics, but neither is he a neophyte outsider.

During the course of his career, Mukasey has ruled on hundreds of cases, many having to do with national security. One such case was that of Jose Padilla, the so-called "dirty bomber," who was arrested on charges that he was plotting to detonate a radioactive bomb in the U.S. He was later convicted of separate terrorism charges in Miami.

In May 2002, Mukasey approved Padilla's arrest on a material witness warrant as part of the government's investigation of al-Qaida. He later questioned that decision. "The material witness statute has its perils," Mukasey wrote in the Aug. 22 edition of The Wall Street Journal.

He called on Congress to "fix a strained and mismatched legal system, before another cataclysm calls forth from the people demands for hastier and harsher results."

In the days following the Sept. 11 attacks, Mukasey approved secret warrants allowing government roundups of Muslims. Some civil-liberties groups question whether that was appropriate. They are expected to have a chance to testify Thursday.

With additional reporting by Eric Weiner.