Accessibility links
Ann Romney: See the Man, Not the Mormon Ann Romney, wife of GOP presidential candidate and former Massachusetts governor Mitt Romney, says that voters should not expect him to be a "pastor-in-chief" if elected. Mitt Romney wants to talk about running for president, not about his faith, she says.

Listen
Ann Romney: See the Man, Not the Mormon 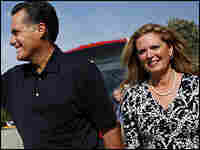 Ann Romney says that any concern or fear voters have about her husband's Mormon faith disappear after they get to know him. Eric Thayer/Getty hide caption 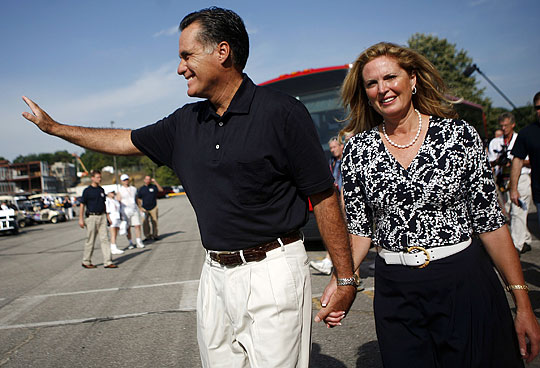 Ann Romney says that any concern or fear voters have about her husband's Mormon faith disappear after they get to know him.

Ann Romney has multiple sclerosis. She also has an active role in her husband Mitt's presidential campaign. Both require work.

She developed MS in 1998, and although she is now in full remission, she keeps a lighter schedule to keep the disease at bay. There are no late nights and she takes frequent trips home to ride her show horse, Baron.

She also tries to eat right, which isn't always easy on the campaign trail. She works to maintain a very strict diet, though she says she did sample a deep-fried treat while campaigning with her husband. Her granola, fresh berries and steamed broccoli are not standard campaign trail fare.

"It's a lot of effort, but it's very, very important that I eat healthy," Romney said. Her therapies also include acupuncture treatments and reflexology.

Despite her MS, Ann and Mitt Romney have taken a position on federally funded stem cell research that runs counter to that endorsed by the National Multiple Sclerosis Society. The MS Society believes that in searching for an MS cure, research should include embryonic stem cells.

Ann Romney said that while she and her husband are "absolutely" in favor of stem cell research, they oppose creating new life for experimental purposes.

"There are lots of forms of stem-cell research that don't do that," she said.

A Question of Faith

Whether it's on her MySpace profile, her campaign blog or her Web site — which includes a section of her favorite family recipes — Romney works to underscore her husband's family-values message. The Romneys have five sons, eight grandchildren and nearly four decades of marriage.

While much has been made in the media of her husband's Mormon faith, Romney says that voters' fears are quickly allayed once they learn more about him and Mormonism. Romney's early polls numbers in Iowa, New Hampshire and Michigan were high because "people have gotten to know us," Ann Romney said. "In the early states where we have been spending the time, people have gotten over that."

His faith may be "actually an advantage in a strange kind of way, because you know the man has strong family values," she said.

Ann Romney is encouraging her husband to deliver a speech addressing his faith, much as when President John F. Kennedy spoke about his Catholicism while campaigning for the White House.

"I like to remember what it was like, because Mitt was the first Mormon I met, and I had reservations or questions about his faith as well," she said.

A recent magazine article suggested that Mitt Romney is uncomfortable talking about his faith. Ann Romney said the suggestion is inaccurate, and, she adds, her husband has experienced a form of "media-driven discrimination" when it comes to his religion.

Her husband wants to talk about running for president of the United States. "He does not want to talk about trying to convert people to his faith," she says.