Accessibility links
Many Pharmacists Now Administer Vaccinations Flu season is approaching, but you may not have to visit your doctor to get a flu shot. Most states now allow pharmacists to provide many vaccines, including flu shots. 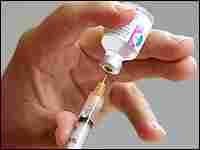 The American Pharmacists Association reports that the number of states allowing pharmacists to provide vaccines has more than tripled in 10 years. George Frey/Getty Images hide caption

As the flu season approaches, you may be thinking about getting a flu shot. Today, there are plenty of places you can go to get it and other vaccines: the supermarket, your workplace and increasingly, the pharmacy. And it's not necessarily a nurse or doctor who will give you your vaccine — it could be the pharmacist.

At the Medicine Chest pharmacy in McLean, Va., owner Ed Danoff has been providing his customers with an array of vaccines for the past eight years.

Located in the middle of town, the pharmacy is an 800-square-foot house crammed with all the usuals: cough and cold medication, and vitamins. But customers can now get any one of the following vaccines: flu, pneumonia, tetanus, hepatitis A, hepatitis B, HPV and shingles.

Patti Veliotes is 76, but looks much younger. She credits 30 years of vitamins, herbs, regular exercise and a good diet. But when it came to the possibility of shingles, Veliotes was concerned.

"I actually ... read about a lot of testimonials from people my age who have had shingles who had really, really bad cases and I thought, gee, I don't want to have that. Maybe I'd better go and get the shingles shot," Veliotes says.

Veliotes' doctor didn't have the shingles vaccine on hand. That's not unusual. Increasingly, doctors are opting not to provide these vaccines because reimbursement from private insurance and Medicare is often inadequate.

There are difficulties storing the vaccines, especially the new shingles vaccine, which must be kept frozen — and most vaccines have to be refrigerated. And because pharmacies are better able to make up any losses by selling "other" merchandise, they can take a greater financial risk than doctors.

The American Pharmacists Association reports the number of states allowing pharmacists like Danoff to provide vaccines has more than tripled in just 10 years. Today, 46 states allow it. States differ when it comes to rules about exactly which vaccines pharmacists can provide, what kind of training they need, and whether they need the supervision of a doctor.

In Danoff's case, it was no problem getting a physician to agree to be available for consultation if needed.

"This all started at the request of a local doctor who wasn't getting reimbursed enough for giving flu shots," Danoff says.

So in 1999, Danoff took the 20-hour vaccine-training course offered by the America Pharmacists Association. He learned how vaccines are made, how to give them and how to screen patients to see who should not get them. For example, because most vaccines are grown in eggs, "Anyone with an egg allergy must consult a doctor before getting vaccinated," Danoff says.

And Danoff's training has helped him steer clear of risks.

Danoff says that among the nearly 10,000 vaccines he has given at the Medicine Chest over the past eight years, he has never had a patient experience an allergic reaction. But if they did, like most pharmacists, Danoff is trained in CPR and has medication to treat a bad reaction until an ambulance arrives to take the patient to the hospital.

Dr. Kenneth Schmader is chief of geriatrics at Duke University Medical School. Schmader says most of the vaccines that pharmacists give are low-risk.

"I think it's a good idea from a public health perspective," Schmader says. "We try to remove as many barriers as we can to vaccination; having as many providers as possible to give a vaccine is a good thing, and that includes pharmacists."

Officials with the American Pharmacists Association report that they have vaccine-trained nearly twice the number of pharmacists this year than they did last year. And like Danoff, many of them say it is not only a service to customers, it helps business.

"I thought it'd be a nice way to get more prescription patients — just a way to get fresh, new faces in the pharmacy," Danoff says. "And so far, it has worked!"

And that is a big deal for small pharmacies like the Medicine Chest, which have to compete with huge, national, discount chains.