Accessibility links
Sex, Drugs and Rock 'N' Roll: Clapton After 'Cocaine' In his new memoir, guitarist Eric Clapton writes candidly about his many battles with drugs and alcohol. Now sober, the 62-year-old Clapton discusses his struggle to overcome his addictions and how he has turned to music for salvation. 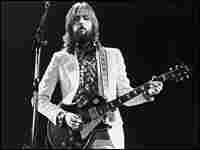 Eric Clapton performs in 1973. The guitarist battled addiction to drugs and alcohol for many years. Express/Getty Images hide caption 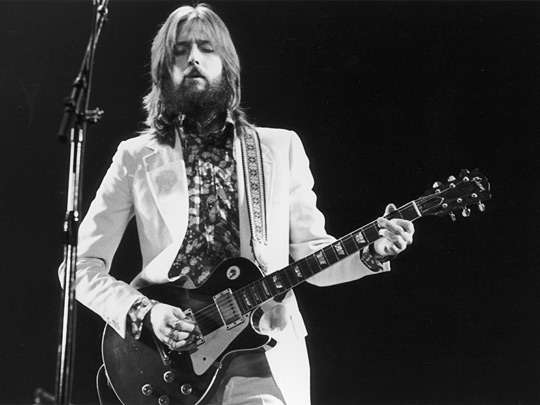 Eric Clapton performs in 1973. The guitarist battled addiction to drugs and alcohol for many years. 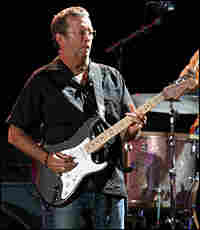 Eric Clapton performs during the Crossroads Guitar Festival held at Toyota Park in Bridgeview, Ill., on July 28, 2007. He is the author of a new autobiography, Clapton. Tasos Katopodis/Getty Images for Gibson hide caption

Eric Clapton performs during the Crossroads Guitar Festival held at Toyota Park in Bridgeview, Ill., on July 28, 2007. He is the author of a new autobiography, Clapton.

Second of a two-part interview.

In 1977, Eric Clapton released a version of the J.J. Cale song "Cocaine." At the time, Clapton was consuming copious amounts of cocaine — and alcohol — and had only recently kicked a heroin habit.

Now 62, the legendary guitarist looks back and wonders how he survived his decades of drug and alcohol addiction. Sober for 20 years, Clapton is the father of three young daughters, ages 6, 4 and 2.

Clapton writes about his many years of addiction in his new autobiography, Clapton. He calculates that he was spending the current equivalent of 8,000 pounds — about $16,000 — a week on heroin.

"Financially, it was ridiculous," Clapton tells Melissa Block in the second of a two-part interview.

"The thing about that kind of addiction that's pretty funny, on reflection, is that I always thought, 'I'm handling this. I can handle it. I can stop anytime. I just don't want to stop right now,'" he says.

During the three-year period that he was most deeply involved with heroin, Clapton says he stayed home a lot and did not perform live very often.

Later, when he had overcome his heroin addiction but was still battling alcohol abuse, he once performed lying down on the stage.

"It didn't seem that outlandish to me, and in fact, probably was all I was capable of. It was either that or just laying down somewhere else. The fact that I was laying down on stage means at least I showed up," Clapton says.

He characterizes the mid-1970s as a time that was "extremely casual and crazy ... when anything was possible."

"I think in the book I did refer to the fact that there were people who were moving through that period with respect and dignity, and I just didn't run into them that often," he continues.

Even during these dark days, the music kept him going.

"The presence of music in my life has always been the salvation element of it. Not necessarily the playing, as much as just being conscious of it, listening to it, has kept me moving," Clapton says.

Clapton says he doesn't think his music suffered that much as a result of his addiction — he thinks if it had, it would have brought him to recovery earlier — and he expresses mixed emotions about his past.

"I don't know that I can honestly regret any of it safely, because it's brought me to where I am. My life would not be the same, and I would not have what I have today, were [it not] for the fact that I went through all this stuff," Clapton says.

"But I suppose if I do have any regrets, it is that musically I lost something there."

Sobriety brought its own challenges.

Making music without drugs and alcohol was very difficult initially — everything sounded so loud and rough to him — as was sex.

"It was funny because both [of] those things were things that I took for granted. And yet, without alcohol, both of them became very, very difficult and unmanageable," Clapton says.

He says that his earliest experiences with women were always fueled by alcohol.

"And so when you took it away, I just didn't know what to do and actually was, for quite a while, physically impotent. I was terrified. I would be paralyzed with fear. And I think, musically, it was the same," he says.

Despite his age, Clapton says he plans to continue touring ("It's something I will ways need"), although the days of huge tours are probably behind him.

"I don't think those big world tours are possible for me anymore, nor are they desirable, because there's somewhere else I'd rather be — with my kids and my wife. The home life has a lot of power for me now, and it's where I get most of my satisfaction," Clapton says.