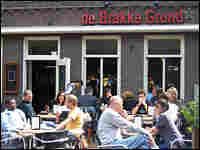 De Brakke Grond, or The Brackish Ground, is located on a quiet street in Amsterdam. Emily Harris, NPR hide caption 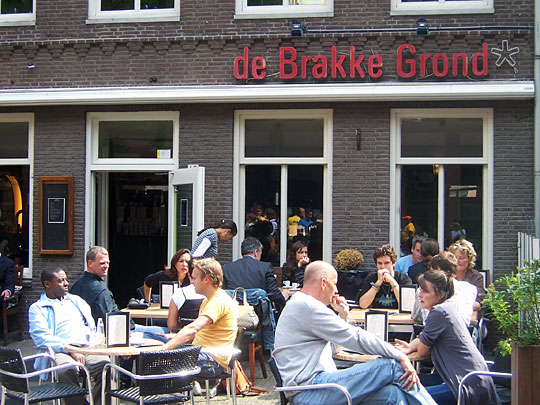 De Brakke Grond, or The Brackish Ground, is located on a quiet street in Amsterdam. 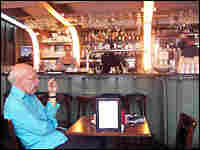 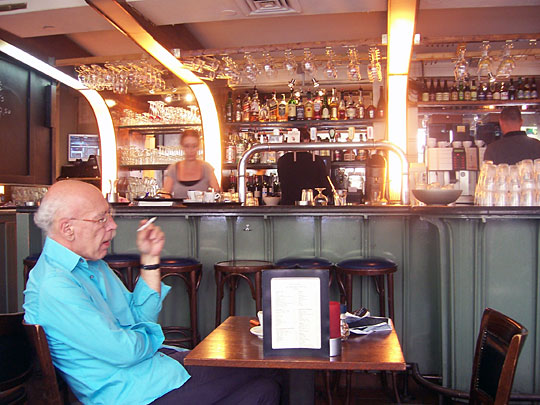 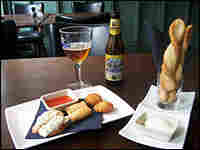 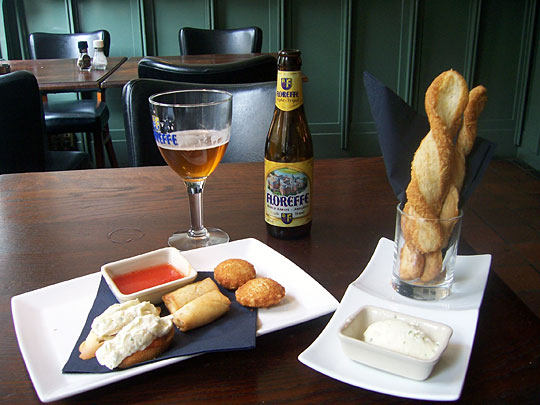 The menu features "Flemish tapas" — and, of course, plenty of beer.

There are a million great places to eat in busy Amsterdam — but sometimes all you want is out of the throngs of tourists that seem to be everywhere. It's not so hard to sneak away. Just one short block off Rokin Street, Amsterdam's overcrowded main drag, is quiet Nes Street. At number 43 is De Brakke Grond, or The Brackish Ground, serving up snacks and drink from mid-morning to late night, in an atmosphere much more pleasant than the name suggests.

The early afternoon crowd is young and very Euro: small, round glasses, earnest looks, T-shirts and clean jeans or a liberal interpretation of "business attire." Tables in the calm brick square outside fill up fast on sunny days and only a few wandering tour groups disturb the sense you've stumbled on to a haunt of ordinary Amsterdam. There's no stunning view, just crowded bicycle racks and one urban tree in a square of soil.

Inside, the upstairs gets hopping in the evening. The sensibility is brasserie: painted wood paneling, narrow mirrors and the day's beer specials listed on a blackboard.

The unappetizing name is intended to reflect the mingling of cultures, as salt and fresh water mix in an estuary. The restaurant is owned by the Vlaams Cultuurhuis, the Flemish Culture House next door. Thus the specialty is Flemish cuisine, although for lunch that's limited to snacks — "Flemish tapas" — and, of course, beer.

The Hartiges kaasstengels met geitenkaasdip (hard cheese sticks with goat cheese dip) sounded like it might be only for serious cheeseheads, but it turned out to be light and flaky twisted pastry sticks with a delightful, salty twang. The fresh goat cheese, almost as wet as yogurt, was soothingly mild.

The dinner menu is more extensive, and more Flemish. Try the baked endive — a slow-roast casserole with butter, honey, bacon and plenty of cheese. Expect to spend about $35 to $40 per person for dinner (starter, entree, drink and coffee).

But during the day, this is more a spot to linger over liquid than stuff your stomach. Far more coffees are served between noon and 1 p.m. than anything to eat. The extensive beer selection includes bottles and six taps. If it's lunchtime and you're planning to do anything besides wander that afternoon, check the alcohol content — it's often high.

Flemish elements are not easy for nonexperts to detect. In fact, you might be forgiven for thinking Flemish and Dutch culture, including food, are quite similar. But Leen Laconte, general director of Vlaams Cultuurhuis, says historic differences still influence the two cultures, particularly religious differences. The Flemish are traditionally Catholic, while Protestantism and Calvinism were the predominant religions of the Dutch.

Laconte says this cultural difference is still seen in attitudes toward eating, if not ingredients and menus.

After you've eaten, check out the Cultuurhuis offerings, which include a rotating exhibition of works by young Flemish artists. For those who speak the language, there are Flemish theater performances, as well.

The center has its own peculiar history reflecting the mingling and separation of cultures. When it opened 28 years ago, its mission to promote Flemish culture was fully funded by the culture ministry of what was then Belgium's federal government. Later, the increasing demand for autonomy by the French and Flemish communities in Belgium led to control of their own cultural and educational affairs. Vlaams Cultuurhuis became a foundation, subsidized by Belgium's Flemish culture ministry.

The cafe is, in a way, an easy-access public-relations arm — a place where an aimlessly wandering mind, influenced by a flyer or poster, might alight on the topic of contemporary Flemish art.

Perhaps the service, slow even by European standards, is a touch of the Flemish approach to enjoying a meal. It takes a while to get even a beer. But a helpful waitress did quickly bring a spoon after she watched me dip my cheese sticks into the cheese dip.

"It's easier that way," she volunteered as she set the teaspoon on the table.

I have no idea whether she meant easier to spread the cheese on the cheese sticks or just to eat it by the spoonful. Is one the Dutch style and one Flemish? Both ways work.