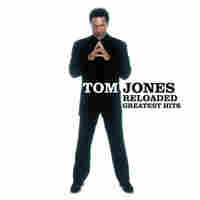 Pop icon Tom Jones first gained fame with the 1960s hits "It's Not Unusual," "What's New Pussycat?" and "Delilah." In the last 40 years, he has released more than 30 hit singles and several gold and multi-platinum records. In his heyday, he was famous for live performances and the frenzy he caused among his female fans — many threw their underwear onstage and rushed the stage. Jones' name today connotes hipness and romance. His newest release, Reloaded: Greatest Hits, is made up of 19 new and re-mastered tunes.