Listen
Iron and Wine: Songs of Love and Death 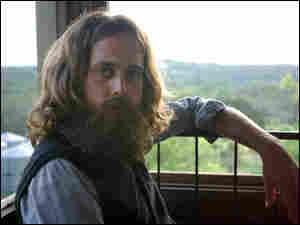 Years ago, a South Carolina-born musician called Sam Beam wandered into a general store and found a dietary supplement called "Beef Iron and Wine." After dropping the "Beef," he'd found a moniker for a band whose music would go on to evolve from spare acoustic solo recordings to fully fleshed-out roots-rock.

Beam's first album, 2002's The Creek Drank the Cradle, found Beam writing, performing, recording and producing every track by himself at a studio in his home. Featuring acoustic guitars, banjo and slide guitar, its music has been compared to that of Nick Drake, Simon & Garfunkel, Neil Young and Ralph Stanley. It's often characterized as alt-country, progressive folk or indie folk, with painfully intimate songs about love and death.

Our Endless Numbered Days continued Iron and Wine's acoustic approach, but the 2004 album was recorded in a professional studio with a significant increase in fidelity. The expansion of the band's sound continued with two EPs: Woman King and In the Reins, the latter of which was recorded with the atmospheric indie-rock duo Calexico.

Last month, Iron and Wine released a diverse and progressive album called The Shepherd's Dog, which has already earned strong sales and excellent reviews. In this segment, Beam talks about the disc's status as a "headphone record" and praises Tom Waits, while pointing to South Carolina as an inspiration for his lyrics.