Accessibility links
Farmers May Switch Crops Due to Labor Shortage Farmers may change their crops due to the shortage of immigrant labor. Of all crops, fresh fruits and vegetables are the most labor intensive. Lettuce, strawberries and broccoli all have to be picked by hand. In Arizona, one farmer passes on chili peppers to plant corn, which is harvested by machine.

Listen
Farmers May Switch Crops Due to Labor Shortage

Farmers may change their crops due to the shortage of immigrant labor. Of all crops, fresh fruits and vegetables are the most labor intensive. Lettuce, strawberries and broccoli all have to be picked by hand. In Arizona, one farmer passes on chili peppers to plant corn, which is harvested by machine. 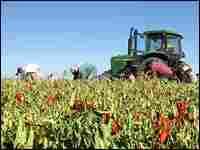 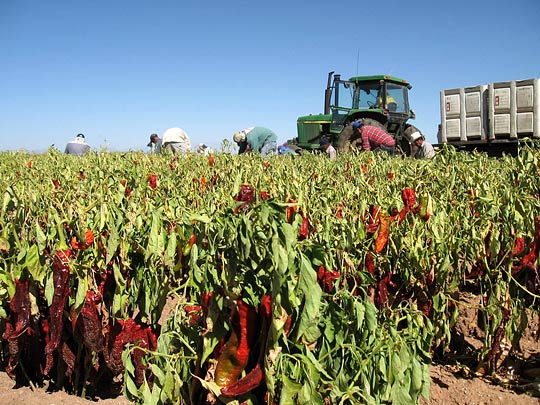 The shortage of immigrant labor may actually change the crops that get planted. Of all crops, fresh fruits and vegetables are the most labor intensive. Lettuce, strawberries and broccoli all have to be picked by hand. And right now it's harvest season for chili peppers.

On at least one farm, 50 miles from the border in Arizona, a lack of labor has forced some changes.

TED ROBBINS: The smell from the hot chili peppers being processed in Ed Curry's metal-sided barn is so pungent it can make you cry. Seems like an appropriate setting for Ed Curry to admit what other farmers won't.

Mr. ED CURRY (President, Curry Seed and Chile Co.): All farmers are whiners. You just got to know that that's part of the deal.

ROBBINS: The weather, the water, or in this case the lack of workers. We hop into Curry's pick-up and go out to the fields - quiet fields.

Mr. CURRY: We're standing in a field of cut corn that was raised for ethanol. Not too many years ago there would have been green chili here.

ROBBINS: After 37 years, Ed Curry is not planting green chili here - the kind used for chili rellenos - because corn can be harvested by machines; green chili can't.

Mr. CURRY: And it would take about 250 people to pick that. With immigration tightened up the way it is, well, number one, we just can't get the labor.

ROBBINS: Curry did plant red chili - grown for hot sauce, paprika and seed. A crew of about 50 people picked the peppers.

ROBBINS: About seven years ago, Ed Curry was busted for using illegal labor. These workers are legal. They go back and forth from Mexico each day, making seven to $8 an hour. Most are in their 50s and 60s. One man is 72 years old. Younger workers can't get visas or don't want the jobs. So as his workers age and his workforce dwindles, Ed Curry says he's thinking about moving some of his operation to Mexico.

ROBBINS: That's one farmer's plight. The Western Growers Association based in California represents 3,000 farmers across the region. Its president, Tom Nassif, says farmers need Congress to pass legislation that will allow more workers in, something he says it should've done already.

Mr. TOM NASSIF (Western Growers Association): The Congress is derelict in its duty when it doesn't provide answers to difficult problems for Americans and those involved in this economy.

ROBBINS: Nassif says his association polled a dozen members and found more than 40,000 acres had moved to Mexico in the last year or so.

Professor PHIL MARTIN (UC Davis): There has been far too much anecdote and not near enough analysis.

ROBBINS: Martin is an expert in farm labor and immigration at UC Davis. He says there is no proof that overall U.S. fruit and vegetable production has been affected by a labor shortage. Wages have not gone up as you'd expect. And over the last six years, Martin's production figures show...

Mr. MARTIN: The vegetables are roughly the same. There's been really no change. In fresh fruits there's actually been an increase.

ROBBINS: That's right. Fruit and vegetable production have not dropped. Martin says while some farmers do face labor shortages, others are adapting.

ROBBINS: That is a machine harvesting red chili in Pearce, Arizona, Ed Curry's neighbor. It's a converted tomato-picking machine, and it's far from perfected. It broke down while we were there. It picks up a lot of debris along with the vegetable, and it would destroy the more tender green chili. But it only takes two or three people to run.

Prof. MARTIN: In the long run, what makes American agriculture competitive internationally is that we have very high productivity, and that usually means substituting machines for people.

ROBBINS: Chili farmer Ed Curry is all for that. He's testing a hybrid: a cross between an Anaheim chili - the standard big green chili - with a cayenne pepper.

Mr. CURRY: And so that stem, for the most part, pops off.

ROBBINS: You're just pulling the stem off.

ROBBINS: This could be the first machine-harvested green chili. But it'll be a long time before that happens. In the meantime, farmers say they still need more legal farm workers to pick their crops.