Accessibility links
Georgie James: In Defense of Looking Back While many contemporary songs draw from The Kinks' early garage-blues sound, later acoustic folk-rock or penchant for storytelling, Georgie James' "Henry and Hanzy" reflects the band's strong sense of nostalgia and the way it was influenced by old musicals.

Georgie James: In Defense of Looking Back

Georgie James: In Defense of Looking Back 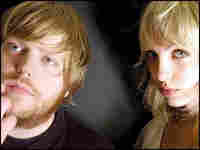 Former Q and Not U drummer John Davis and singer-songwriter Laura Burhenn, who make up the core of Georgie James, are huge fans of The Kinks. While many modern musicians with similar influences draw from that band's early garage-blues sound, its later acoustic folk-rock or its penchant for storytelling, Georgie James prefers two essential but understated features of The Kinks' albums: their strong sense of nostalgia and the way they're influenced by old musicals.

"Henry and Hanzy" opens with a bombastic cymbal-crash, not unlike a dramatic theatrical entrance, before swirling into a relaxed music-hall number, complete with breezy parlor piano lines and a crisp acoustic guitar. A simple, cheerful refrain of "I think you should start to sing along" complements campier sounds such as tambourine and syncopated handclaps. Davis and Burhenn's musical nostalgia is summed up nicely when they sing, "The future is boring and takes too long," a suitable catchphrase in a world of retro-chic. But it also remains a bracingly genuine statement about humanity's timeless longing for lost time.