Accessibility links
Mick Jagger: A Stone Alone The star has just released The Very Best of Mick Jagger, the first overview of his many solo projects since 1970. He recently discussed the CD, the current state of the music scene and whats different about working without the Stones.

Listening to Mick Jaggers solo work, it's difficult to think of it as not being the Stones: His voice is that distinctive and familiar. But when the Stones have been most unlike their rocking, bluesy selves, its because of their lead singer. While drummer Charlie Watts remains the jazz enthusiast and guitarist Keith Richards is the roots-music stalwart (permanently devoted to the blues, reggae and Chuck Berry), Jagger has always urged the Stones to experiment with up-to-date urban music styles and the latest studio technology.

The three tracks below are among the long-unreleased surprises on Jaggers first solo retrospective, a collection that reveals an enduring propensity for trying it all, from country ballads to techno dance rhythms.

Originally a dance-infused demo, "Charmed Life" was concocted in Jagger's home in France with guitarist Jimmy Rip during the making of 1993's Wandering Spirit. I always liked the song, but we didnt use it," Jagger says. "And then I thought, 'OK, well put it out, so what are we gonna do with it?'" He remixed the track with the help of friend Ashley Beedle. "We didnt change the beats that much, but we just put new kinds of sounds on it. Ive got a lot of remixes on this one. Intriguing footnote: Thats Jaggers oldest daughter, Karis, on backing vocals.

An electric blues classic from harmonica legend Sonny Boy Williamson gets a hard-driving treatment with the help of an L.A. club band that Jagger discovered while recording Wandering Spirit. On a whim, he and producer Rick Rubin dove into a full day of recording with a blues band called The Red Devils." We didnt have a lot of time and we wanted to get a lot of tracks," Jagger says. "So this is one of the most spontaneous tunes on the collection.

An energetic soul number originally recorded by a group called 100 Proof Aged in Soul in 1969, this version dates from 1973, when an all-star cast of rockers assembled in Los Angeles between projects, each itchy to make music. It was all for fun — the best session men in town, Jagger says. Produced by John Lennon and featuring his guitar work, That was just one or two takes."

Its been 45 years since Mick Jagger first grabbed the microphone and began singing with a youthful band of blues enthusiasts called The Rolling Stones. Today, the Stones are an industry unto themselves, and Jagger stands as one of the most legendary -- and still outrageous -- stars in rock. 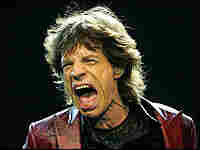 The veteran singer has just released The Very Best of Mick Jagger, the first overview of his many solo projects since 1970. Jaggers music, with or without The Rolling Stones, has always struck a balance between careful studio craftsmanship and raw, spontaneous energy.

"When youre doing recording, theres a very fine line to get something as good as you know you can get it -- and as crafted as you want it," he says in an interview. "A lot of people record songs line by line. I like to do the whole song and the whole song again, whole song again. And then you can pick what you want from that.

"So instead of doing 50 takes of it in a row, you do four takes of it, and then you wait a couple of days and come back and do another four takes. The overall feeling that you want people to get is you opened your mouth and it came out just like that. But, of course, life isnt really like that."

Once Jagger leaves the studio, though, he prefers to leave the music behind. Hes dismissive of the tag timeless or classic when applied to rock songs: "I think the more you keep banging away," he says, "the more it becomes a classic, doesnt it? Repetition is everything."

He claims not to have a favorite among more than 40 Stones and solo albums ("I mean, theres some I like more than others, Im sure), and only with discomfort does he choose what he would consider a Stones signature tune.

One track is really difficult," he says. "If I had to play some young person something, I could play them Satisfaction. I think that would be very illustrative of what our music is and how its constructed.

I dont play a lot of my own music to myself, you know. I know people that play their music all the time for themselves, but I just dont. So this is like the very few times I get to listen to it.

The Very Best of Mick Jagger is the very straightforward title of a new CD collection that features 17 songs he recorded over 35 years -- without any of the Stones.

"If youve been in a band for 40 years, I think you should be doing a lot of work on your own, as well," Jagger says. You get a certain amount of freedom if you do a solo record which you dont really have if youre in a band.

The music on the CD is a mixed bag: fun and funky, with lots of high-energy rockers, a few radio hits and collaborations with the likes of David Bowie, Lenny Kravitz and U2s Bono. There are also a few first-time releases, like a dance track called Charmed Life, as well as "Too Many Cooks (Spoil the Soup)," a soul tune from a late-night session put together by John Lennon in 1973. Theres even a country-flavored weeper, "Evening Gown." At least one element brings these different flavors together.

"Theyre all sung by me. But thats about it," Jagger laughs. "No, I think you want to show yourself in as many facets as possible. A lot of these songs are very lighthearted and sarcastic. And then some of them are kind of heartfelt, and some are just for dancing.

I just picked the tracks that I thought were the best, and I didnt want to have too many ballads, 'cause I wanted the whole thing to have a very up-tempo feel. I tried to show as many kinds of emotional moods as I could on this collection."

While Jagger took on side projects during the 60s and 70s, it wasnt until 1985 that he decided to attempt a solo career, releasing the album Shes the Boss. So what was the reaction from the other Stones when he took that leap?

When you work with people in any creative endeavor, they never like you to do anything else. They just want you to work with them. Thats just a sort of a knee-jerk reaction. I mean, you sort of understand it, but personally, I dont mind.

At the time, the Stones would do one album every three years and that was it. I thought, 'Its just not enough.' I mean, 12 songs at a time? I had far too many songs of my own for The Rolling Stones to record. I could say, 'OK, make more Rolling Stones records,' but they take a long time to make and are quite complicated, and then you go on tour and all those things. I think that was the real driving force of my going solo.

In 1989, with two solo albums and a brief Stones-less tour behind him, Jagger returned to the fold. He continues to create music under his own name, but his front-man role in the group he founded remains his primary commitment. What did he learn that he would not have experienced with the Stones?

"In the end, Im a singer and Im just singing. Thats what I do, and thats what I do with The Rolling Stones, as well. People say, 'It must be really different!' Its not really that different. Youre singing, and no one else is in the studio, its usually midnight and it doesnt really matter whos playing in the end. As long as it sounds good to you."

Much has changed in the music business over the course of Jaggers career. He gets a feeling of déjà vu in todays world of song-by-song downloads.

"At the beginning of my career, we didnt make albums, really," Jagger says. "We used to make just songs, you know, and then eventually the album format came. I mean, there was a pre-rock period when singers with bands were doing them, like Frank Sinatra and Songs for Swinging Lovers , lets say. Then rock bands like Led Zeppelin or Pink Floyd or The Rolling Stones created albums.

But given the state of music-buying, I dont know how long this idea of making an hour and a half of music, in one thought process, is going to survive. I think in a lot of ways it's evolved -- its gone 'round in a huge circle."

Sir Mick Jagger turned 64 in July. The years have been good to him. Hes healthy -- still touring, still recording and still looking for ways to bottle the lightning. Anything else on the horizon?

Were just finishing this movie with Martin Scorsese -- The Rolling Stones performing mostly at the Beacon Theater [in New York City]. Its called Shine a Light and is coming out next April. Ive got lots of other movie projects that I hope will come to fruition, but theyre very long and difficult, and Im gonna start doing some songwriting as soon as I can.

Ashley Kahn is the author of A Love Supreme: The Story of John Coltranes Signature Album. The CD The Very Best of Mick Jagger has just been released.