Accessibility links
Soul Cakes: Hallowed Offerings for Hungry Ghosts Forget the Reese's Pieces and Tootsie Rolls: This year, appease the malevolent spirits roaming the earth on All Souls' Eve with soul cakes. T. Susan Chang shares the story of and a recipe for the sweet and steaming treats. 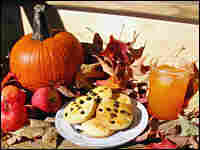 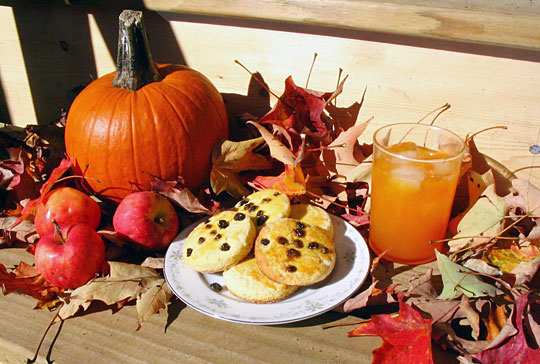 Soul cakes and iced pumpkin juice satisfy the hungry, both living and dead.

T. Susan Chang is a New England-based freelance writer who recently served as a former Kellogg Food and Society Policy Fellow. She also is the Boston Globe's regular cookbook reviewer, and her articles on cooking, gardening and nutrition appear in a variety of national and regional publications. You can find more information at her Web site, tsusanchang.com.

Even at its most lighthearted, Halloween has a chilly soul. There is no denying it: All Hallows' Eve belongs to the lord of death, who masters us all in the end. We may cope with our servitude by laughing at death, fearing it, respecting it — or, in time-honored tradition, by throwing sweets at it.

Today, we assuage malevolent spirits — the ones in costume, as well as those unseen — with Reese's Pieces and Tootsie Rolls. I guess modern demons aren't too picky and they know how to negotiate a plastic wrapper.

Long ago, however, at the beginning of the Christian era in Britain, Druidic rites were a fresh and vivid memory. Four times a year, bonfires banished the ill-tempered spirits hiding in the night. The Halloween, or Samhain, fires might have been a way of whistling in the dark, laughing in the face of the oncoming cold and scarcity.

Samhain was the festival of the dying sun god, and its dark power stayed potent even as the old ways faded. Samhain became All Souls' Eve and All Souls' Day. The practice of gathering round a bonfire waned. Instead, night visitors of the Dark Ages began to venture abroad, going house to house. If they were lucky, they would be met at the doorstep with a plate of sweet and steaming soul cakes.

Explanations on the origins of soul cakes vary. Some say that cakes were baked for the bonfires and that they were a lottery: pick the burnt cake, and you get to be the human sacrifice that ensures good crops next year. Or, soul cakes may have been tossed around an area to appease evil spirits condemned to wander in animal form.

By the 8th century, though, soul cakes had been sanctified and civilized. They were used to pay the beggars who came around on All Souls' Eve and offered to say prayers for the family's departed. One cake given, one soul saved — cheap at the price.

Elsewhere, they were given to the costumed entertainers known as mummers, who made their merry rounds at Halloween. Today's trick-or-treaters are thought to be their descendants.

Vexatious for the interested cook, soul cakes seem to have been as various in form as in purpose. I've seen dozens of recipes, some leavened and rising heavenward, others flat and dense as tombstones. Some are cakey and some are biscuity. Some are gingery and some are saffrony. They may be square, oval or round, marked with a cross — or not. That's the thing about myths: The fact that there's never a single right answer doesn't diminish their power.

I liked the idea of a round soul cake, yellow with saffron and egg yolk like the dying sun itself. Or yellow like the bonfires of Samhain, from which the Celts would take burning torches to start their own hearths for the new year.

Like many folkloric recipes, the one I tried was vague, calling for "enough milk for a soft dough," and giving no instructions as to forming the cakes. Mine turned out hard, tough and undercooked. I had to remind myself that this was about honoring the dead, not trying to imitate them.

After a few more tries and adjusting the time, temperature, quantity of dry and wet ingredients and thickness of the dough, I had a sunny yellow biscuit with a sweet saffron scent. Studded with a currant cross and small enough to fit in the palm of my 6-year-old son's hand, it felt like a talisman — a peace offering for implacable spirits, or edible currency for the ferryman of the dead. Or — with some Harry Potter-style iced pumpkin juice on the side — an after-school snack for a kid and his inner Dementor.

What should you do with your soul cakes? Eat them, share them, fill them with currants and scavenge for crumbs. But while you do, spare a thought for the hungry ghosts who walk the earth for just one night. 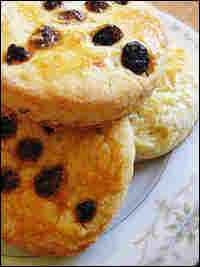 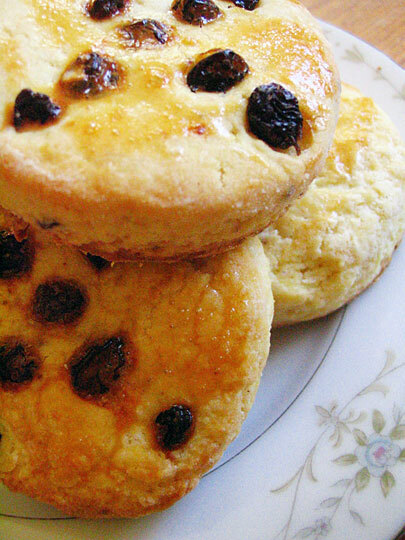 Soul cakes get stale within a day or two, so eat 'em while they're hot.

Combine the flour, the nutmeg, cinnamon and salt in a small bowl. Mix well with a fork.

Crumble the saffron threads into a small saucepan and heat over low heat just until they become aromatic, taking care not to burn them. Add the milk and heat just until hot to the touch. The milk will have turned a bright yellow. Remove from heat.

Cream the butter and sugar together in a medium bowl with a wooden spoon (or use an electric mixer with the paddle attachment). Add the egg yolks and blend in thoroughly with the back of the spoon. Add the spiced flour and combine as thoroughly as possible; the mixture will be dry and crumbly.

One tablespoon at a time, begin adding in the warm saffron milk, blending vigorously with the spoon. When you have a soft dough, stop adding milk; you probably won't need the entire half-cup.

Turn the dough out onto a floured counter and knead gently, with floured hands, until the dough is uniform. Roll out gently to a thickness of 1/2 inch. Using a floured 2-inch round cookie or biscuit cutter, cut out as many rounds as you can and set on an ungreased baking sheet. You can gather and re-roll the scraps, gently.

Decorate the soul cakes with currants and then brush liberally with the beaten egg yolk. Bake for 15 minutes, until just golden and shiny. Serve warm, with cold pumpkin juice.

Pumpkin juice has an earthy, starchy flavor with a trace of corn-like sweetness. It's not especially delicious on its own, but is a powerfully appealing quencher when mixed with other juices. You will need a fruit or vegetable juicer for this recipe.

The easiest way to peel a pumpkin is to use a sturdy serrated knife. Set the pumpkin down firmly on its bottom. Steady it with one hand while you saw off the peel in vertical strips, tracing the round form of the pumpkin as you saw downward. Split the pumpkin in half and scoop out the seeds (discard or reserve them as you wish). Chop the pumpkin flesh into chunks small enough to fit in your juicer.

Juice the pumpkin chunks following your juicer's instructions. You should have 2 to 3 cups. Strain the juice into a pitcher and add apple and pineapple juice to taste. Serve iced.